Many people use $1 million as a benchmark for retirement savings. But will you need that much in reality? It depends on your circumstances.

When we talk about saving for retirement, we tend to throw around the $1 million figure as a target to aim for. Why $1 million? Perhaps people are drawn to that number because it's nice and round, and also substantial. After all, $1 million seems like it would make for a pretty comfortable retirement.

Of course, there are also those folks who insist that it's possible to get by on a lot less. And in some cases, that may very well be true. But for the most part, even if you're an average earner, that $1 million might actually be the right number to save for. 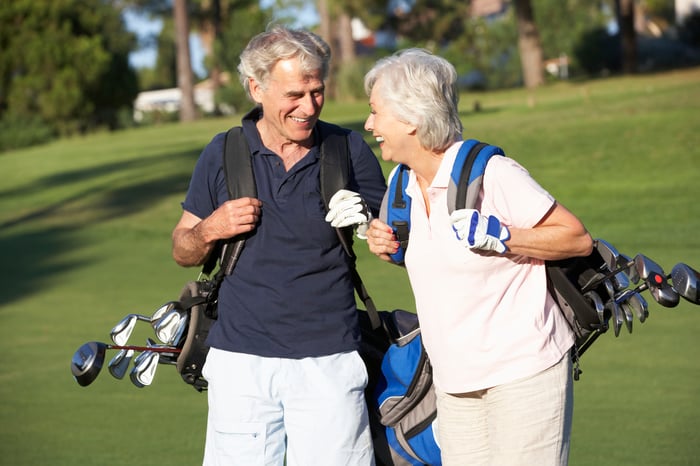 How well do you know your retirement costs?

I can imagine what you're thinking: "I don't need $1 million to retire, because I don't live an expensive lifestyle." But be that as it may, there are still a number of unavoidable costs you're apt to face as a retiree, whether you're the extravagant or frugal type. Let's start with healthcare, the one expense that almost universally goes up for seniors.

Even with Medicare benefits, according to the latest projections, a healthy 65-year-old couple today can expect to spend $400,000, if not more, on healthcare throughout retirement. And that doesn't even include long-term care. Assuming a 20-year retirement, that's $20,000 a year.

Now let's look at some other obvious costs in retirement, like housing, transportation, food, and clothing. Here's what seniors today are currently spending on all of these:

Now, if we add in that $20,000 a year in medical care from above, we arrive at a yearly total of $49,305. Of course, we also need to account for things like water, heat, electricity, phone service, and cable. (If you think you're not going to watch TV once you're retired, think again.) While those costs might vary based on where you live, it's reasonable to say that you'll spend another $4,000 annually, if not more, bringing our total up to $53,305.

Then there's leisure, the one cost you can control -- but only so much. While there's a difference between spending most of your days traveling versus staying local, given the amount of free time you'll have on your hands, it's fair to assume that you'll spend at least $200 a month, as a couple, on entertainment. And that's an extremely modest estimate. But if we factor it in, we now arrive at an annual spending total of $55,705. The question is: Where will it come from?

How much will you need to save?

Now at this point, you're probably sitting there thinking: "See, I was right." But wait, because there's one major expense you haven't yet accounted for: long-term care.

An estimated 70% of Americans 65 and older will end up needing long-term care, and generally speaking, it's not covered by Medicare. According to the latest estimates, it costs $82,125 a year for a semi-private room in a nursing home, or $92,345 for a private room.

Imagine you wind up needing nursing-home care for five years, and you don't have long-term care insurance to help pay for it -- which is the case for many folks, since those premiums are quite expensive. Even if you go with the cheaper option, you're looking at an additional $410,625 right off the bat ($82,125 x five years). If we tack that onto the $461,300 from above, we get a new total of $871,925.

Now let's go back to leisure for a minute. In the above calculation, we budgeted in $2,400 a year in entertainment costs. But what if you want to spend your first five years of retirement traveling extensively, and it costs $20,000 a year to do so on top of that $2,400 we originally talked about? Suddenly, you're looking at another $100,000, bringing our total up to $971,925.

And let's not forget home repairs. Granted, you may not own property in retirement, but if you do and your foundation starts sinking, or your heating system goes, you could easily be on the hook for $10,000, $20,000, or more. Suddenly, we're pretty much right at that $1 million figure.

Of course, all of these calculations are based on different assumptions and scenarios that may or may not apply to you. My point here isn't to convince you that you absolutely need $1 million to retire. Rather, it's to show you that you may wind up needing, or wanting, that much money -- depending on how life plays out.

Maybe by now you're convinced that $1 million isn't just a crazy number to aim for after all. The question is, how do you get there? And the answer is simple: Start saving early on. If you give your money time to grow, you can turn a series of smaller contributions into $1 million over time.

Imagine you're able to set aside $750 a month for retirement. If you do so consistently for 30 years and your investments generate an average annual 8% return -- which is just below the stock market's average -- you'll wind up with just over $1 million in your nest egg. On the other hand, if you wait even five years to start saving at that level, you'll have just $658,000 to work with. Along these lines, if you give yourself an extra five years to save, you can reduce your monthly retirement plan contributions to $500 and still come away with $1 million at the end of the day, assuming that same 8% return.

Regardless of whether you think you'll need $1 million to retire, that figure isn't nearly as out of reach as you might think it is. If you make a point to start saving early and invest your money wisely, you could wind up a millionaire in time for retirement. And while you may not end up spending all that money, it certainly won't hurt to have it available.