There's no question that healthcare is expensive, and sometimes, all it takes is an unforeseen illness or injury to send your finances on a downward spiral. Last year, 20% of Americans under 65 experienced difficulty paying their medical bills despite actually being insured. And of those, 63% depleted their savings to cover their healthcare costs, while 42% were forced to take on extra work to keep up with their medical spending.

Not only do countless Americans struggle with healthcare bills, but medical debt is actually the No. 1 reason U.S. adults file for bankruptcy. It's therefore encouraging to hear that come September 2017, consumers who are forced to take on medical debt won't have their credit damaged nearly as much. 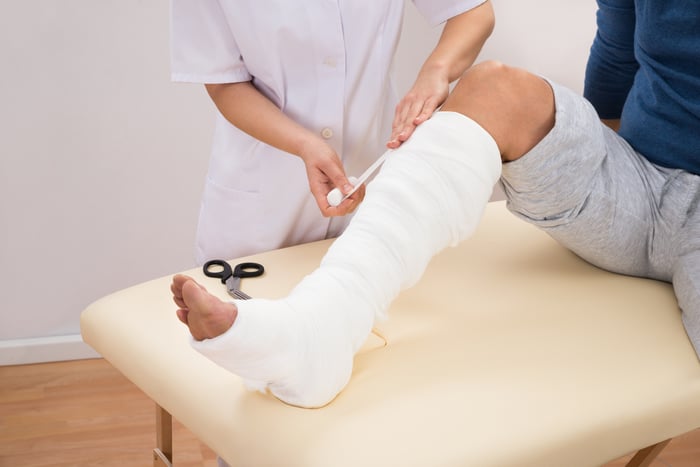 Beginning on Sept. 15, Experian, Equifax, and TransUnion -- the country's major credit bureaus -- will establish a 180-day waiting period before including medical debt on consumers' credit reports. The purpose of this is to give patients time to sort out medical disputes with insurance companies and providers, which often result in credit-zapping payment delays. Additionally, the three bureaus will begin removing medical debt from consumers' histories once it's paid by insurers.

The goal in implementing these changes is to protect consumers who are often caught off guard by healthcare costs. Not only can medical bills be a huge financial burden, but they can also cause consumers' credit scores to plummet, and once that happens, borrowing becomes more expensive across the board.

Furthermore, those who are eventually driven to bankruptcy due to medical debt must typically wait 10 years before that information is removed from their credit reports, during which time securing an apartment, auto loan, or credit card can be difficult, if not impossible. The fact that consumers will soon be cut a bit of extra slack will no doubt help countless Americans preserve their credit, and their finances, in the face of mounting bills.

How medical debt can wreck your credit

As you can see, of the above-listed components, payment history carries the most weight, and it speaks to your ability to pay your bills on time. If you're late on a medical bill, either because you don't have the cash to pay it or you're stuck in a battle with your insurance company, it can easily bring down your credit score. If you're late on a series of bills, your score could get damaged even more. What these new changes will do is extend that window of time before those late medical bill payments are held against you, so that if it takes you up to six months to resolve an insurance issue or come up with the cash to pay off a bill, your credit score won't take a hit in the process.

Not surprisingly, these changes are expected to help a large chunk of the population avoid credit score damage going forward. According to a 2014 report by the Consumer Financial Protection Bureau, an estimated 43 million Americans are in collections for medical debt. Not only that, but for 15 million consumers, medical debt is the only source of negative activity on their credit histories. In other words, even folks who are financially responsible for the most part can easily fall victim to medical debt, so the more leeway the public is given, the better.

Of course, the best way to protect yourself from medical debt is to build an emergency fund with three to six months' worth of living expenses in the bank at all times. This way, you'll have reserves to dip into should you end up facing a whopper of a bill.

Though giving consumers more time to resolve medical billing issues is a step in the right direction, it doesn't address the underlying problem -- that a growing number of Americans simply can't keep up with their healthcare costs. And until something is done about that, we're likely to see many more credit score declines and bankruptcy filings in the coming years, even with these otherwise positive changes.