Please ensure Javascript is enabled for purposes of website accessibility
Log In Help Join The Motley Fool
Free Article Join Over 1 Million Premium Members And Get More In-Depth Stock Guidance and Research
By Maurie Backman – Jul 17, 2017 at 6:09AM

The idea of retiring would be much less stressful for most of us if we could somehow pin down the right amount to save. After all, it's hard to say what our living costs might look like five, 10, or 30 years down the line. Not only that, but because we all have varying goals and needs in retirement, it's pretty much impossible to come up with a single number that will work well for all seniors across the board.

If you're struggling to nail that retirement savings number, here's some info that should help to simplify the process. According to the Social Security Administration, the average 65-year-old man today can expect to live until 84.3, while the average 65-year-old woman can expect to live until 86.6. Meanwhile, according to the U.S. Census Bureau, the average retirement age in the U.S. is 63. Using these numbers, we see that the average American male should plan for a 21.3-year retirement, while the average woman should plan for 23.6 years. If we take these numbers and meet in the middle, we're looking at about 22.5 years of retirement to fund.

From there, it's just a matter of coming up with enough money to provide the annual income we'll need when we're older. 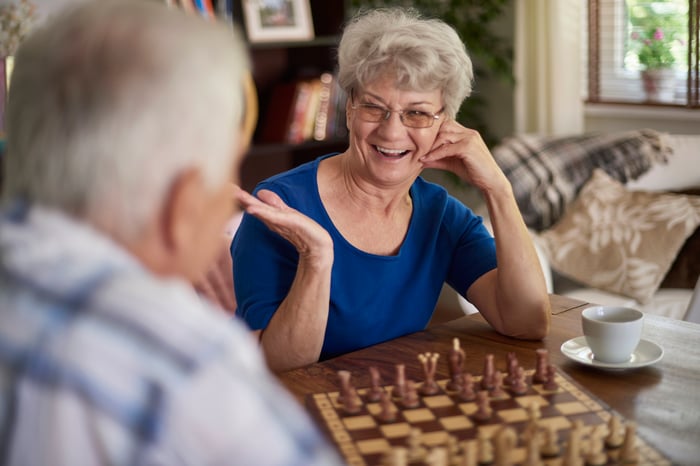 The old rule of thumb used to be that seniors could get away with living off 70% to 80% of their previous income in retirement. But given the way healthcare costs, among other expenses that affect seniors disproportionately, are increasing, those percentages may not cut it -- especially considering that nearly half of senior households wind up spending more money, not less, in retirement.

Therefore, to be on the safe side, it's best to assume that you'll need to replace 100% of your previous income to cover your bills as a senior, and that you'll need to do so for roughly 22.5 years. The average American's household income is $74,000. Meanwhile, the average Social Security recipient collects about $16,320 in benefits each year. If we take that $74,000 figure and subtract $16,320, we arrive at $57,680 -- that's the amount of income the average American will need to withdraw from their savings each year to replace their pre-retirement income. Multiply that by 22.5 years, and we can see that the average American who is near retirement should have about $1.3 million in savings.

Now, before you start shaking your head in disbelief or, worse yet, throwing your hands up in defeat, let's talk about that number for a minute. We just learned that the average household income in the country is $74,000, and in many cases, that comes from two working spouses. A dual-income household could double that average of $16,320 a year in Social Security benefits to $32,640. When we subtract $32,640 from $74,000, we arrive at $41,360, which, when multiplied by 22.5, gives us a total savings target of just $930,600. That's still a lot of money, but it's considerably less than $1.3 million.

Furthermore, these numbers are operating under the relatively conservative assumption that you'll actually need to replace 100% of your previous income. But if your health is great and your home is completely paid off by the time retirement starts, you can probably get away with saving less. The same holds true if you're planning to work in retirement. While the average American can use the above numbers as a guideline, there are various factors that will ultimately influence how much you'll need to save, so realize that these figures do come with a fair amount of leeway.

At this point, I can guess what you're thinking: "There's no way I'll ever manage to amass $930,600 or more in my lifetime." But the truth is, if you start saving early on and invest your money wisely, you stand to accumulate a larger nest egg than you'd think.

In fact, the average American should be saving at least 10% of their salary for retirement, and 15% is far better. For a $74,000-a-year salary, that means setting aside $11,100 annually, or $925 a month. And guess what? If you save $925 a month for 30 years, and your investments generate an average return of 8% per year (which is below the stock market's average), you'll have $1.26 million on hand for retirement, which gets us darn close to that $1.3 million we talked about above.

Of course, if you wait too long to contribute to your retirement savings, you'll wind up with a very different number. Saving $925 a month for just 20 years, for example, will leave you with $508,000 for retirement, assuming that same 8% average annual return.

On the other hand, you may be able to make up for lost time somewhat by reaching to save more. Say you're aged 45 and planning to retire at 65. If you max out your 401(k) contributions until the end of your career and earn that same 8% return, then you'll wind up with more than $1 million to your name. You'd have to save $18,000 annually for five years and then $24,000 annually for 15 years (workers aged 50 and older can contribute more), but if you could swing it, it would pay off handsomely.

No matter how much you can spare for retirement savings each year, you owe it to your future self to save as much as possible, starting now.

When we talk about what the average American should be saving for retirement, we're dealing with a number of assumptions about income replacement needs and Social Security (not to mention retirement length). The above numbers should therefore serve more as a guideline than an absolute target.

Remember, if you're used to getting by on $54,000 a year, not $74,000, then you won't need to save nearly as much for retirement. On the other hand, if your earnings level far exceeds that $74,000 estimate, you'll need considerably more to maintain your lifestyle. Finally, regardless of how much you earn, if you love your job and plan to do it well into your 70s, you may not be looking at a 22.5-year retirement, which means you could get away with saving differently. The key is to look at what the average American might need for the future and then adapt that number to suit your circumstances, whatever they happen to be.