When we read about the state of Americans' finances, it's often nothing but bad news. In fact, as of late last year, an estimated 69% of U.S. adults had less than $1,000 in the bank, while 34% had no money set aside for emergencies at all. And let's not even get into the fact that one-third of Americans have no retirement savings, either.

But despite all the doom and gloom surrounding Americans' money habits, there's a silver lining to be proud of, and it's all thanks to today's youth. TD Ameritrade's 2017 survey on teens and money reveals that despite the public's blundering tendencies, teenagers have a surprisingly good handle on all things finance-related. Here are a few encouraging points of data that the rest of us could stand to learn from. 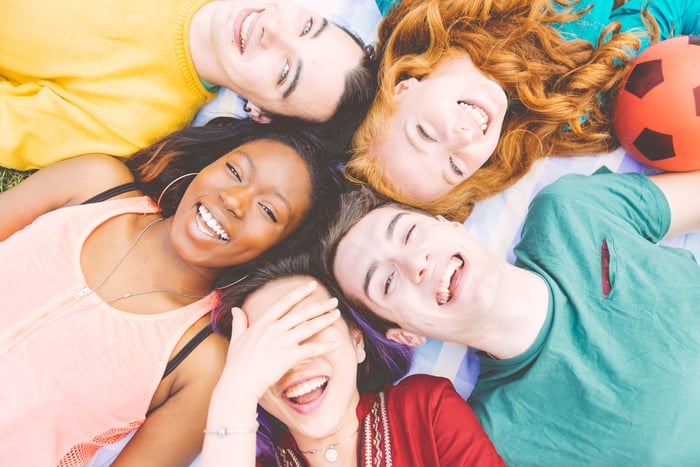 1. Half of teenagers work outside the home each month

Forget about coming home from school and spending hours in front of the TV. These days, teenagers are getting proactive about earning money by working evenings, weekends, and during the summer.

Given that teenagers -- or at least those still in high school -- typically have little to no expenses to cover on their own, that kind of cash offers an excellent opportunity to build some savings or set aside money for other purposes. Furthermore, since teens don't tend to command particularly high wages, it means that many are working a respectable number of hours while managing their school-related responsibilities.

3. An estimated 58% of teenagers plan to work part-time during college

College costs have gotten so out of hand that even families earning more than $100,000 per year are struggling to keep up. The fact that so many teens are aiming to work during college shows that they have a clear understanding of the expenses they'll face and that they're taking steps to avoid dangerous loads of student debt.

4. More than half of teenagers already have savings to show for it

You'd think that today's working teens would be taking that money and blowing it on the latest gadgets or fads. But not so -- more than 50% of those with jobs are already putting at least some of that money away. That's more than 34% of the adult population can say.

5. Teenagers are saving an average of $290 per month

Again, that's more than what many adults manage to bank. A teen who saves $290 a month consistently for four years of high school will have roughly $14,000 on hand once college rolls around. And that can go a long way toward tuition costs.

Sticking to a budget at a young age can set the stage for a more financially stable adult lifestyle, so it's encouraging to see that more than 40% of teens actually map out their spending. What's sad, however, is that only a similar percentage of U.S. adults can say the same, which means that nearly 60% of Americans aren't tracking their finances.

7. Teenagers are saving to pay for college more so than anything else

You'd think teenagers would be saving to go on vacation or follow their favorite bands on tour. But among teens who are socking money away each month, the single greatest goal in saving that cash is to pay for higher education. In fact, 41% of teens say they're saving for the purpose of paying for college. Meanwhile, 30% are saving to buy a vehicle, while a surprising 8% are already setting money aside for retirement.

Though you'd think the opposite would be true, today's teenagers seem to know a lot about saving money and planning responsibly for the future. If you're among the countless adults who have yet to prioritize short-term or retirement savings, you may want to pay attention to what the young adults in your life are doing with their finances. They just might teach you a thing or two.