Please ensure Javascript is enabled for purposes of website accessibility
Log In Help Join The Motley Fool
Free Article Join Over 1 Million Premium Members And Get More In-Depth Stock Guidance and Research
By Maurie Backman - Jul 31, 2017 at 7:01AM

Hint: It's hardly a number to write home about.

It's no secret that countless Americans rely on Social Security to stay afloat financially in retirement. But an alarming number of workers are placing way too much emphasis on those benefits and aren't saving on their own.

And that's a major problem. The average American currently collects just $1,360 a month, or $16,320 a year, in Social Security benefits. And while that can serve as a nice supplement to another source of income, if that's the only money you're looking at in retirement, you may be in for a rocky ride. 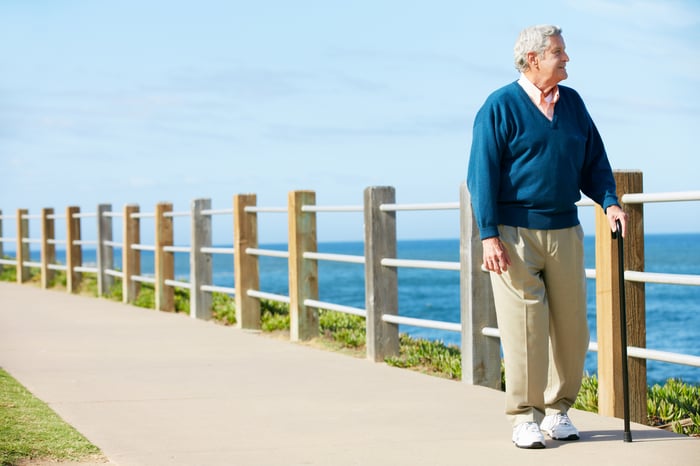 Though Social Security was never meant to sustain retirees in the absence of other income, a frightening number of workers may wind up in a situation where they're forced to live off a mere $16,320 a year, or however much they're able to get out of Social Security. According to the Economic Policy Institute, more than 40% of households aged 55-64 have no retirement savings to show for. And those who fall on the latter end of that spectrum unfortunately don't have too much opportunity to make up for lost time.

Of course, there are ways to generate retirement income outside of savings and Social Security. You can work part-time, start a business, rent out a portion of your home, or sell things you're no longer using, like furniture or even an unneeded vehicle. But many seniors don't have the ability or desire to work during retirement, and becoming a landlord isn't for everyone. That's why a much better option is to save independently during your working years, even if you don't have too many of those left.

How much can you accumulate in time for retirement?

Though near-retirees have fewer options for building a sizable nest egg, if you're relatively young and still have a few decades of work ahead of you, you have a real opportunity to amass some savings -- even if you're only able to part with a few hundred dollars a month. The following table shows how much of a nest egg you might come away with, depending on when you first begin saving:

As you can see, if you start saving $200 a month as early as age 25, you'll come away with a cool $622,000 if your investments bring in an average yearly 8% return, which is just below the stock market's average. Over a 25-year retirement, that's $24,880 a year, assuming that money generates no additional growth during that time. Add that to the $16,320 the average worker collects from Social Security today, and you're looking at $41,200 a year in income, which is a far more reasonable number to work with.

If you're behind on retirement savings, or have yet to begin setting money aside at all, and you only have a few working years left, there are some things you can do to avoid a scenario where you're forced to live off just $16,320 a year. First, start maxing out your 401(k) if you have the option to do so. Workers 50 and older can put up to $24,000 into a 401(k) per year, and if you do that for three years, you'll have $72,000, assuming your savings don't generate any growth. Better yet, if you have the option to contribute to a 401(k) and are able to max out, consider postponing retirement and working a few extra years to boost your savings while you can.

Now if you don't have access to a 401(k), which is the case for many workers, your next best bet is to max out an IRA at $6,500 a year (the current annual limit for workers 50 and over), for as many years as you can. If you're able to save above that threshold, you can put the rest of your money into an annuity or even a non-tax-advantaged brokerage account.

Of course, some people don't have the ability to max out an IRA or a 401(k). But no matter how much money you're able to put aside for retirement, or how old you are when you first start doing it, the key is to save something if you're worried about the prospect of living on just $16,320 a year. Social Security alone won't offer you the financially secure retirement you deserve. In fact, it won't even come close. And the sooner more workers accept that, the better positioned we'll all be to salvage our futures.