Even though today's older workers are eligible to retire and collect Social Security in full at either age 66 or 67, a growing number of employees are pushing themselves to work well into their 70s. But while it's one thing to extend your career a bit longer, it's another thing to plan on working indefinitely -- yet that's where a growing number of Americans are.

According to the latest U.S. jobs report, nearly 19% of adults 65 and over were working at least part-time during the second quarter of 2017. In fact, 32% of Americans aged 65 to 69 were employed in some capacity. But what's more telling is that last quarter, 19% of 70- to 74-year-olds were also working. As a point of comparison, back in 1994, only 11% of folks in their early to mid-70s were still employed. 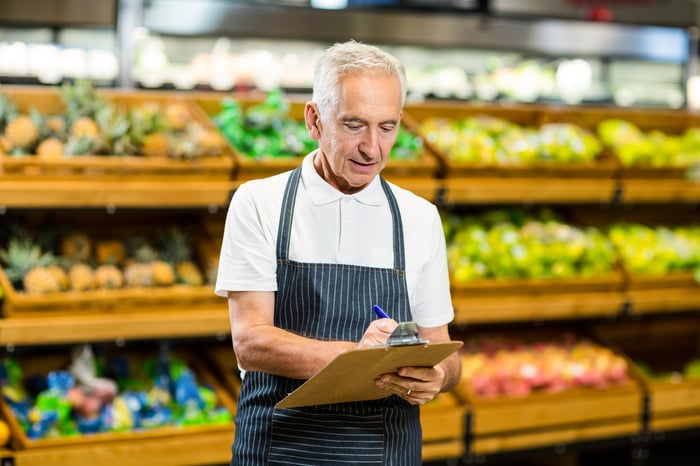 This data is consistent with a study released last year by Bankrate, which found that 70% of Americans plan to work as long as they can. And while those surveyed had different reasons for sharing this sentiment, it's clear that working in retirement may soon grow to become more so the norm than the exception.

Why are so many seniors still working?

Let's be clear: Working during retirement certainly has its benefits. For one thing, it's a guaranteed means of generating added income, which many seniors inevitably wind up needing. Working in retirement can also help keep seniors mentally and physically active, which can help ward off depression and serve as a crucial means of entertainment, albeit not in the classic sense. Still, not everyone who ends up working in retirement wants to be in that position, and it's those folks who risk winding up unhappy.

So why do so many retirees push themselves to keep plugging away? Much of the time, it's because they need the money. According to a 2015 report by the U.S. Government Accountability Office, nearly 50% of seniors 55 and over have absolutely no retirement savings to show for. And since the average American can't get by on Social Security benefits alone, a large chunk of seniors will inevitably need to work during retirement in order to stay afloat financially.

That said, not everyone who works during retirement does so for the money alone. For many seniors, retirement offers an opportunity to explore business ventures that weren't feasible when they were younger. Data from the Kauffman Index of Entrepreneurship tells us that 55- to 64-year-olds made up 24% of new entrepreneurs last year. And according to the U.S. Bureau of Labor Statistics, seniors 65 and older are more likely to be self-employed than any other age group.

Of course, not everyone has the means, or desire, to venture out independently, which means that a large chunk of retirees who work continue to answer to a boss, follow a schedule, and endure many of the challenges younger workers are forced to face. The only difference, of course, is that they're doing so with perhaps a touch less energy and patience.

Because money tends to be a strong motivator among those who work during retirement, it stands to reason that the more you save when you're younger, the more flexibility you'll have to leave the workforce permanently when you're older. So if the idea of working during retirement sounds unappealing to you, now's the time to ramp up your savings game. Currently, workers under 50 can put up to $18,000 a year into a 401(k), and $5,500 a year into an IRA. If you're 50 or older, these limits increase to $24,000 and $6,500, respectively.

Of course, not everyone can max out these limits, but if you save smaller amounts consistently for a number of decades, you stand to come away with some pretty impressive results. Imagine you're able to set aside $300 a month starting at age 30, with the goal of retiring at 67. If you invest that money and bring in an average annual 7% return, which is actually a few points below the stock market's average, by the time retirement rolls around, you'll be sitting on $577,000. And that, combined with your Social Security benefits, could very well be enough to live on without having to work as a senior.

If you're much older and behind on savings, another option is to extend your career a couple of years and max out your 401(k) for as long as you can. Saving $24,000 a year, or $2,000 a month, for five years will give you an additional $120,000 to work with in retirement, and that assumes zero investment growth during that time. While that sort of cushion may not help you avoid working entirely as a senior, it might, for example, spell the difference between working one day a week versus several days, or, worse yet, almost full-time.

Though working in retirement has its benefits, it's not what everyone wants. The sooner you prioritize your retirement savings, the less likely you'll be to join the ranks of seniors who remain employed, whether they like it or not.

Will You End Up Working During Retirement? Chances Are, Yes. @themotleyfool #stocks Next Article
Current