It's natural for lower earners to worry about money on a consistent basis. But apparently, a large number of middle-income Americans -- many of whom aren't doing poorly for themselves, at least at face value -- are extremely anxious about their finances as well.

In a newly released MassMutual study, 48% of Americans aged 25 to 65 with an annual household income of $35,000 to $150,000 said they worry about money at least once a week. All told, more than one-third of middle earners identified as feeling "not very" or "not at all" financially secure, including those at the top end of that range. 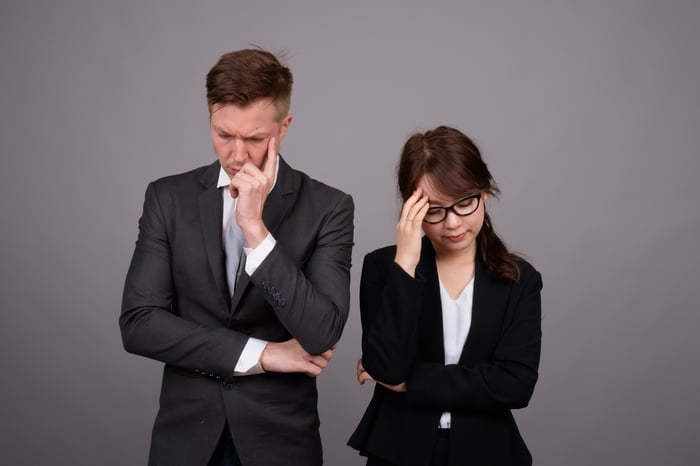 So what are middle earners so worried about? Being unprepared for retirement made the list, as did healthcare costs and overspending in the near term. Their top financial fears, however, center around financial emergencies, such as encountering a major unplanned expense or falling ill and being unable to work.

Of course, these fears certainly aren't unfounded. The vast majority of Americans have less than $1,000 in the bank, which means they're ill-equipped to cover a long-term period of unemployment or costly unanticipated expense. Throw in the fact that one-third of the U.S. population has yet to start saving for retirement, and it's no wonder even middle earners have their share of worries.

Here's the good news though: If you're stressed about money but are bringing home a decent salary, you can take steps to improve your financial picture and eliminate some of that fear. You just need to be willing to make an effort.

Whether you're behind on retirement savings or are in serious need of a well-stocked emergency fund, if you're earning what we'll call a respectable salary, then you have a real opportunity to overcome these obstacles and lower your stress load in the process. Let's start with near-term savings. Having three to six months' worth of living expenses in the bank will protect you from immediate unforeseen circumstances, whether it's a layoff at work or a car engine that suddenly goes kaput. Of course, that amount of money isn't going to magically appear in your savings account overnight, but if you work on building that safety net slowly, you will get there eventually.

Similarly, if you work on ramping up your retirement plan contributions over time, you'll manager to turn a series of relatively small deposits into a rather sizable sum. For example, putting just $300 aside each month over 35 years will leave you with nearly $500,000 if your investments generate an average annual 7% return, which is more than doable with a stock-heavy portfolio. And given that you're supposed to be saving at least 10% of your income for the future, if you're working with a salary of $35,000 or higher, that $3,600 a year isn't unreasonable.

Easy ways to save

Now if you're struggling to come up with extra money to fund your emergency account or 401(k), here are a few options to consider. First, take a look at your current spending and identify a few smaller expenses to eliminate. It might mean shaving $100 a month off your budget by packing your own lunches, and another $100 a month by hosting movie nights in your apartment instead of going out every single weekend, but if you make an effort, over time, you'll get there. On the other hand, if you'd rather not forgo life's small luxuries, you can make one larger change, like unloading a vehicle in favor of public transportation or downsizing your living space to lower your rent.

Don't want to give anything up? Then consider working a side gig. Bankrate reports that of the 44 million Americans who currently have some sort of side hustle, 36% manage to bring in an extra $500 a month or more as a result. If your typical living expenses equal $4,000 a month, and you're hoping to establish a $12,000 emergency fund, working a side job for two years could put you right at that goal without having to sacrifice the comforts you've come to enjoy. Similarly, that money can be used to boost your nest egg and help take some of the pressure off later on in life.

If your shaky finances are causing you stress, there's no sense in sitting back and letting money-related anxiety take over your life. You're better off addressing whatever shortcomings are keeping you up at night, even if it means making a few sacrifices along the way.