We all work hard for our money, so the last thing we want to do is throw any of it away. Yet a surprising number of us are kissing countless dollars goodbye due to ignorance or poor spending habits. Here are a few common sources of wasted money many of us inevitably fall victim to.

Countless Americans are drawn to the gym, particularly around the new year. But that resolution to finally trim down or bulk up might not only mess with your brain, but also your wallet. While gym prices can vary depending on the type of facility you join, there's a good chance you'll end up throwing your money away on that membership. Gyms, after all, only anticipate that 18% of members will actually use them consistently, so if you're paying $50 a month for a gym that you use a handful of times a year, at best, you're essentially wasting $600 a year. 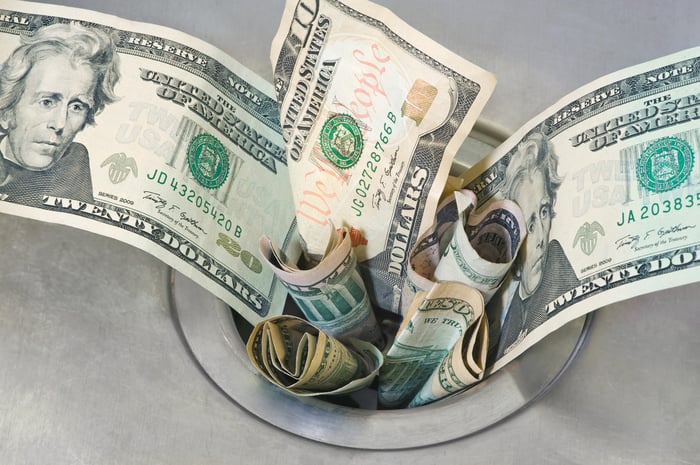 Before you sign up for a gym membership, think about how often you'll actually use it and whether there's a low-cost (or better yet, free) alternative. If you own a bike, for example, riding it to work will serve as a form of exercise and, as an added bonus, save you some money on your commute. And if you're already paying a monthly fee to a gym you're rarely utilizing and you're not locked into a contract, cancel that membership, or inquire about purchasing daily passes at a fraction of your monthly cost. This way, you'll only pay for the services you're actually using.

Whether it's excess produce from the local market or that bulk jar of cashews you were convinced you'd consume before its expiration date, wasting food has become such a common occurrence that many folks don't realize the extent to which they're doing it. It may therefore surprise you to learn that the average U.S. household throws out $640 of food each year, according to the American Chemistry Council.

If you'd rather not toss all that food and money down the drain, make a point of creating weekly grocery lists before you hit the supermarket, and do a regular fridge, freezer, and pantry inventory to see what you already have lying around. Also, be careful when buying in bulk. Even shelf-stable items don't last forever, so limit those mass quantities to items you know you consistently use.

It's one thing to enjoy the occasional meal out, but if you're not careful, eating at restaurants too often could result in a serious waste of money. In 2015, the average American household spent a total of $3,008 dollars on food away from home, or so reports the Bureau of Labor Statistics. But since food establishments typically charge a 300% markup on the items they serve, for every $3,000 you spend, you're paying $2,000 extra compared to what those same meals would cost you to make at home.

If you're currently throwing away loads of money on restaurants and takeout, consider scaling back, especially if you're struggling to save, or have other pressing financial goals to meet. You don't need to go cold turkey, but if you cut your three typical restaurant meals a week down to two, you'll avoid wasting hundreds, if not thousands, of dollars.

If you're saving for retirement in an IRA or 401(k), you're doing a smart thing for your future. But there's a drawback to these plans -- particularly the latter -- and it's the fees that come along with them. In fact, a whopping 92% of Americans don't even know how much money they're losing each year to 401(k) fees, according to a recent NerdWallet study.

What many savers may not realize is that not all investments are created equal, and some are costlier than others. But if you're not careful, you could end up losing thousands of dollars in your lifetime to fees alone. Believe it or not, the average American worker who begins earning a median salary at age 25 will lose a total of $138,336 to 401(k) fees alone. To avoid falling victim to that same trap, pay attention to your investments and opt for lower-cost options, like exchange-traded funds (ETFs), as opposed to actively managed mutual funds.

Just as it's essential to limit your investment fees, so, too, is it critical to put your money into vehicles that are likely to generate growth. It's estimated that 60% of Americans wind up investing too conservatively for retirement and, as such, lose out on sizable gains.

Imagine you're able to set aside $300 a month for retirement starting at age 25, with the goal of retiring 40 years later. Here's what your total might look like based on the investment strategy you adopt:

In the above scenario, limiting yourself to safer, low-yield investments could cause your nest egg to fall up to $715,000 short. Yikes!

On the other hand, if you're willing to sink the bulk of your portfolio into stocks, which is a reasonable risk to take on if you start saving in your 20s, you stand a good chance of bringing in an average yearly 8% return, which is just below the market's average. And that could work wonders for your nest egg, as the above table highlights.

Nobody wants to lose money for no good reason. Be aware of these cash-zapping traps, and steer clear of them at all costs. Your finances depend on it.