After years of overspending at my local warehouse club, I finally developed a bulk-buying strategy to share with the world. You can thank me later.

Getting a warehouse club membership was an eye-opening experience for me. But it took several years of trial and error to strike that perfect balance of buying in bulk without wasting money.

If you're among the countless Americans who take bulk buying to a financially damaging extreme, you're not alone. Last year, I reported that the average American wastes $640 per year on uneaten food. Given that 69% of U.S. adults have less than $1,000 in the bank, that's a lot of money to throw out. And while we all have different reasons for tossing away so much food, the lure of bulk buying no doubt contributes to this unfortunate phenomenon. 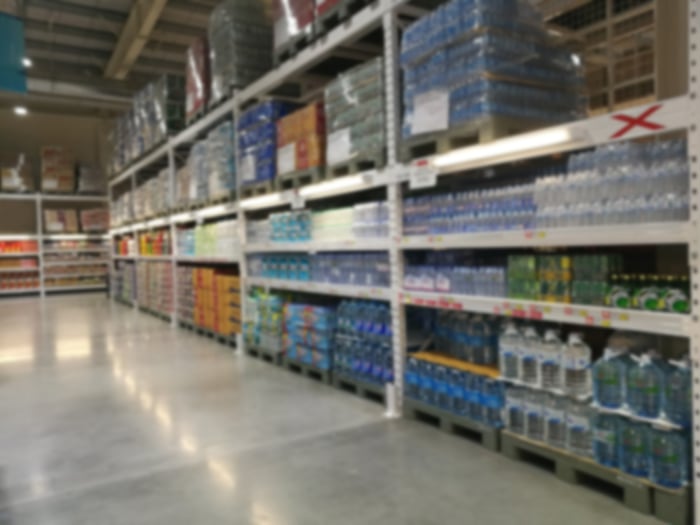 Giving in to temptation

We probably all know someone with a tendency to stockpile food, but you don't need to have hoarder-style propensities to fall into the trap of overbuying. All you need to do is have a strong desire to save money on groceries, even if it means taking things to a bit of an extreme.

That's what happened when I first starting shopping at a warehouse club. I couldn't believe all the deals I'd previously been missing out on -- canned tuna for $0.79 a pop, and gallon-sized mayonnaise containers for just pennies more than what a tiny jar cost at the local supermarket. Never mind the fact that I happened to loathe both tuna and mayo (still do) -- these were deals I had to snatch up.

Now, to my credit, I rarely spent money on things I actually hated, but what I did frequently do was load up on products I only ate on occasion -- a major mistake. Take pickles, for example. Who doesn't like pickles? But it turns out, I didn't really need to be buying 107 of them at once. The same wound up holding true for canned beans, cottage cheese, and a frosted sugary cereal that shall remain nameless -- items that to this day I typically only eat once a week, at most.

Here's another mistake I often made back when I first got my membership: I'd buy items that I actually ate quite regularly without checking to see if they were on sale, in smaller quantities, at my local supermarket. I can't tell you how many times I came home with a two-pint box of blueberries at the more-than-reasonable $5 price point, only to later find that my supermarket was offering them for $2.50 a pint, which would've more than served my needs for the week.

All told, over a two- to three-year period, I easily wasted more than $500 on bulk items I never should've purchased to begin with, for various reasons. The good news, however, is that I've since learned from my errors and have taken steps to only buy in bulk responsibly.

How to pull off bulk buying

Let's be clear: Buying in bulk can help you save money, if you're smart about it. First, there are certain products that are known to come cheap at warehouse clubs. According to the U.S. Department of Agriculture, you'll typically save up to 12% on meat, 11% on dairy and produce, and 6% on grains by purchasing these items at warehouse stores. If these are items you tend to eat regularly, and you have the capacity to either use up said items by their respective expiration dates or store them adequately, then you might save some money by buying them in bulk. But in many cases, you won't actually snag a better deal at the warehouse club than you will by waiting for a traditional supermarket sale.

With that in mind, I established some rules for buying in bulk that have served me well -- and saved me money -- in recent years. Before I purchase anything in mass quantity, I ask myself the following:

Unless I can give a resounding "yes" to each of these questions, I leave the item on the shelf and move on. It's that simple.

Not only has following this set of rules helped me avoid wasting money, but it's also prevented me from exceeding my monthly budget. And that's another problem with buying in bulk -- if you spend, say, $100 more than necessary because you've hauled out to your warehouse club and don't want the trip to have gone to waste, you risk exceeding your budget by that amount and having to charge something, whether it's those groceries or another bill, on a credit card. Then, if you can't pay that bill by the time it comes due, you'll accrue interest charges that will only fuel the cycle of throwing out money.

Tempting as it may be to buy in bulk, in many cases, you're better off sticking to a traditional supermarket and restocking your fridge and pantry as needed. Otherwise, you may wind up forcing a sickening amount of ice cream down your throat in a single sitting, all in a desperate attempt to reclaim some freezer space and avoid throwing said ice cream away. True story.