Moving forces you to sort through everything you own, and that creates an opportunity to prune your belongings. It's not always easy to decide what you'll bring along to your new home and what is destined for the curb. Sometimes we're nostalgic about items that have no practical use, and sometimes we're overly optimistic about clothing that no longer fits or sports gear we tell ourselves we'll start using again after the move.

Despite any pain it may cause you, it's important to get rid of anything you truly don't need. Not only will it help you avoid clutter, but it can actually make it easier and cheaper to move. 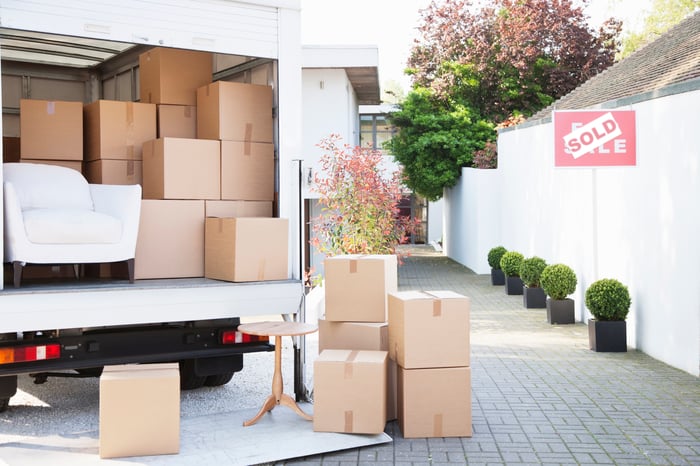 Moving lets you decide which items should stay and which should go. Image source: Getty Images.

In about 20 years of living together, my wife and I have moved eight times. For the first seven moves, our houses or condos got progressively bigger. That allowed us to accumulate more clutter than we needed, and by our eighth move we had a basement storage area that housed six VCRs, at least a dozen board games we had rarely played, and a guitar and a pair of amplifiers that I had not touched in the entire time we had lived together.

We had carted all this stuff around because our ever-increasing space allowed us to. For our final move, however, we were downsizing from about 2,300 square feet of finished space, with storage and a two-car garage, to 1,300 square feet with neither storage nor a garage. And we were doing it by U-Haul.

As we packed up our belongings, we were constrained by the space limitations of both our new condo and the 20-foot rental truck. We needed to unload some stuff, which made for some tough choices.

How did we decide?

Having room for something and needing it are two entirely different things. For our move from Connecticut to Florida, my wife and I laid down some ground rules:

After the initial round of purging (and donating), we made two lists. One was stuff we definitely wanted -- things like our remaining clothing and the furniture we needed for our new home. The second, which included things like a kitchen table we only sort-of liked, went on an "if it fits" list. Because we had one U-Haul and two small cars to fill, some of this stuff would simply not make the cut.

Moving forced us to part with a lot of items we wanted but did not need. I even gave a large television to a friend who helped us move, because in the end, it simply did not fit. Once we arrived in our new home, aside from replacing the TV and buying a kitchen table, we actually found that we missed very little of what we had given up (especially not the forgotten ice-cream maker or the bread maker that never left the box it was delivered in). Even on the rare occasion when we had to buy something we had previously given away, sold, or donated, we weren't overly upset, because we knew we had nothing more than what we needed.

Packing too much stuff is one of the biggest moving mistakes you can make. Save yourself some time, money, and sanity by decluttering as much as possible before you move.