When you move a short distance, mistakes can easily be corrected. If you run out of space in a moving truck or forget to pack something, it's generally not a big deal, because you can simply drive it over later.

Long-distance moves, though, bring a whole new set of problems. Generally you get one shot, and poor planning can leave you with no choice but to pay more money or leave something you care about behind. 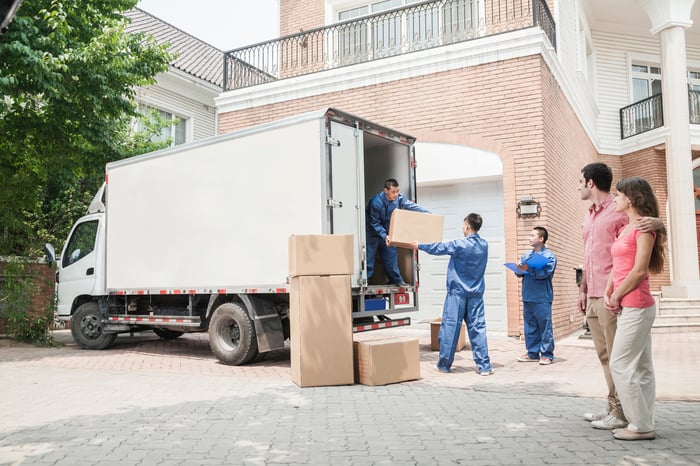 Your first inclination may be to hire movers to handle the move. For a long-distance move, that will probably not be a cost-effective choice. Before hiring anyone, you should consider having your stuff shipped or renting a truck and driving it yourself. If you pick either of those options, the major truck rental companies offer moving help on an hour-by-hour basis at fees that vary by market.

A year ago my wife and I moved from Connecticut to Florida with a fairly narrow window of time. We priced movers and shipping services, but we found that loading up a truck and driving it ourselves was the cheapest option by a dramatic amount. It wasn't fun (and not everyone has the experience to drive a 20-foot truck on a 20-hour trip), but with our house sold and my wife having to start work near our new home, it was the cheapest, most logical option.

Sometimes people move items that would be cheaper to replace when they arrive at their new home. For example, it's difficult to move light bulbs. You have to carefully wrap them and find a safe place in your moving vehicle. In most cases, the time and trouble you save will far outweigh the cost of new light bulbs.

When we packed for that move, we had one 20-foot truck and two small cars to fit all our stuff in, and that was it. Because of that (and the fact that we were moving to a much smaller space), we greatly cut down on our belongings. Once the truck and our cars were filled with necessities, we did the math on everything else.

Was it cheaper to ship it or replace it? In nearly every case, the answer was "replace it."

Whether you hire movers, use a shipping service, or do it yourself, the more you bring, the more you will spend. Because of that, you will want to avoid packing a lot of things that have no practical use and limited sentimental value. In other words, it's fine to bring a few precious keepsakes, but it may be time to part with your stuffed animal collection.

Rely on yourself (and your friends) as much as possible

When we moved, I hired two hours' worth of moving help on each end of the trip. That cost me roughly $200 in Connecticut and $150 in Florida. On the loading end, I made sure everything was ready to go before the movers arrived. That meant carefully packaging anything fragile and having a friend come over to move things up from the basement. I had also rented moving blankets, and I kept tape and bungee cords on hand in case we needed them.

Labor is costly, so even if you hire movers for the full move, you can typically save money by preparing everything in advance. You should also keep some moving supplies handy -- the up-charge on a roll of tape or bubble wrap can be astounding.

Don't forget that it's just stuff

No matter how careful you and your movers are, something will generally break. The odds of that increase as the move gets longer, because even a carefully packed truck can jostle your belongings.

We've lost some lamps and a TV or two over the years, and some furniture has picked up some nicks. My mother lost a semi-treasured stuffed animal and a few other items during her single three-mile move after roughly 40 years in the same house.

When you move, unexpected things will happen. Keep especially precious items close to you or take extra care if they must be shipped or packed into a moving truck. Be as careful as you can, but in the end remember that possessions are replaceable (and perhaps covered by insurance if you bought it).