Spoiler: It's not enough.

By the time you reach your 40s, there's a good chance you'll have had about 20 years of working experience under your belt. And that means you should, ideally, be in a decent place as far as your retirement savings go. Unfortunately, a large number of American 40-somethings  are already behind on building their nest eggs. They need to start catching up immediately.

Among U.S. households headed by someone aged 44 to 49, the average retirement savings balance is $81,347, according to the Economic Policy Institute. But while that number may not seem all that bad, it's also a bit misleading. A small number of of wealthier people who are financially able to set aside very large amounts can easily pull an average up. And in fact, they do. If we take a look at the median retirement savings balance -- signifying that half of these households have more saved, and half have less -- it's just $6,200. And what this tells us is that there are far more 40-something families whose nest eggs are below the average than above it. 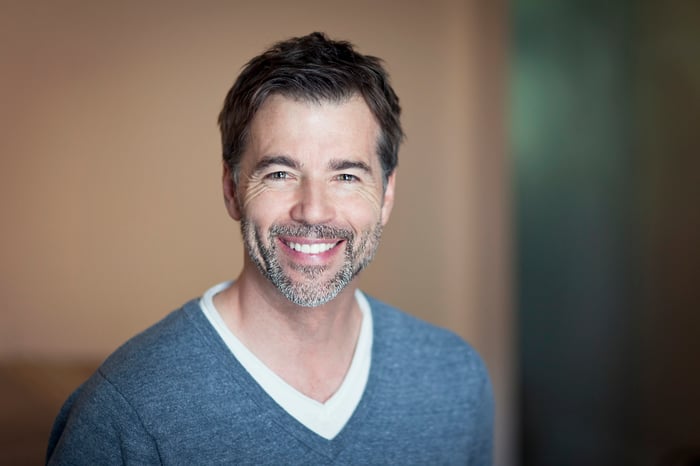 But even if you're between the ages of 44 and 49 and have managed to amass $81,000 or so, you still have some catching up to do. According to Fidelity, by the time you reach your mid-40s, your retirement savings balance should be equal to four times your salary. Since the average salary for American workers in their mid-40s is somewhere around the $50,000 range, to have accumulated just $81,347 at this point means you're not where you need to be. And if you're among the countless  Americans who have yet to set aside a single dime for retirement, let this serve as a wake-up call.

One big reason so many workers of all ages don't save is because their expenses monopolize their paychecks. There's just no money left over to set aside for the future. But for others, that lack of savings boils down to the fact that when the time comes, they expect to rely on Social Security benefits.

The problem is that Social Security isn't designed to sustain the average American on its own. The typical recipient today gets just $1,360 a month, or $16,320 a year, in benefits -- not really enough for a comfortable lifestyle. Add in the fact that healthcare alone will cost the average healthy 65-year-old today $200,000 or more in retirement, and it becomes crystal clear you're going to need other sources of retirement income.

If you're in your 40s and behind on savings, the good news is that you're in a much better position than someone in his 50s or 60s in the same predicament. That's because you probably have another 20 years or so in the workforce, giving you a pretty good window during which to grow your nest egg.

The following table gives you a rough idea of how much you could wind up with, depending on how much you start investing now:

As you can see, if you're able to set aside a decent chunk of cash each month, and your investments generate an average yearly 7% return (which is a few points below the stock market's average), you can salvage your nest egg. Furthermore, the above figures assume a 20-year savings window. But if you're 45 today, and are willing and able to work until 70, you'll be sitting on $379,000 if you steadily contribute $500 a month over the next 25 years. Make it $1,000 a month, and you'll have a rather impressive $759,000 to retire with.

Obviously, saving money takes discipline, but if you're willing to start cutting your expenses, you have a real opportunity to build a little wealth in time for retirement. Or, to put it another way, you need to start cutting expenses and building that wealth, because if you don't, you risk running out of money as a senior. It's that simple.

Now, if there's really not much wiggle room in your budget (say, you're already living frugally and have a bunch of inflexible expenses), you should consider getting a side job. Of the 44 million Americans who currently work a second gig, more than one-third bring home an extra $500 a month or more. Stick that kind of cash in your 401(k) consistently, and you'll be in pretty good shape once retirement kicks in, even if your account balance is zero today.

While it's encouraging to see that the average 40-something American is saving for retirement, most of us need to get a lot more committed to hitting some higher targets. Ramp up those contributions now, and you'll be happier when retirement eventually rolls around.