We all make mistakes in life, and that includes money-related decisions. If you're bemoaning a specific aspect of your finances, you can take comfort in knowing you're nowhere near alone. A good 71% of Americans have money management regrets, according to a just-released NerdWallet study.

Which aspects of our financial lives have we collectively mucked up the most? Here are some of the top mistakes we've made in the past:

Younger adults are most likely to have regrets along these lines. An estimated 83% of adults under 35 feel they've made mistakes, compared with 75% of Gen Xers and 59% of baby boomers. But there is some good news in all of this, and it's that the aforementioned errors are easy enough to correct. All it takes is a little effort and knowing where to start. 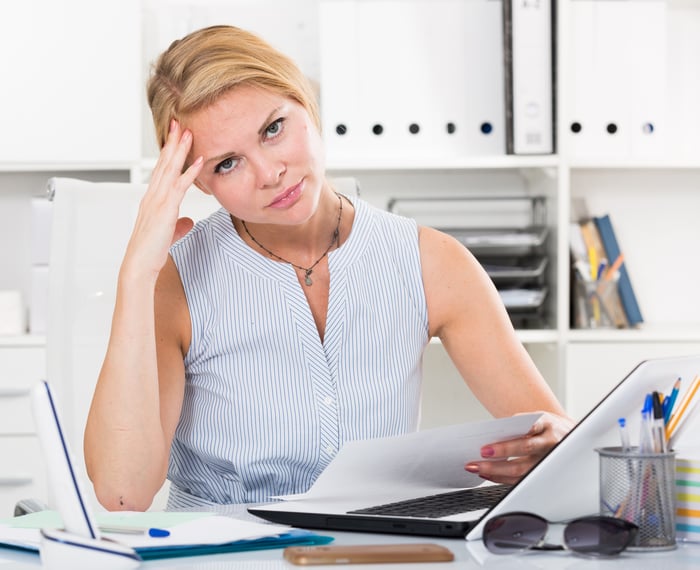 It's not a secret that Americans tend to be bad at saving money, and a big part of it stems from not having a plan in place. Nearly 45% of Americans 25 and older have no financial plan whatsoever, according to TD Ameritrade. But if you don't map out your goals in writing, you're less likely to achieve them.

Thinking about finances earlier in life is especially crucial to building a nest egg, because the sooner you start, the more opportunity you'll have to accumulate wealth. The following table highlights the importance of kick-starting your savings efforts when you're younger:

Ignoring your finances when you're younger could leave you short-changed come retirement, so if you've yet to formulate a plan, sit down -- either alone, with your spouse, or with a financial advisor -- and put one in writing. Then take steps to follow that plan so you wind up with a decent chunk of cash by the time retirement rolls around.

There's a reason marketing folks tend to be well paid -- many of them are annoyingly good at their jobs, so much so that they cause otherwise smart spenders to blow money on things they don't need. Such is the trap countless Americans fall into on a regular basis. In fact, almost 84% of Americans are guilty of making impulse purchases, with 20% burning through $1,000 or more on an unplanned buy.

If you've been known to spend money on things you don't require, or haven't planned for, you'll need to take a smarter approach to shopping. For one thing, don't shop during hyped-up sale periods unless it's absolutely necessary. You're more likely to stick to the basics if you don't have all of those flashy signs in your face designed to lead you astray. Furthermore, don't shop out of boredom. If you're settling in for some evening downtime, put your phone or tablet away and read a book. This way, you're less likely to stumble upon a "deal" that will only derail your savings efforts.

Credit cards make it easy to get in way over our heads, so if you've fallen victim to that trap before, here's a good way to avoid having it happen again: Stop using your credit cards. It's really that simple. If you can't trust yourself to use your credit cards responsibly, you're better off not using them at all. Instead, make lists of the things you need before you go shopping, and take only enough cash with you to pay for them.

If you are going to use a credit card -- say, to pay certain bills online -- be sure to check your balance every few days so you know where it stands. Many folks use their credit cards regularly during the month and don't see their balances until their bills arrive. But if you keep tabs on your spending and see your balance start to climb, it'll signal your brain to start spending more judiciously.

Not having a budget

It's surprising that most Americans don't follow a budget, given how easy it is. Your budget doesn't have to be anything fancy. Just map out your monthly expenses on a spreadsheet, compare what you spend to what you earn, and make sure there's enough room left over for savings, ideally equal to at least 15% of your income. If there isn't, then you'll have the option to review your various expense categories and see which are the easiest to slash.

Many people don't realize how much they typically spend until they see that data lined up in one neat package, so if you've yet to create a budget, make it your next weekend project to put one together. It could be an eye-opening experience, and one that sets you on a better financial path.

We all make mistakes in life, and that includes botching our finances from time to time. But rather than harp on your previous blunders, learn from them and move forward. With any luck, you'll soon be in a more positive place -- emotionally and financially.