Please ensure Javascript is enabled for purposes of website accessibility
Log In Help Join The Motley Fool
Free Article Join Over 1 Million Premium Members And Get More In-Depth Stock Guidance and Research
By Maurie Backman - Oct 29, 2017 at 11:04AM

Countless Americans bust their budgets on costumes, candy, and decor. Can you afford to be one of them?

You can't help associating October with certain things that make this time of the year special. From pumpkin lattes to changing leaves, there's nothing like experiencing the fall season in the heart of its glory. And there's perhaps no better culmination to those weeks of perfectly crisp weather than a holiday adored by adults and children alike: Halloween.

For many folks, Halloween is an excuse to load up on candy and adorn their front lawns with the silly decor their parents never let them buy when they were kids. It's also a holiday that collectively costs us a ridiculous amount of money. 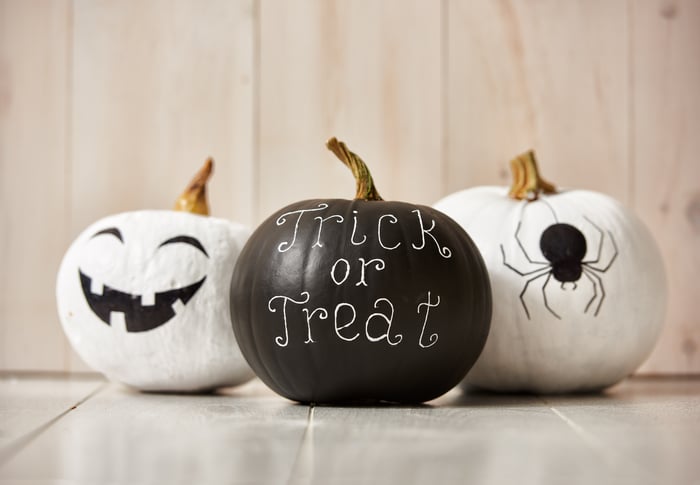 Last year, Halloween cost consumers a collective $8.4 billion. Of that, we spent:

When we divvy this total up among the general population, we see that the average American spends roughly $83 on Halloween. But many households spend well above that average. Families with multiple children, for example, might exceed that $83 threshold by virtue of costumes alone. And those who tend to turn their homes into virtual haunted houses might spend hundreds of dollars to give trick-or-treaters the thrilling, yet fleeting, spooky experience they crave.

Of course, there's nothing wrong with indulging in a little Halloween fun. But given the number of Americans who are currently struggling financially, it's an awful lot of money to spend on what's essentially a whole lot of hoopla.

Is Halloween wrecking your budget?

Maybe you're like the typical American and plunk down $83 on candy, costumes, and some modest decorations. But while $83 may not seem like such an indulgence, if you're already having difficulty keeping up with your bills, it's money you should probably be saving, not spending.

It's estimated that 57% of Americans have less than $1,000 in savings, while 39% have no savings whatsoever. If you're in either category, then spending $83 on Halloween is hardly a responsible move. Rather, that money, or at least some of it, needs to be in the bank to help protect you when a true emergency strikes.

Similarly, if you're deep in credit card debt, shaving $83 off your total could bring you one step closer to breaking free from that cycle. The average U.S. household owes a whopping $16,000 in credit card debt. If you're still carrying a balance, paying off a portion of it will save you money on interest in the long run.

Furthermore, if you're one of those people for whom Halloween costs considerably more than $83, let this serve as a friendly but firm wake-up call that you're probably spending more than you should be. Sure, it's nice to see the looks on kids' faces as they marvel at your decked-out lawn and haunted decor, but are those smiles really worth $300 when you have no savings and are staring at a pile of debt? Probably not.

Now, this isn't to say that you shouldn't spend any money on Halloween. Rather, be judicious. Buy some candy so you're not the only house on the block that isn't dispensing it, but skip the elaborate costumes in favor of something simple. Better yet, have your kids reuse last year's costumes if they still fit. And while you can go ahead and stick a carved-out pumpkin on your porch, don't go overboard on decorations. Halloween is no doubt a fun holiday to celebrate, but you can do so on the cheap. And that way, you get the best of both worlds -- loads of candy with a side of extra cash.