When we think about retirement, we often picture carefree seniors frequenting the theater and boarding cruise ships every other month. But the fact of the matter is, countless seniors end up struggling financially in retirement, and it's often due to the same few mistakes. Here are four major errors that could easily destroy your retirement if you're not careful.

Many people are led to believe that they don't need to save independently for retirement as long as they have their Social Security payments to fall back on. But it's this very line of thinking that gets so many seniors into trouble, because no matter your income level or lifestyle, you simply cannot live off Social Security alone. 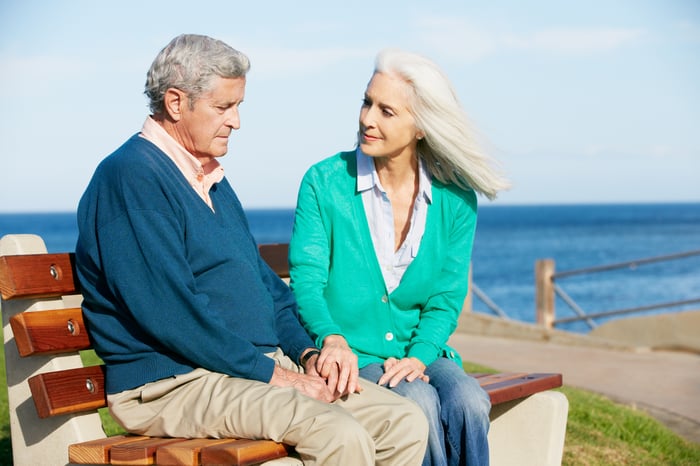 Social Security is only designed to replace about 40% of the typical worker's pre-retirement income. Most folks, though, need double that amount to pay the bills in retirement, and that assumes a relatively modest existence. Want to travel often, and enjoy your share of leisure activities? Then you can count on needing even more.

And in case you're not convinced, here are some numbers that might change your mind: The average Social Security recipient today collects roughly $16,320 a year. That's it. Even if both you and your spouse work, and are eligible for benefits, that's still just $32,640 a year out of Social Security if you're both average earners. Either way, those numbers won't make for a comfortable retirement at all.

Neglecting to save independently is a major mistake that could compromise your financial security in retirement. But missing out on years of investment gains is almost as bad. That's why if you're still relatively young, it pays to begin saving immediately, and not put it off for the future.

The following table shows how much you might accumulate if you were to start saving $300 a month at various ages:

As you can see, in this example, kick-starting your savings efforts at age 40 versus 35 will leave you with $145,000 less in retirement, and that's not a gap that's easy to recover from. The other thing to realize is that in this scenario, that $145,000 would have come at an out-of-pocket cost of just $18,000, assuming an 8% average yearly return on your investments (which is more than doable with a stock-heavy portfolio). Losing even a few early years of savings could set you back to the point where you can't recover, so if you've yet to fund your nest egg, start contributing right away.

3. Dipping into your retirement funds prematurely

The purpose of retirements accounts like IRAs and 401(k) is to provide income once you're no longer working. That's why it's a truly bad idea to dip into those accounts before you're actually retired -- even if you do come to need the money sooner.

First of all, if you access your money prior to age 59 1/2, you'll face a 10% early withdrawal penalty on the amount you remove (the exception being Roth accounts, which don't impose that fee). Furthermore, you'll lose out on not just the amount you withdraw prematurely, but potential earnings on that sum, too.

In the above example, we saw how an 8% average yearly return worked wonders for a $300 monthly contribution. Let's assume that's what your portfolio averages, and that you remove $15,000 when you're 45 to cover an unplanned expense. Not only will you lose $1,500 for accessing that money early, but assuming your plan is to retire at 65, you'll end up losing out on roughly $55,000 of investment growth. And that could make a major difference when you're on a fixed income later in life.

Many folks rush to dump their stocks as retirement nears in favor of safer investments. But while you should move some of your portfolio into bonds or less volatile alternatives when you're close to retirement, unloading your entire collection of stocks is a different story.

Because stocks have historically delivered a much higher return than bonds, retaining some in your portfolio can help ensure that your savings keep pace with inflation. Furthermore, if you hold dividend stocks as a senior, you'll get an added source of income that can help pay the bills. Even if you're the risk-averse type, aim to keep at least a third of your total investments in the stock market. Otherwise, you won't get the same benefit out of your portfolio when you're older.

Attaining financial security in retirement often boils down to making smart choices along the way. Avoid these mistakes, and you'll be better positioned for the comfortable retirement you've been working for.