Please ensure Javascript is enabled for purposes of website accessibility
Free Article Join Over 1 Million Premium Members And Get More In-Depth Stock Guidance and Research
By Maurie Backman - Nov 15, 2017 at 10:36AM

It's a truly frightening statistic.

Thanks to the Affordable Care Act, millions of Americans who were previously without insurance managed to obtain some form of coverage. Unfortunately, a large percentage of U.S. adults are still lacking insurancewise -- even though they're paying for plans.

The number of Americans classified as underinsured has more than doubled since 2003, according research by the Commonwealth Fund. Last year, 28% of adults aged 19 to 64 were underinsured. That's a good 41 million people for those keeping track. Not only is that a frightening number on its own, but it represents a steep climb over a mere 13-year stretch. And it's not a problem that's likely to resolve itself in the near future, either. 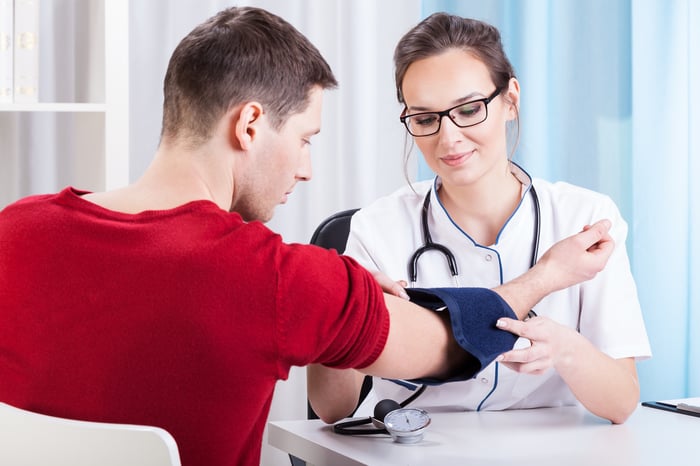 Though having some health coverage is worlds better than having none at all, those with inadequate coverage will continue to remain financially vulnerable. What does "inadequate" mean in this context? The Commonwealth Fund defines being underinsured as:

You'll notice that premium costs aren't factored in when determining adequacy in coverage, but to add insult to injury, most folks who buy insurance through the open marketplace are likely to see their premiums rise substantially going into 2018. As if things weren't bad enough already.

The dangers of being underinsured

Inadequate health coverage can hurt you in more ways than one. Part of the problem is that premiums and deductibles tend to have an inverse relationship. The less you pay for the privilege of having a health plan, the more you're likely to pay out of pocket before your health insurance company will even begin covering your services.

Let's also not forget that when it comes to health insurance, you tend to get what you pay for. A lower-cost plan might save you money as far as your premiums go, but if the medications you take aren't covered, or you're forced to pay for certain diagnostic tests or procedures your plan won't pick up, your bills could easily skyrocket. And if you don't have the income or savings to cover them -- which is the case for most Americans -- you'll risk going into serious debt.

Just how much debt are we talking about? In 2014, a good 40% of adults racked up debt to pay for medical treatment. Furthermore, medical debt is the No. 1 source of personal bankruptcy filings in the country.

But being underinsured won't just wreak havoc on your finances; it could also damage your health. If your coverage is poor, you might opt to skip seemingly minor tests or procedures in an effort to avoid the associated bills. But if you miss the chance to address a health issue before it escalates, you not only risk increasing your cost of treatment but creating a situation where your health is compromised.

If most people could afford better health coverage, they'd pay for it. But in the absence of that, there are a few things you can do to avoid joining the ranks of the glaringly underinsured. For one thing, comparison shop. Read up on what various plans cover and be sure to choose the option that best aligns with your specific medical needs.

Furthermore, don't be too quick to choose the plan with the lowest monthly premium. You'll mostly likely wind up with a higher out-of-pocket deductible if you go this route, not to mention higher copays.

Finally, prioritize health insurance above other expenses. You may need to cut back on different costs, such as housing, entertainment, or vacations, to free up more money for coverage. But of all the ways you might possibly choose to spend your money, there's really nothing more critical than securing the most comprehensive health plan available.

Whether we see much movement on the healthcare crisis in the coming months or years is yet to be determined, but one thing's for sure: A large percentage of Americans are walking around underinsured when they can't afford to be. And if you're one of them, it's time to rethink your personal approach to healthcare, even if that means making sacrifices you shouldn't have to make in exchange for some peace of mind.