Since before the Affordable Care Act was signed into law, a vocal group of Republican opponents have been warning that Obamacare would destabilize the private insurance markets. One of their biggest concerns was that only sick people would purchase coverage, which would ultimately send Obamacare into a "death spiral" that would only end when the program became prohibitively expensive for both insurers and consumers.

Ironically, some of the same lawmakers warning of an impending death spiral have taken a series of steps almost certain to usher in that very calamity. Let's examine how and why Obamacare is at risk of a death spiral -- and find out whether it can be stopped. 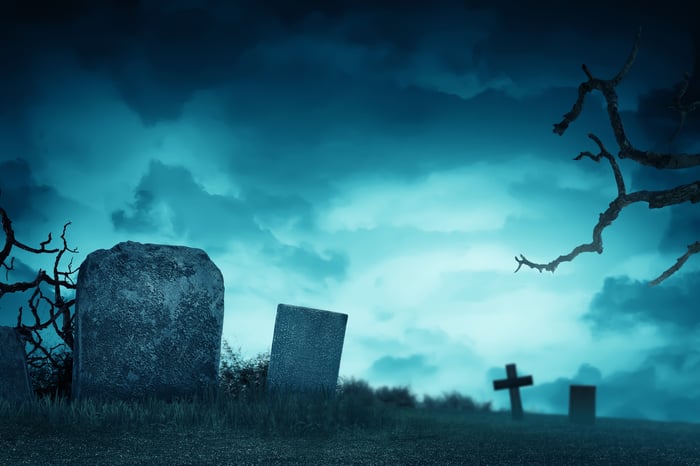 What is an insurance death spiral?

When health insurers sell policies, they need the majority of people who buy them to be healthy and make minimal claims. The premiums from healthy people allow insurers to pay millions for policyholders with serious illnesses like diabetes, cancer, and HIV.

Under Obamacare, insurers are not permitted to set premium prices for individual policyholders based on the individual's risk of getting sick. Insurers must charge the same price for everyone in the same age group and geographic area. Insurers thus set premium prices based in part on their assessment of the health of the entire risk pool. If an insurer mostly insures healthy young people, premium prices will be very low. But if the pool of policyholders has high demand for healthcare services, then insurers charge high premiums to compensate.

The problem is that many of the youngest and healthiest people may not think they need health insurance coverage. If insurance is expensive, or if there are significant barriers to getting coverage, they may take their chances without a policy.

This vicious cycle is the dreaded death spiral, and it will continue until premiums become so high that even very sick people can't afford coverage, and the insurance market is destroyed -- or until insurers simply decide to stop selling policies at all in the high-cost market.

Why is Obamacare at risk of a death spiral?

There have been worries about an Obamacare death spiral since the first day of open enrollment, when Healthcare.gov went live. Healthcare.gov is the federal website through which people can sign up for coverage if their own states haven't set up an Obamacare exchange.

Healthcare.gov had a lot of problems early on, frequently crashing and making it almost impossible for consumers to purchase coverage. When insurance is difficult to buy, only those who are most desperate for coverage -- i.e., the sickest policy shoppers -- persist to make a purchase.

While Healthcare.gov's problems were eventually resolved, this was just one of many threats to Obamacare's viability.

When Republicans put an end to a risk corridor program designed to reimburse insurers whose enrollees were sicker than expected, premiums rose. They rose again after repeated GOP efforts to repeal Obamacare during the first year of President Trump's term, in part because insurers were uncertain whether the government would continue to repay them for covering certain costs Obamacare required them to pay for low-income policyholders. The Trump administration also slashed advertising for Obamacare and shortened the open enrollment period.

Now Obamacare may have just been dealt a final death blow: Senate Republicans have approved a tax reform bill on a party-line vote that includes a repeal of the individual mandate. That's the part of the ACA that requires Americans to pay a tax penalty -- officially known as a "shared responsibility payment" -- if they go without health insurance.

With no mandate to purchase insurance, many healthy people are expected to leave the market while sicker policyholders stay. The Congressional Budget Office estimates that at least 13 million Americans could lose their Obamacare coverage over the next decade, with some opting out after the mandate's repeal and others being priced out of the market.

Can the Obamacare death spiral be stopped?

If the individual mandate repeal is part of the final tax reform package, stopping the death spiral could be next to impossible.

When a case before the Supreme Court challenged the constitutionality of the mandate, 27 Republican senators submitted a lengthy legal brief arguing that the mandate was integral to making Obamacare's reforms work as expected. Those senators were correct. Precedent in both Massachusetts and Washington state demonstrates that a mandate is key to maintaining a healthy risk pool.

When Massachusetts passed a law similar to Obamacare providing subsidies for coverage and imposing a mandate, the law was phased in. Subsidies became available for the purchase of insurance nearly a year before the mandate became operative, as the penalty was assessed based on whether residents were insured as of Dec. 31, 2007. Purchasing insurance in November made it possible to avoid the penalty. Enrollment jumped sharply among healthy residents when penalties were imposed for not buying: 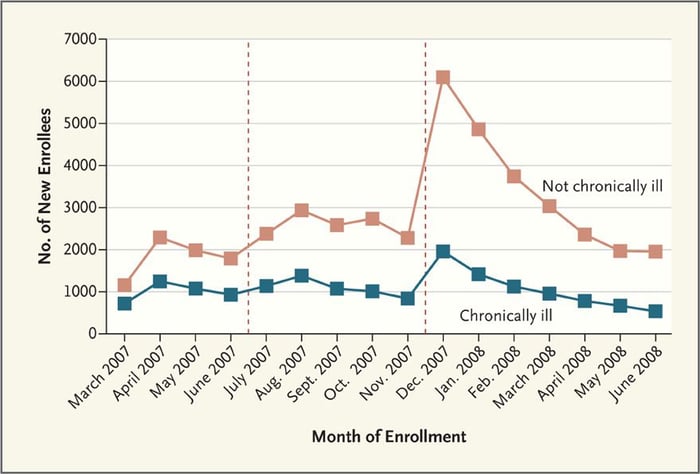 This is a strong indicator that offering subsidies alone is not enough to prompt healthy people to buy coverage; such a purchase needs to be made mandatory.

If past is precursor, and if healthcare experts are correct, then the absence of the mandate -- along with the other problems caused by lack of administrative support -- Obamacare is in grave jeopardy. It's almost certain there will be fewer and sicker enrollees, more healthy people opting out, and an inevitable death spiral.

Can this be stopped? Obamacare's only hope is for millions of young, healthy people to buy insurance coverage on the exchanges -- even if it becomes more expensive. Needless to say, the odds are not in Obamacare's favor.

What happens if the Obamacare death spiral occurs?

The future of the health insurance market, and of President Obama's signature legislation, is decidedly uncertain. If Republicans make no further changes during the remaining three years of President Trump's term, the exchanges may limp along, and the Obamacare market may essentially become an expensive, high-risk pool in which insurers offer costly coverage and the government pays ever-increasing subsidies to cover rising premiums.

Or the death spiral may be used as a pretext to repeal the law entirely, throwing the insurance market into further chaos unless a replacement plan is put in place.

Those buying policies on the open market may wish to consider investing in a health savings account so they at least have pre-tax funds available to pay for healthcare expenditures in case the insurance market is upended and the disruption causes a temporary gap in coverage.