Please ensure Javascript is enabled for purposes of website accessibility
Log In Help Join The Motley Fool
Free Article Join Over 1 Million Premium Members And Get More In-Depth Stock Guidance and Research
By Maurie Backman - Dec 12, 2017 at 8:36AM

Have a bit of money stashed away for emergencies? Here's why you might need even more.

With a new year approaching, now's the perfect time to start getting a better handle on your finances. And one crucial aspect you mustn't ignore is your emergency fund.

Simply put, no matter what you do, how old you are, or how much you earn, you need enough money in the bank to cover a minimum of three months' worth of living expenses -- but that's really just the minimum. Here are a few indications that a mere three months of living costs won't cut it for you.

1. Your income fluctuates a lot

The purpose of an emergency fund is to offer a fallback option when the unknown rears its ugly head, whether that means losing your job, getting injured, or having your roof cave in. So if your income tends to vary considerably from month to month, it stands to reason that you'll need more savings on hand than the average worker. 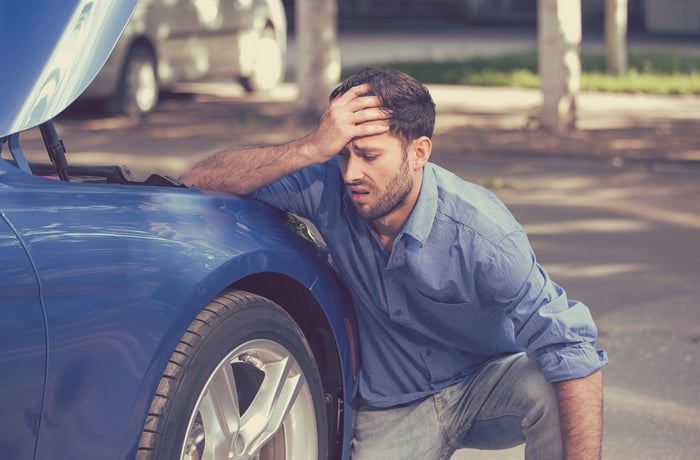 Imagine you're a salaried employee who brings home $4,000 a month. If your car breaks down and you're stuck with a $1,000 repair bill, the $4,000 your paycheck provides probably won't be enough to cover that expense, and so you'll need to tap your emergency fund to make up the difference. Now imagine that instead of earning a steady $4,000 each month, you earn that amount some months, but also have months where you bring home as little as $2,000. Suddenly, you don't just need that emergency fund to cover an unplanned bill like a car repair; you also need it to help supplement your existing living expenses.

While your budget should, ideally, be based on the low end of your earnings range when dealing with a variable income, most people don't follow that rule. But if you have a healthier-than-average emergency fund, you'll help compensate for the fact that your earnings aren't fixed and your budget doesn't necessarily assume the worst.

2. You have a known health issue

We just glossed over the fact that your emergency fund is there to protect you if you get hurt, and therefore can't work. But if you have a known medical condition that not only tends to cost you a lot of money, but puts your ability to work at risk, then it's even more imperative that you have emergency savings.

Imagine your health issue forces you to take a six-month break from your career. Though you might get some income during that time in the form of disability insurance, it typically won't come close to covering your entire paycheck. And if you're self-employed and can't work, you'll probably end up totally out of luck. On the other hand, if you have a well-stocked emergency fund, you'll have cash available to tide yourself over while you ride out whatever medical storm you're facing.

3. You're the sole breadwinner in a household with multiple dependents

Let's be clear: Folks without children or other dependents still need emergency savings. But if you're the lone earner in a household with multiple bodies to clothe and mouths to feed, then it pays to load up on emergency cash so you have that added protection. Remember, the more people you have living under your roof, the more opportunity there is for something unexpected to happen to one of them. Your eldest child, for example, might get hurt on the playground and need a costly surgery afterward. Or, something similar might happen to your youngest.

It's never pleasant to think about the many things that could go wrong in life -- especially to our loved ones -- but the fact of the matter is that when they do, it often takes money to help solve the problem. And the more you have, the more peace of mind you'll enjoy.

While there are plenty of folks out there who can get away with stashing three months of living expenses in the bank and calling it a day, that formula is by no means universal. Though you don't want to overfund your emergency savings, in certain scenarios, it pays to have six to nine months' worth of living costs in the bank, or even up to a year's worth. And though the idea of amassing that much savings might seem daunting, remember that you don't need to do it overnight. Work on boosting your emergency fund over time, and eventually, you'll get the protection you need locked away in an account with your name on it.