Please ensure Javascript is enabled for purposes of website accessibility
Log In Help Join The Motley Fool
Free Article Join Over 1 Million Premium Members And Get More In-Depth Stock Guidance and Research
By Katie Brockman - Dec 13, 2017 at 8:00AM

Even a few extra dollars per day can amount to hundreds of thousands of dollars over time.

The 401(k) plan is one of the greatest retirement tools available, and yet many people don't take advantage of all its benefits. Research from Alight Solutions revealed that about one in five Americans don't contribute enough to their 401(k)s to receive the full employer match, so they're essentially leaving free money on the table.

On top of missing out on employer matches, many workers aren't saving enough to ensure a financially secure retirement. Experts have long recommended that you save 10% to 15% of your paycheck for retirement, yet the average person only contributes around 6% of their pay, according to Vanguard's 2017 "How America Saves" report. 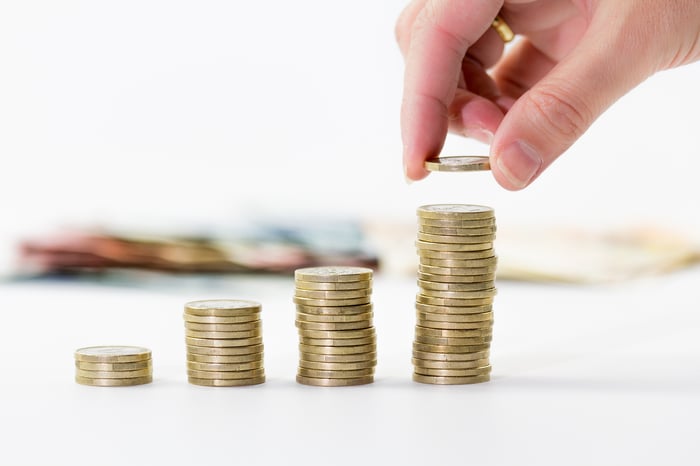 If money is tight and you're struggling to contribute anything at all to your retirement fund, it's easy to tell yourself that you'll just catch up later, or that the small amounts you might be able to contribute now wouldn't make much of a difference.

However, even a few dollars here and there can add up over time thanks to the power of compound interest, and you don't need to make big deposits to see big rewards. In fact, increasing your contributions by just 3% could grow your nest egg by 33% if you start soon enough.

The average American earns around $48,664 per year, according to the Social Security Administration, and contributes 6% of their earnings to their retirement fund. That means they're contributing around $2,920 per year.

Assuming your investments return an average of 7% annually, if you save for another 35 years, you'll have accumulated $647,861. Not a bad nest egg. However, if you were to increase your contributions to 9% of your paycheck (while still receiving the 3% employer match), you could boost your 401(k) savings far more than you might imagine.

What if you can't save an extra 3% per year?

While saving an extra 3% of each paycheck is doable for a lot of people, not everyone can afford it. But that doesn't mean you have an excuse not to save, because every penny matters.

If you already have, say, $1,000 in your retirement fund now, assuming a 7% annual rate of return on your investments, here's what your savings will look like in one year, 20 years, and 35 years if you were to save 1% of your paycheck versus making no additional contributions and letting compound interest do the heavy lifting:

By contributing less than $500 per year (or roughly $10 per week) and then doubling that amount by taking advantage of an employer match, you can boost your savings from just $10,000 to over $150,000 over a lifetime. In other words, saving even small amounts is 15 times better than saving nothing at all.

401(k)s are powerful retirement tools, especially if your employer matches your contributions. So don't be fooled into thinking you need to save a lot in order to grow your retirement fund significantly. Even tiny contributions can snowball into huge savings.