Depending on the type of bankruptcy you pursue, it could stay on your record for seven to 10 years. The good news? You can take steps to boost your credit even after you've filed.

Americans certainly aren't strangers to debt, despite the long-term dangers involved. But there comes a point when many of us will inevitably struggle to keep up with our debt payments, and if you're in that very boat, you may be considering the merits of filing for bankruptcy and starting over.

It's estimated that over 500,000 Americans declare bankruptcy each year, and while medical debt is actually the No. 1 cause, there are a host of reasons why so people wind up in this unfortunate predicament. The problem, however, is that filing for bankruptcy isn't the quick, painless solution some folks expect it to be.

Depending on the type of bankruptcy you declare, you can expect it to stay on your credit report for seven to 10 years, during which time you might struggle to get a mortgage, car loan, or apartment rental. You should also know that certain types of debt, like student loans, aren't dischargeable in bankruptcy. Before you rush to file for bankruptcy, you'll need to consider how doing so will impact your credit history -- and whether it's actually worth it. 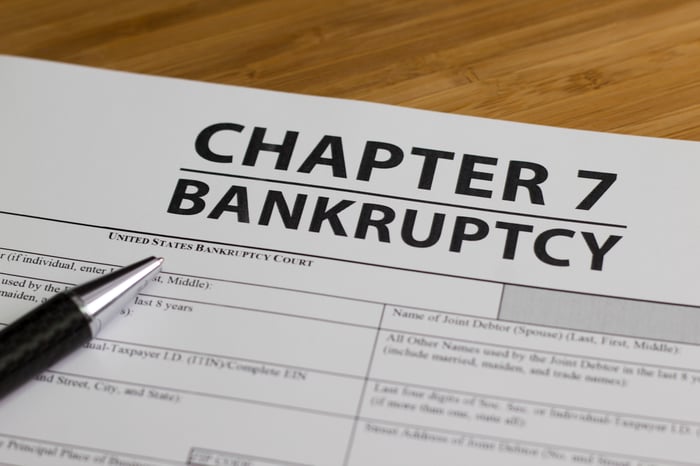 Bankruptcy has its consequences

Though bankruptcy might seem like an easy answer to your debt problem, it's a decision you might come to regret after the fact. That's because bankruptcy filings can remain on your credit record for years after the fact -- seven years if you file Chapter 13 and 10 years if you file Chapter 7. During that period, you might struggle to get approved for a credit card, apartment lease, auto loan, or mortgage.

You might also find that your bankruptcy filing lowers your chances of getting a job. Believe it or not, some employers access applicants' credit records before extending offers, and it's perfectly legal to deny someone a position because of his or her poor credit. Ouch.

Furthermore, you should be aware that contrary to popular belief, bankruptcy doesn't magically make all of your debt disappear. If you file for Chapter 13, you'll still be responsible for repaying your debts, but you'll get to do so in a reasonable, organized fashion. Chapter 7, by contrast, works more like a personal liquidation in which your assets are sold off to repay creditors. But there are certain types of debt that aren't dischargeable in bankruptcy, and these include tax obligations, student loans, and anything related to child support or alimony.

It's for these reasons that it often pays to consider alternate solutions before jumping into a bankruptcy filing. You might, for example, enlist the help of a debt settlement firm to negotiate with your creditors or make major changes to your budget to pay down your obligations more quickly.

If you do determine that filing for bankruptcy is your best course of action, then you might assume that your credit is doomed from that point on. Not so. There are several steps you can take to improve your credit following a bankruptcy filing. For one thing, start paying all future bills on time and in full. Of the various factors that go into your credit score, your payment history is the most important. Establish a pattern of paying your bills responsibly, and your score might recover more quickly than expected.

Similarly, you can boost your credit following a bankruptcy by making regular on-time payments on a secured credit card (a viable option if you can't get a regular one) or getting added as an authorized user to an existing account. In the latter scenario, pairing up with a responsible borrower will allow you to benefit from that person's smart payment habits.

Finally, though the following step won't help you build credit after a bankruptcy, establishing some emergency savings will help you avoid racking up future debt, thus protecting your score in a different way. The more money you have in the bank, the less likely you'll be not to be able to pay for an unplanned expense.

Though filing for bankruptcy isn't always a great idea, in some cases, you may have no choice but to go that route. If that's the case, the best thing you can do for yourself is work on boosting your credit in the years following that filing and take steps to avoid additional debt going forward.