Many of us dream of retirement. We may imagine ourselves golfing more, or gardening more, or just reading and puttering more. Much of the time, we envision doing such things in or from our current home, but many people end up relocating in retirement -- and many others should consider doing so.

Staying put can make good sense if your home is paid for, your taxes and other expenses are manageable, and you have a solid network of friends and family to socialize with and lean on, if and when necessary. But moving can make sense, too -- if you're moving closer to family or to someplace where you'll have a lower cost of living, better healthcare services, or more agreeable weather.

If you're interested in moving, consider moving abroad. Below are nine of the best places you might want to buy real estate for retirement, according to the folks at Live and Invest Overseas. They considered many factors: cost of living, crime and safety, the degree to which English is spoken, entertainment, environmental conditions, expat community, healthcare, infrastructure, recreation, residency options, and taxes. 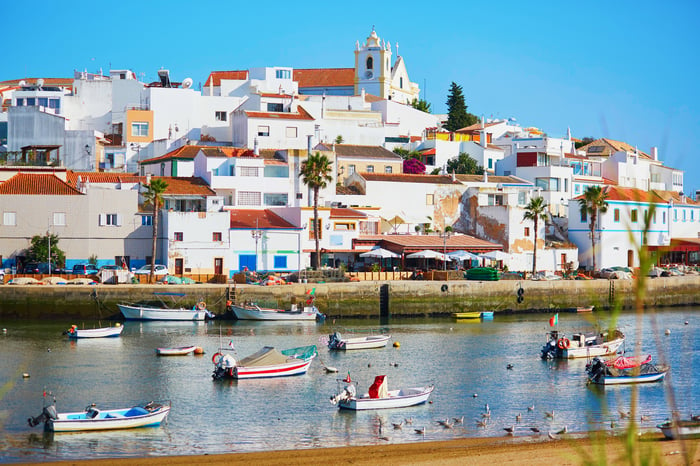 One of the most appealing features of Portugal's Algarve region is its healthcare, which ranks high for its quality. Portugal offers care to foreigners who live there legally and who have registered with the local health facility. You won't be there just for the healthcare, though. You'll probably also have been attracted by the region's pleasant weather, low crime rate, reasonable cost of living, and affordable real estate -- and perhaps for the numerous excellent golf courses and beaches. The cost of living is about 30% lower than elsewhere in Europe. A lot of English is spoken there, too: More than 100,000 foreigners have retired to the Algarve. 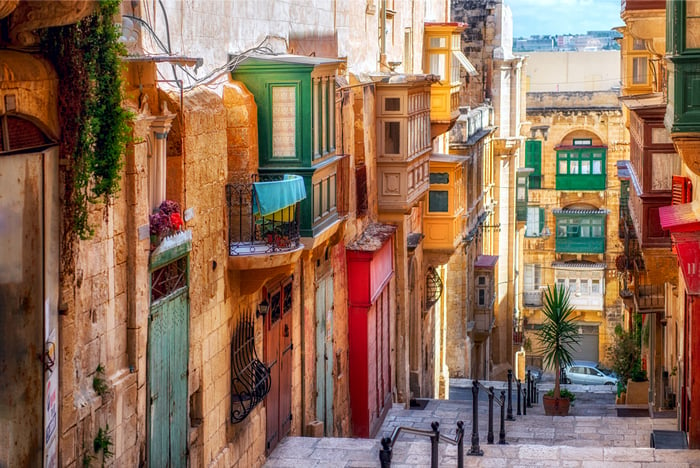 Malta is the European Union's smallest country, and Valletta is a small island within it. It features agreeable weather and, thanks to many years of British colonial rule, English-speaking residents. It's got a rugged coastline and plenty of historical interest. A lot of wine is produced in Valletta, and there's much nightlife to enjoy, if you're a nightlife-enjoyer. You can attain legal residency by renting a home; monthly rents for a 900-square-foot apartment were recently around $1,700 in a pricey part of town and around $900 in a more average neighborhood. 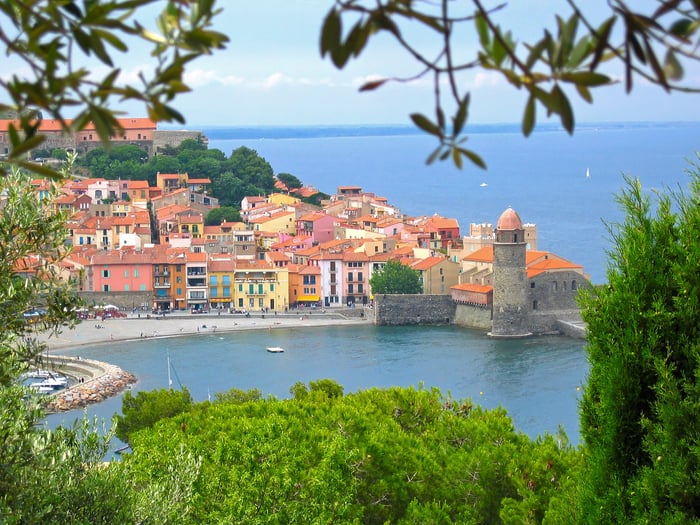 In France's Languedoc/Occitanie region on its southern coast, Saint-Chinian traces its roots back to a monastery founded in 825. The town is quite small, with a population around 2,000, but it still offers medical facilities, shops, restaurants, and a busy marketplace where you can get fresh produce, among other things. It's also a well-known wine-producing area. The pace of life is slower here than in many places, which will appeal to some retirees. 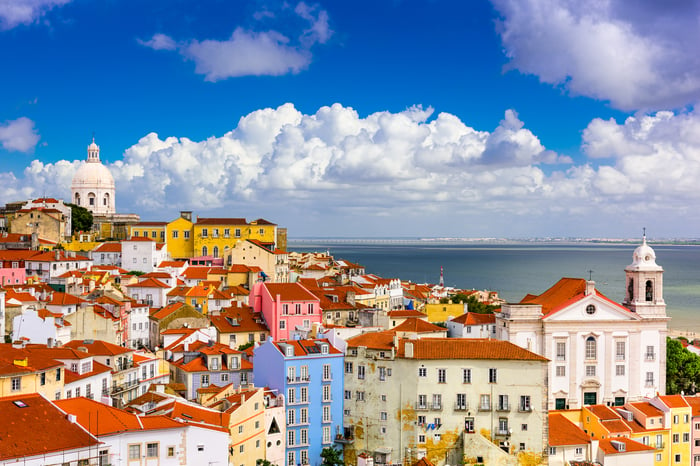 Retire in Lisbon and you'll be in a major European capital city with a population over 500,000 (within the city limits; the metropolitan area is larger). It offers warm weather, beaches, low crime rates, affordable housing, and plenty of cultural attractions. Lisbon is a good choice for those who enjoy music, theater, museums, nightlife, and more. Monthly rents for a 900-square-foot apartment were recently around $1,300 in a pricey part of town and around $900 in a more average neighborhood. 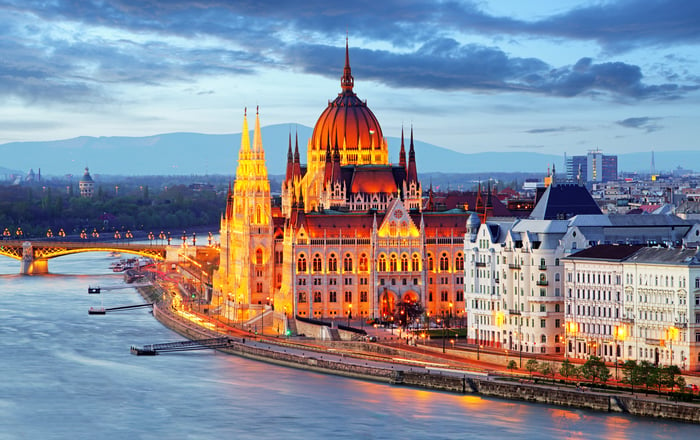 Budapest is another European capital with a lot to offer. It's big, with a population of over 1.75 million, and a river runs through it -- the Danube. The city offers everything from great restaurants and shopping to universities to thermal spas and outdoor pools. Best of all, Budapest is much more affordable than many major European cities. Monthly rents for a 900-square-foot apartment were recently around $1,000 in a pricey part of town and around $630 in a more average neighborhood. On top of that, public transportation and healthcare are both good, and foreigners are allowed to buy property in the country. 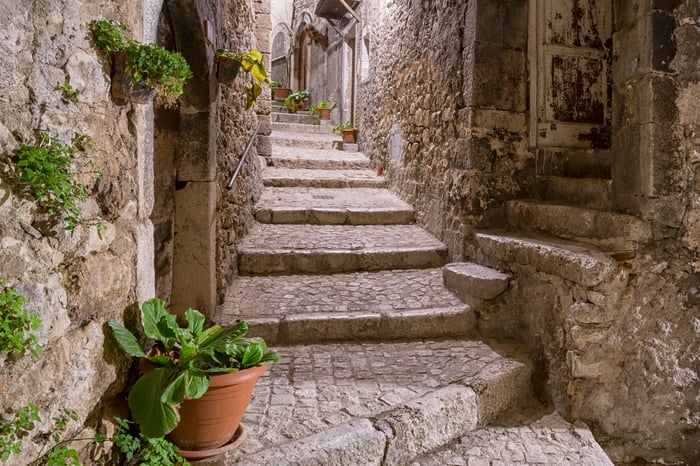 A stone alley in Pacentro, another town in Abruzzo. Image source: Getty Images.

About an hour away from Rome in the Abruzzo region, Citta Sant'angelo is a village of about 15,000 people, known for its beauty. Its landscape features vineyards and olive trees, and its cuisine offers seafood, breads, pastas, cheeses, and more. While some regions in Italy (such as Tuscany) are pricey, this region isn't, and it's estimated that a couple could live in Abruzzo for $1,400 per month, including housing and food. It will help to learn Italian to live in this area, as it's not as full of tourists as many others, and thus has not been catering for long to foreigners. 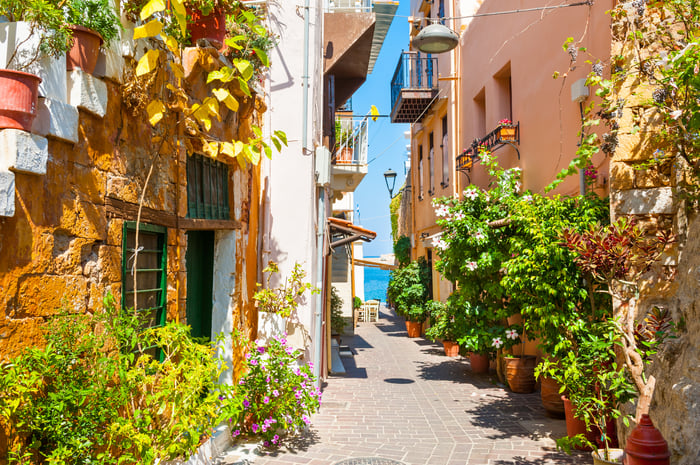 Chania sits on the largest of Greece's islands, Crete, and it's known for its beauty. With a population of about 55,000, it offers beaches, shops, and restaurants, with plenty of English speakers among the locals. Monthly rents for a 900-square-foot apartment were recently around $500 in a pricey part of town and around $400 in a more average neighborhood. You can get a permanent residency visa by buying a certain amount of property. Chania is great for those who like to eat out frequently, as it's so affordable. 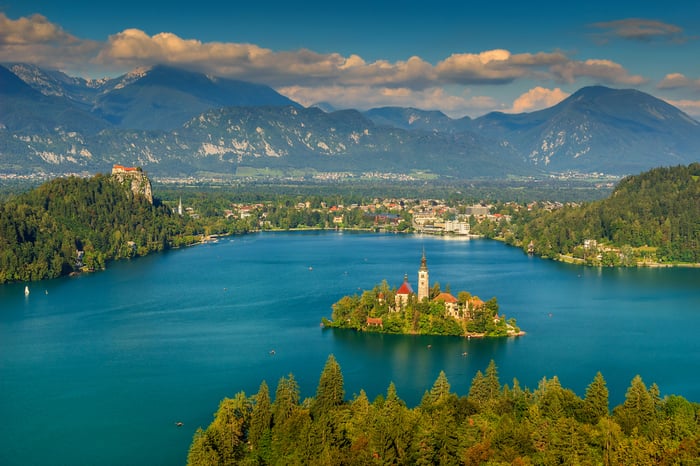 Known for its beauty, Bled is a popular lakeside resort town in the mountains, offering gobs of recreational opportunities, such as kayaking, horseback riding, golf, caving, biking, fishing, tubing, rafting, skiing, sledding, and more. Be warned that Bled is bursting with tourists during summer months. Many people speak at least some English, but it would be helpful to learn the local language. Slovenia is peaceful, with a low cost of living, low crime, good food, and reasonable transportation. It's estimated that a couple could live in the area for roughly $1,500 per month. 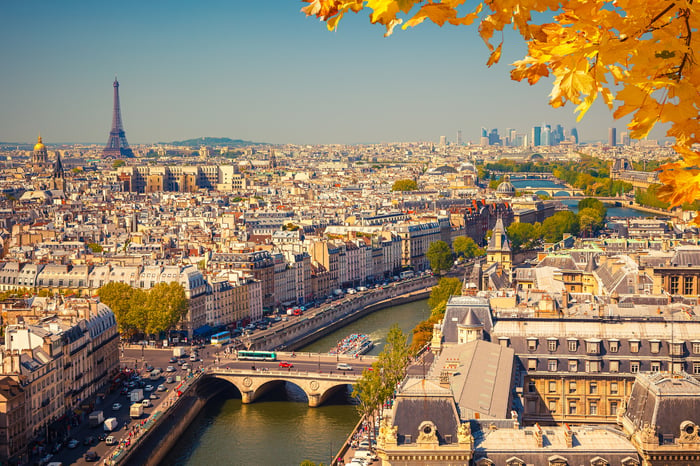 Finally, there's Paris, which needs little introduction. It's big, with more than two million inhabitants, and it's bursting with beauty and culture, museums and galleries, cafes and shops, bakeries and cheese shops, and wines. France's healthcare system is top-notch, with doctors even making house calls. The Marais is a neighborhood that's popular and trendy, featuring medieval architecture and cobblestoned alleys. It's estimated that about 200,000 English-speaking expats live in Paris. While many other destinations in this list are marked by affordability, Paris is much less so: Monthly rents for a 900-square-foot apartment were recently around $3,100 in a pricey part of town, and around $2,400 in a more average neighborhood.