If you're squeezing just enough money out of your paychecks to get by month after month, then you're not alone. In fact, 78% of workers say they live paycheck to paycheck, according to a CareerBuilder survey earlier this year. In this financial situation, it's incredibly difficult to save money, but it's still possible to squeeze some retirement savings out of even the scantiest paycheck.

If you spend every cent you make every month and never seem to get ahead, that means your income is the same as your expenses. An even worse situation arises when your expenses are higher than your income, in which case you're likely sinking deeper and deeper into debt with every month that passes. In either case, resolving the situation requires you to either reduce your expenses or increase your income until they come into a better balance. 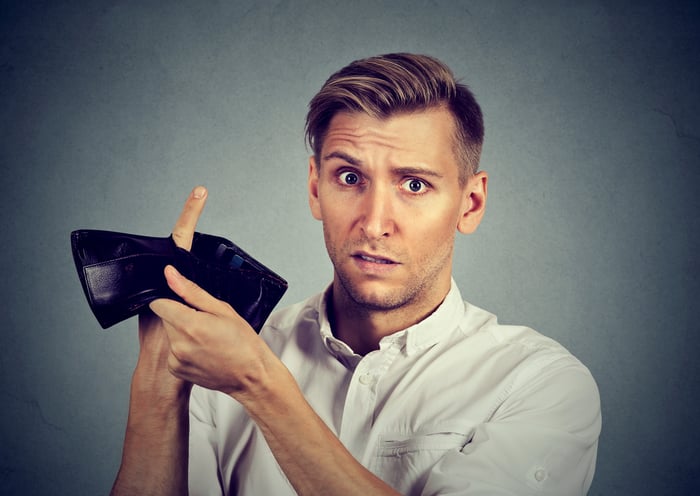 Yes, you really do need a budget

Before you can do anything constructive, you need to know just where your money is going. That means you need to create at least a basic budget to get you started. And while many people wince at the mere idea of budgeting, it's not difficult or even particularly time-consuming.

At the end of every day, simply write down (or better yet, type into a spreadsheet) everything you spent money on and how much you spent. This is easier if you get receipts for everything during the day; after you've written down your expenses, you can toss the receipts out. Keep this going for at least a month (two or three months is even better), and you'll have a pretty good idea of where all the money you earn is going. To make this process easier, try Mint, a free budgeting program from Intuit that you can use to track spending, pay bills and generate reports. Mint is also available as an app for both Apple and Android devices.

Once you know what your expenses are, you can start looking at fairly painless ways to cut them back. The best place to start is with expenses that are a complete waste of your money. For example, many people have memberships to gyms they never go to. This is money going down the drain, so cancel that membership immediately, and you'll have an excellent start to correcting your income issues. You may also be able to identify monthly expenses that you can reduce or remove entirely without missing out on anything. For example, look at your cellphone plan and see if you're really using as many minutes, texts, and gigabytes of data as you're paying for. If not, see if a cheaper plan would work just as well for you.

Small contributions are a great start

Let's say you've gone through the above budgeting exercise and have freed up $50 per month that you can now save for retirement. That may not sound like much money, but it can make an amazing difference to your retirement savings over the long term. For example, let's say you're 30 years from retirement and you invest your $50 monthly contribution in a stock index fund within your IRA or 401(k). Assuming you get an average annual return of 8% on that investment, you'll end up with $73,408 by retirement. That's not enough to live on by itself, but it's sure a whole lot better than nothing. And remember, your income will likely go up in the future -- which means you'll be able to increase that contribution over time.

When your contributions are this small, you need to do everything in your power to maximize returns. Consider the above example: If you were lucky enough to get a 10% average annual return instead of 8% over 30 years of saving, you'd end up with $108,566 instead of $73,408. And when it comes to getting the highest possible average returns, stocks are king. Since 1926, large company stocks have returned an average of 10% per year -- far higher than most other types of investments.

However, stocks do have one big disadvantage: They're unpredictable. While long-term average returns are very high, in the short term, returns can vary tremendously. The good news is that while you're still working, a plummeting stock market that tanks your retirement investments won't hurt your finances directly as long as you don't sell (though it might cost you a few sleepless nights). As you get closer to retirement, you'll need to shift your holdings away from stocks and toward bonds, but keeping your stock investments as long as possible can compensate somewhat for small contributions. It's a relatively risky approach, but if you can't save more than a tiny percentage of your income, it may be the best option for you.

Once you've been contributing to retirement savings for six months or so, you can try pushing the envelope a bit by raising that contribution level slightly. For example, if you've been saving $50 per month, try raising your contribution to $60 per month. You'll likely find that you won't even notice such a small difference in your available income. After a few more months, you can try raising your contribution by another few dollars. This approach isn't glamorous, but it is a lot easier to live with than trying to immediately save the recommended 10% to 15% of your income for retirement.

Contributing even a tiny percentage of your income can, over time, produce impressive funds in your retirement savings accounts. By harnessing the high average returns that stocks can produce, combined with careful budgeting, you can end up with more money than you ever dreamed possible.