The short answer: You'll owe the IRS even more.

Each year, most Americans who file tax returns wind up getting a refund from the IRS. But if you're in that minority of folks who end up owing money, you'll need to get that bill settled up by the tax filing deadline to avoid penalties.

This year, the tax filing deadline for 2017 returns is April 17. Notice that we all get a few extra days this year, since April 15 falls on a Sunday and Monday, April 16 is Emancipation Day, a D.C. holiday that pushes the deadline to Tuesday. This means if you owe the IRS any amount on your taxes, you need to get that bill settled by April 17 to avoid a penalty -- or you'll be charged interest on any unpaid taxes owed to the IRS past that point. 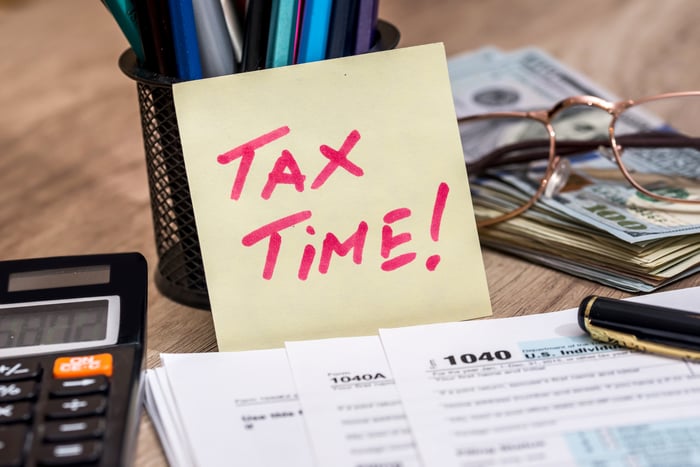 The cost of paying your taxes late

If you owe money to the IRS upon completing your tax return, it's best to make that payment on time. Otherwise, you'll face a late payment penalty equal to 0.5% of your unpaid balance. That penalty is applicable for each month, or partial month, in which you owe the IRS money past the April 17 deadline.

However, you must file your tax return by April 17 if you owe money, even if you can't pay that tax debt in full or at all. That's because the penalty for filing a tax return late is 10 times as severe as the penalty for being late with your payment. Specifically, if you don't file your tax return in time, or request a tax extension by the filing deadline, and you owe money on that return, your penalty will equal 5% of your unpaid tax bill for each month or partial month your return is late. And that penalty can grow to equal up to 25% of your unpaid taxes before the IRS finally stops dinging you.

Keep in mind that if you have a month in which both the failure to file and late payment penalties apply simultaneously, you won't be charged more than 5%. Still, it pays to at least file your tax return or request an extension on time to avoid hurting yourself more financially.

Another thing to note is that if you file your tax return more than 60 days past the deadline (whether the original April 17 deadline or the extended October deadline), you'll face a minimum penalty of $135 or 100% of your unpaid tax bill -- whichever is smaller.

Don't fall back on a tax extension

So say you've prepared your tax return and see that you owe money you can't pay. Your first inclination might be to request an extension and push your personal filing deadline all the way back to October. It's a good idea in theory, but what you need to realize is that tax extensions simply give you more time to file your return; they don't actually buy you extra time to pay your tax debt. This means that if you file an extension by April 17 but don't pay your tax bill by then, you'll start to accrue the aforementioned late payment penalties. You will, however, avoid the failure to file penalty that's far more substantial than the penalty for being late with your payments.

Prepare your taxes ahead of time

One way to ensure that you're not late in paying your taxes is to prepare your return well in advance of the April 17 deadline. This way, you'll know what sort of tax debt you're dealing with, and you'll have an opportunity to come up with that money over the next couple of months.

For example, say you find that you owe the IRS $600 as a result of having underpaid your taxes during 2017. If you don't have the money in savings and realize you owe that much in early April, you'll have just a week or so to scrounge up the cash, thus putting yourself at risk for the late payment penalties we talked about earlier. But if you get your paperwork in order this month and find that you owe that money, you'll easily have six weeks to come up with a plan. That might mean taking on a side job that pays you $100 a week, or significantly cutting back on expenses to free up that cash in time.

Owing money to the IRS is no fun, but if you give yourself time to prepare for a tax bill, you'll minimize the extent to which you rack up penalties. And that'll help you avoid giving the IRS even more of your hard-earned cash.