Many of us would love to retire early. But whether we get to depends on the choices we make during our working years.

Countless folks hope to retire early so they can enjoy the flexible lifestyle that comes with not having a full-time job. Now when we talk about retiring early, that concept can run the gamut from calling it quits in one's 40s or 50s to leaving the workforce in one's early to mid-60s. But for the purpose of our discussion, we'll define retiring early as halting one's career before reaching full retirement age for Social Security purposes -- in other words, retiring before 66.

So where do Americans stand on early retirement? If we look at recent data from Paychex, it's pretty clear that the bulk of workers would like to retire at or before age 65. Specifically:

But while it's nice to dream about early retirement, the reality is that it's something most Americans can't afford. Consider this: The median savings balance among adults aged 56 to 61 is a paltry $17,000, according to data from the Economic Policy Institute. And that's hardly enough to set the stage for retiring ahead of schedule. 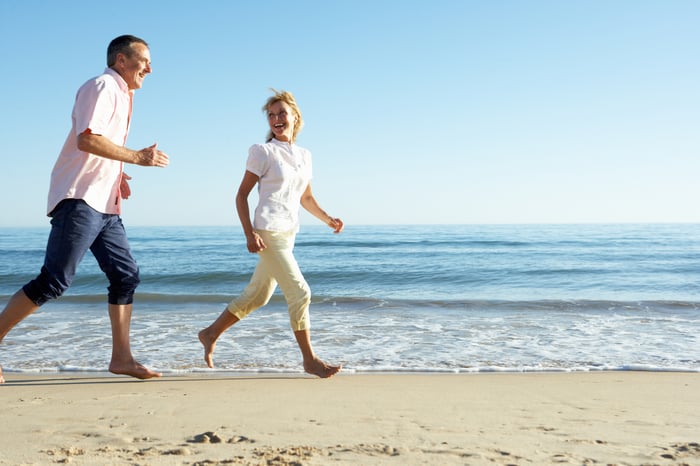 The dangers of retiring early

Let's be clear: There's nothing wrong with retiring early if you're in the right financial position to do so. But most Americans aren't. In fact, nearly half of U.S. households today have no money set aside for retirement, and while there's always the option to work part-time later in life, that's not a path all seniors will ultimately wish to pursue.

Now you might argue that retiring at, say, age 61, is a much different prospect than retiring at 51, and you'd be correct. But even that poses some problems. For one thing, to retire at 61 means leaving the workforce without access to Social Security, as seniors aren't eligible for benefits until 62 at the earliest. Furthermore, filing for Social Security before full retirement age means taking an automatic reduction in benefits. And given the aforementioned statistics on personal savings, that's not a hit most seniors can afford.

Furthermore, you should know that retiring prior to age 65 means calling it quits before having access to Medicare coverage. And given that healthcare can easily come to be your greatest expense later in life, that's a pretty huge risk to take.

Even if you have saved reasonably well for retirement during your working years, don't forget that Americans are living longer these days. In fact, one in four will live past the age of 90, while one in 10 will live past 95. Leaving the workforce early increases the likelihood that you'll outlive your nest egg, whereas the longer you work, the longer you avoid dipping in.

So now that you've been warned about the dangers of early retirement, let's talk about how to get there if you're serious about leaving your career behind sooner rather than later. For one thing, you'll need to start saving to accommodate that goal, and the earlier you begin, the better.

Check out the following table, which highlights the importance of saving at the earliest point possible in your career:

You'll notice that $400 a month isn't a particularly overwhelming sum; it's not even close to maxing out a 401(k). But while saving $400 a month over 40 years will get you close to $1 million, you'll come away with far less if you delay your savings efforts to a later age.

Furthermore, you'll notice that the aforementioned totals assume an average yearly return of 7%, which is actually a bit below the stock market's average. If you want your savings to grow considerably to allow for an early retirement, you'll need to go heavy on stocks; sticking to safer investments like bonds won't get you nearly as much growth.

Finally, if you are going to retire ahead of schedule, have a plan for how you'll cover your healthcare needs. This either means saving enough to pay for private insurance until you become eligible for Medicare, or waiting until you turn 65 to get Medicare benefits. Keep in mind, however, that Medicare won't cover everything, so read up on the many services it won't pay for.

It's one thing to want to retire early, but it's another thing to work toward making that dream a reality. Most Americans today aren't in a position to retire ahead of schedule, but if you focus on saving steadily and investing wisely, you may come to find that you're able to leave the workforce exactly when you want to.