Hint: It involves filing your taxes.

Though I've argued many times in the past that the average American should not be getting a tax refund, the fact of the matter is that year after year, the majority of filers wind up with money back from the IRS. In fact, the agency predicts that roughly 70% of taxpayers will end up with refunds in 2018 -- which is good news for those saddled with credit card debt. That's because the average refund should be enough to help the typical American pay off just over half of his or her outstanding balance.

The average tax refund for 2016 was $3,050, and according to ValuePenguin, that's enough to cover 55% of the average U.S. credit card balance of $5,551. Not only will knocking out half of your debt save you money on interest charges, but it might, in some cases, help bring your credit score up. That's because the less credit you're using at once, the lower your utilization ratio will fall, and that, in turn, could boost your credit. 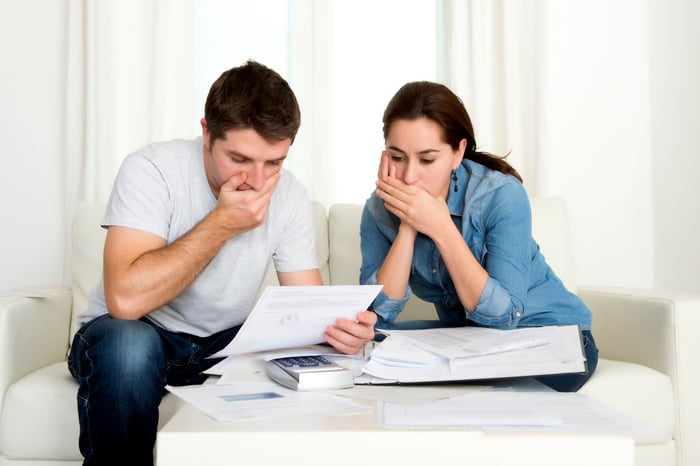 But while some tax filers may indeed use their refunds this year to pay down debt, you can bet there will be plenty of folks who take that money and spend it elsewhere instead. And they're the ones who will be more likely to carry that debt for the long haul.

The danger in getting a tax refund is that you might look at that lump sum as free money, when, in fact, it's your money that you earned last year but failed to collect. And if you don't use that money wisely, you could end up hurting yourself financially.

Imagine you owe $3,050 on your credit card and it takes five years to pay it off at 20% interest. In that scenario, you'll wind up throwing out about $1,800 on interest charges. But if you use your refund to pay off that sum, you'll have an extra $1,800 to work with. And that's not the sort of savings you want to forgo, especially since the majority of Americans have less than $1,000 in the bank.

Tempting as it might be to spend your tax refund on something fun this year, resist the urge to indulge if you have credit card debt hanging over your head. You'll be thankful for it in the long run.

Other smart uses for your refund

Of course, not everybody has credit card debt, and if you've managed to avoid it thus far, you're ahead of the game. Still, that doesn't mean you shouldn't use your refund responsibly. If you don't have a balance to pay off, your refund can help you amass a more substantial emergency fund, which, as we just saw, is something most Americans need.

Another option for your tax refund this year? Stick it in your IRA or 401(k). Both accounts let your money grow on a tax-deferred basis, which means that if you invest $3,050, leave it alone for 30 years, and manage a 7% average annual return on investment, you'll come away with $23,000. And that sort of money can buy you a lot more financial flexibility in retirement.

Ways to pay down debt

While it's a good thing that the average tax refund could be enough to help the typical American pay off half of his or her debt, there's still that other half to contend with. But worry not -- there are several steps you can take to eliminate that remaining debt sooner.

For one thing, be strategic about how you pay off your balances. If you owe money on several cards, tackle the ones with the highest interest rates first, and then work your way downward. Another option? Look into a balance transfer, where you move your debts to a new credit card with a lower interest rate, thus reducing your payments on that total sum.

Finally, consider taking steps to boost your income so you have the option to pay off your debt sooner. If you're willing to work a side hustle for, say, the remainder of the year, that extra money might allow you to knock out your debt well before next year's tax refund even comes into the picture.

Whether you use your tax refund this year to pay off a chunk of your debt, pad your existing savings, or add to your nest egg, the key is to use that money responsibly. Otherwise, you may come to regret it later on.