Please ensure Javascript is enabled for purposes of website accessibility
Log In Help Join The Motley Fool
Free Article Join Over 1 Million Premium Members And Get More In-Depth Stock Guidance and Research
By Maurie Backman - Feb 25, 2018 at 6:48AM

Hint: It's nowhere near adequate.

We're constantly warned to set money aside for life's unknowns, yet most Americans are woefully unprepared for financial emergencies. In fact, nearly 40% of U.S. adults have absolutely no money in the bank, while more than 50% have less than $1,000 saved.

But what's even more disturbing is the fact that 54% of Americans are in no way equipped to cover the cost of an unplanned medical issue, according to a new GOBankingRates study. Specifically, 25% of Americans have less than $100 set aside for medical expenses, while nearly 50% have less than $1,000 socked away for this purpose. 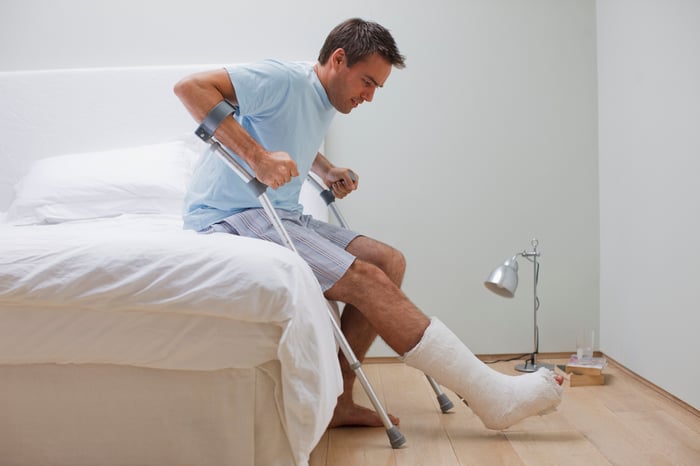 The problem, of course, is that medical expenses can quickly escalate, and they're not the sort of thing you can avoid. For example, if you have a home that's costing you too much money to maintain, there's always the option to sell it. The same holds true for a car that keeps having problems. But if you're diagnosed with a health issue or are told you'll need surgery, that's hardly the sort of expense you can eliminate.

In fact, each year, countless Americans rack up major levels of debt not because they go on spending sprees, but because their medical costs come in much higher than expected. It's no wonder, then, that medical debt is the No. 1 source of personal bankruptcy filings in the country.

If you're not saving adequately for medical expenses, then you're putting not only your health, but your finances, at risk. And that means it's time to start doing better.

The right way to prepare for medical emergencies

There are a couple of different approaches you can take to protect yourself from the costs associated with a medical emergency. Your first option is to have a fully loaded emergency fund with enough cash to cover six months' worth of living expenses. The logic behind amassing that much cash is that if you were to lose your job, or get hurt and find yourself unable to work for that long a period, you'd be covered financially. However, six months represents somewhat of an extreme scenario, and therefore, you might roll your medical emergency savings into that rather large sum.

Another option is to set money aside specifically for medical purposes -- in other words, an account you can't touch if your car breaks down or your roof springs a nasty leak. To start, figure out what your deductible is under your current insurance plan, and save at least that much. Remember, in most cases, your insurance company won't start to cover your services until that deductible is met.

On top of that, it pays to review the out-of-pocket costs associated with your plan and put aside a little extra for the unknowns you might face. For example, if a hospital or ER copay is $250 under your plan, you might choose to save that sum on top of your total deductible. After all, it's conceivable that you might meet that deductible midyear, get hurt later on in the year, and wind up with an additional large bill on your hands, so the more money you have earmarked for medical expenses, the more protection you'll have.

While it's crucial to save for medical emergencies, it also pays to take steps to keep your expenses to a minimum. You can start by making sure your insurance plan is the right one for you. Sometimes, it pays to take on a higher premium if it buys you superior coverage that saves you money down the line. Second, make sure you really understand your benefits, and know which providers you're allowed to use. Seeing a doctor who's out of network could easily add several hundred dollars to your tab.

Finally, take advantage of flexible spending accounts and health savings accounts if you're eligible. Both plans allow you to contribute pre-tax dollars to cover your medical needs, thus saving you money right off that bat.

No one is immune to medical emergencies. You can eat right, exercise daily, and still wind up with an unexpected illness or injury that costs you more money than you'd imagine. Saving to cover that sort of scenario will help you avoid a whole lot of stress and help you focus on the most important thing at a time like that: your recovery.