Please ensure Javascript is enabled for purposes of website accessibility
Log In Help Join The Motley Fool
Free Article Join Over 1 Million Premium Members And Get More In-Depth Stock Guidance and Research
By Katie Brockman - Feb 25, 2018 at 9:04AM

If you're not strategic about paying off debt, you could cost yourself thousands of dollars.

You work hard to save for retirement, stashing away as much as you can and diligently staying on track to meet your goals. As hard as you try, though, there's still one thing that may be standing between you and a comfortable retirement: debt.

Two-thirds of Americans aged 65 to 74 hold some type of debt, and median household debt for people aged 65 and up has doubled from 2001 to 2011, according to a study from the Global Financial Literacy Excellence Center. 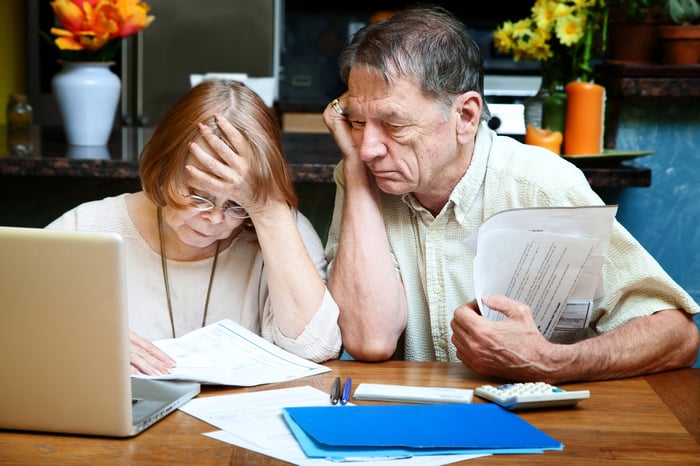 Debt is not necessarily a bad thing. It's nearly impossible to go through life without taking on some type of debt, whether it's in the form of mortgages, student loans, car loans, or credit card debt. But if you're nearing retirement age and are still putting hundreds (or thousands) of dollars each month toward repaying debt, it could potentially sabotage your retirement plans.

Facing debt during retirement: More harmful than you may think

If you've been paying off some form of debt for most of your life, you may think nothing of continuing to pay it down during retirement. But when you're living on a fixed income, every dollar counts.

Debt can be harmful both in the years leading up to retirement and during retirement itself. As you're getting closer to leaving the workforce, you're probably kicking your savings into overdrive, and it's harder to save when hundreds of dollars per month are going toward debt payments. Once you reach retirement and are living on a fixed income, those payments can eat up a significant chunk of your monthly income.

Even if you're only paying a couple hundred dollars per month toward debt, it can have a major impact on your overall savings.

It's also important to keep interest rates in mind. If you're earning a 7% annual return on your investments but paying 18% annual interest on credit card debt, for example, you may end up paying more in interest than you're earning.

Some people can't escape debt entirely; if you're still paying off a mortgage, for instance, you may not be able to have it paid off by the time you retire. However, being strategic about how you pay down debt can save you money.

Not all debt is created equal, and some forms are more harmful than others. High-interest debt, such as credit card debt, is the worst offender and will end up costing you the most. Credit card interest rates typically range from 15% to 20% per year, whereas a 30-year fixed-rate mortgage averages around 4% per year.

Tackling debt with the highest interest rate first will pay off in the long run, potentially saving you thousands of dollars. For example, say you're carrying $5,000 in credit card debt and paying 19% in annual interest. If you're putting $100 per month toward that debt, it will take you over eight years to pay it off, and you'll end up paying around $4,977 in interest during that time period. However, if you were to contribute $150 per month instead, you'd have it paid off within two years, paying just $2,158 in total interest.

If you're struggling to pay down debt and save for retirement at the same time, delaying retirement by a few years may be worth considering. Although not fun, those couple of extra years to save and pay down debt can make a world of difference. For instance, if you're 50 years old with $100,000 saved for retirement and contributing $100 per month to your retirement fund and earn 7% per year, here's what your savings could look like if you retired at 62 versus waiting until age 70:

Finally, if you absolutely must withdraw money from your retirement fund to cover debt, try to hold off until you reach age 59 1/2 to avoid paying the 10% early-withdrawal penalty. Keep in mind that this should be a last resort and is only called for if you're deep in debt and paying more in interest than you're earning on your investments. You may also choose to take out a 401(k) loan, which will force you to pay back the loan with interest, helping you get your savings back on track. Just remember that you typically need to pay a 401(k) loan back within five years, which may not be possible depending on the size of the loan.

Debt may be a fact of life, but that doesn't mean you can't be strategic about paying it down. By being aware of how much you're putting toward debt and how it's affecting your long-term savings, you can make smarter decisions that will ultimately lead to a more enjoyable retirement.