One of the most challenging aspects of saving for retirement is not knowing how much money you'll need to pay the bills in the future. After all, without a crystal ball, it's impossible to predict how long you'll live and what your expenses will look like 10, 20, or 30 years down the line.

But while you can't get a precise handle on that figure, you can work off of the national average to establish a baseline savings target. And if you want to know what retirement costs the typical senior, the answer is $828,000. 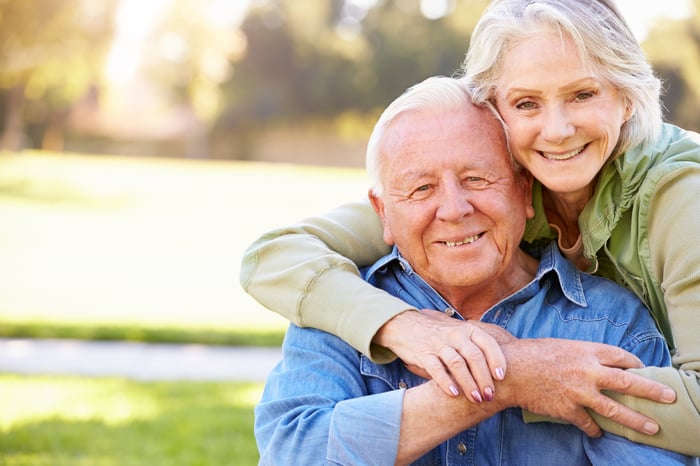 Now the good news is that $828,000 is more than attainable if you commit to saving early on. The bad news? Most Americans don't have anywhere close to that amount socked away at present. According to GOBankingRates, here's how workers across the board are doing on retirement savings:

Now it's one thing for younger workers -- say, those in their 20s or 30s -- to have less than $10,000 set aside for retirement. But roughly one-third of adults 55 and over are also in the same boat, which means they have a limited window for catching up.

Furthermore, even younger workers need to do a better job of saving adequately. Otherwise, they risk falling short when retirement finally rolls around.

You can do better

As a general rule, workers today are advised to set aside 15% of each paycheck or more for the future. Most folks, however, can't hit that target, whether because of limited earnings or existing bills. If setting aside that large a chunk of your income isn't feasible for you, then your next best bet is to look at your current savings rate and work on increasing it, because even a modest boost can go a long way.

Where will the extra money come from? It depends. If you have areas to trim in your budget, downgrading your cable package and eating out less frequently could free up enough cash to nicely boost your savings rate. Or, you might go big and opt to slash one major expense, like your rent or car payment, to achieve the same effect.

If there's really no room to cut down in your budget, then your next best bet is to make more money. Now that may be easier said than done at your current job, but if you're willing to pick up a side hustle, you can bank the difference and use it to fund your nest egg.

If you still have a number of years in the workforce ahead of you, you have the luxury of making small changes that'll add up over time. But if time is the one thing you don't have, then you'll need to go big during your remaining working years if you want a shot at a secure retirement. Currently, workers over 50 can contribute up to $6,500 a year to an IRA, and $24,500 a year to a 401(k). Max out the latter for 10 years, and you'll add a good $338,000 to your nest egg on top of what you already have.

If you can't max out a 401(k), do your best -- but don't just settle for minor lifestyle adjustments. Rather, work a second gig, downsize your home, unload a non-essential vehicle, and cook 95% of your meals at home to avoid paying restaurant markups. Even if retirement doesn't end up costing you $828,000, you can bet on it costing way more than $10,000, so if you want a shot at a reasonably comfortable lifestyle, you'll need to make the effort today.