Each year, roughly 80% of tax filers get a refund, and 2018 will probably be no exception. If you're expecting cash back from the IRS, you might have some big plans for that money -- especially if it's a sizable sum. And chances are, it will be. Last year, the average American collected a $2,763 refund, which is more money than most folks have in the bank.

Yet a frightening number of those who expect a refund on their 2017 returns aren't aiming to use that money responsibly. A good 29% plan to spend that cash on a vacation, while 35% intend to splurge on something for themselves, according to recent data from Twine and John Hancock. 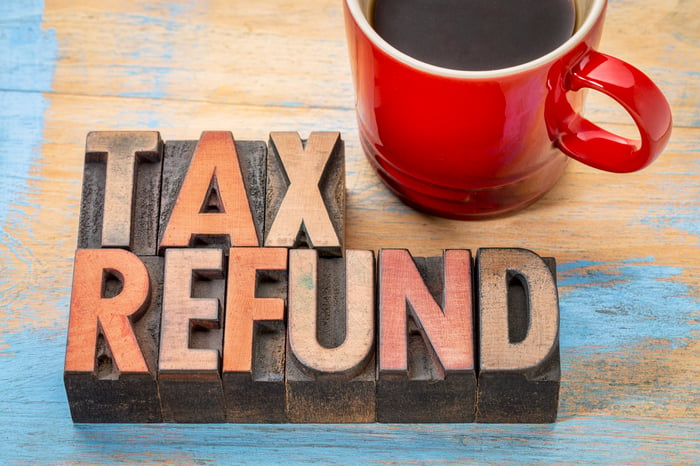 If you're getting money back from the IRS this year, it pays to treat that sum not as a windfall, but as income that should've been yours all along. And here's how you should plan on using it.

In a Bankrate study published earlier this year, over 60% of Americans said that their savings wouldn't suffice in paying for a $1,000 emergency. If you're behind on savings, the best thing you can do with your refund is stick it directly into the bank. No matter your age or income level, your goal should be to have a minimum of three months' worth of living expenses available at all times. If you're nowhere close, then do yourself a favor and use that tax refund to buy yourself the financial security you need.

If you're sitting on costly credit card debt, you should know that for each day you carry a balance, your interest will continue to compound against you, thus adding to the amount you owe and trapping you in a seemingly endless cycle. So instead of using your tax refund for a vacation, use it to buy yourself a rapid exit. Applying a $2,763 tax refund to an existing balance will save you over $300 in interest if it would've otherwise taken you a year to pay off that sum at 20%. And given that most Americans are sitting on less than $1,000 in cash, $300 isn't an amount you should be too quick to give up.

Maybe you've been neglecting your retirement savings because you're low on cash or find that your living costs eat up your entire paycheck. No matter the case, a tax refund gives you a solid opportunity to put money away for the future.

Incidentally, contributing to a traditional IRA or 401(k) will lower your taxes as well. That's because these are accounts are funded with tax-free dollars, which translates to instant savings for the 2018 tax year. Plus, you'll benefit from tax-deferred growth on your money, which will help you amass a decent chunk of savings in time for retirement.

A recent Student Loan Hero survey found that 44% of parents feel guilty for not setting aside enough money to pay for their kids' college. If you have children who, presumably, will one day want to pursue a degree, the money you get in your tax refund could go a long way toward helping you pay those hefty tuition bills.

Imagine you're looking at a $2,763 refund. If you put that money into a 529 plan that averages a 7% return over the next 15 years, you'll wind up with just over $7,600, and that sum will be yours free and clear of taxes. Of course, $7,600 won't come close to paying for even the cheapest college education, but it'll make a dent. Furthermore, if you get into the habit of putting your tax refund into a college fund year after year, you stand to accumulate a nice amount of savings that your children will surely appreciate.

Expanding your skill set won't just buy you additional job security; it could open the door to a promotion or raise, whether at your present company or another. Rather than blow that refund, consider using it to invest in yourself. Take a course you've been meaning to sign up for but didn't due to a lack of funds. Or, use that cash to attend a business conference your company won't pay for, and seize the opportunity to network. You might even use your refund to purchase equipment that'll make you better at your job. Either way, it's the sort of investment that could pay off big time.

No matter what you do with your tax refund this year, don't make the mistake of wasting it on a fancy gadget or quick getaway. Will those things bring you happiness? Sure. But the benefits you'll reap from using that money responsibly will be far more significant in the long run.