Please ensure Javascript is enabled for purposes of website accessibility
Free Article Join Over 1 Million Premium Members And Get More In-Depth Stock Guidance and Research
By Maurie Backman - Apr 3, 2018 at 7:09AM

Often hailed as the ideal savings number, $1 million will only go so far in some states. Consider yourself warned.

When we talk about saving for retirement, we're often told that a $1 million nest egg is the magic number to aim for. But depending on where you live as a senior, $1 million may not get you very far.

GOBankingRates analyzed the buying power of $1 million across all 50 states and found that it might last for less than 12 years in retirement, or it might last upward of 26 years, depending on your zip code. It pays to review this data because it could not only inform your decision on where to retire, but also prompt you to boost your savings efforts during your working years. 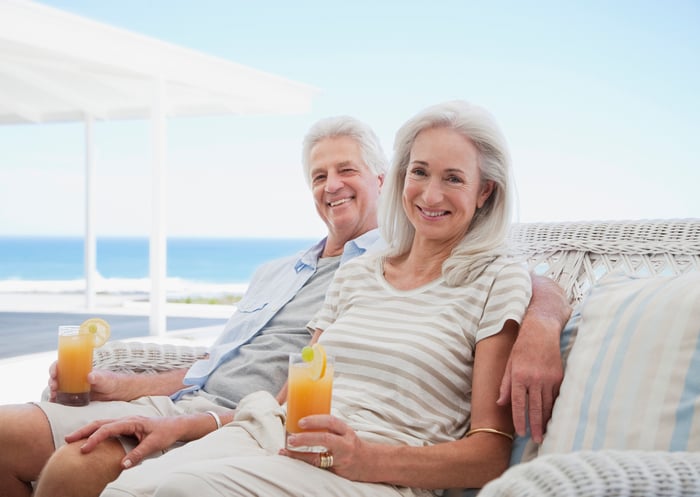 Here's where $1 million won't get you very far

Those states that tend to have the highest cost of living in general are also the least retiree-friendly, monetarily speaking. In Hawaii, for example, a $1 million nest egg will last just 11 years and 11 months on average when you factor in costs such as housing and groceries, which are higher there than in any other state in the nation.

Meanwhile, a $1 million nest egg will typically last for 16 years and five months in California and 17 years in Alaska. Chalk it up to high housing prices for the former and high food and consumer goods costs for the latter.

Moving over to the East Coast, we find that a $1 million nest egg in New York will last for 17 years and one month on average, mostly due to outrageous housing costs. And retirees won't fare much better in Massachusetts, where $1 million will last 17 years and four months for the typical retiree.

And here's where $1 million will last much longer

On the other hand, a $1 million nest egg will serve you pretty well in Mississippi, where you'll get a good 26 years and 4 months of covered expenses out of that sum. In Arkansas, $1 million will enable the average senior to cover living expenses for 25 years and six months, and in Oklahoma, that sum will last for 25 years and two months.

If you don't mind the cold, you'll do pretty well with a $1 million savings balance in Michigan. That sum will last the typical senior for a full 25 years. The same holds true for retirees who choose to settle down in Tennessee.

Make sure your savings last

If you're intent on retiring comfortably (which you should be), there are certain steps you can take to ensure that your savings hold up, regardless of where you live. For one thing, save more. There's no rule stating that once you hit the $1 million threshold, it's time to stop, so aim to max out your IRA or 401(k) during the latter part of your working years, even if you have saved nicely to date. Those 50 and over can contribute up to $6,500 a year to an IRA and $24,500 a year to a 401(k). Max out the latter for just five years, and you'll boost your nest egg by $122,500 without factoring in investment performance.

Once you've established your nest egg, you'll want to keep it invested smartly to ensure an appropriate amount of growth during retirement. To this end, resist the urge to dump your stocks the minute you stop working. Holding stocks as a senior will allow your savings to grow even once you're no longer actively contributing, thus allowing that money to last longer.

But don't go crazy with stocks, either. If the market takes a major dip and you're forced to sell investments at a loss because you need the money, you'll risk running out of it later in life. Rather, aim for a relatively equal distribution of stocks and bonds during your earlier retirement years, and gradually shift away from stocks over time.

Finally, if you are going to retire in a more expensive state, you may need to get creative about generating extra income as a senior since your nest egg itself will only get you so far. Thankfully, you have plenty of options in this regard. You can try renting out a portion of your home, monetizing a hobby, or consulting part-time in your former field, to name just a few.

Knowing how well your savings will hold up can help you make smart decisions about where to retire. That said, don't give up on living out your dream just because your ideal locale is pricier than some of its counterparts. If you've always wanted to retire in Hawaii, you may have other means of generating income that allow you to live there comfortably, even if you've only amassed $1 million to date. The key is to be informed as well as flexible in your approach to spending and earning money.