When it comes to retirement, today's older workers unfortunately have plenty to worry about. From housing expenses to food and clothing, the prospect of retiring isn't cheap, and given the number of folks in their 50s and 60s who are behind on personal savings, it's no wonder the idea of leaving the workforce is stressful to many.

But if there's one cost you should really be worried about in retirement, it's none other than long-term care. The reason? Medicare won't pay for it. Neither will Medigap, for that matter. And if you don't come up with a plan for covering that expense in advance, you're apt to run into trouble when you're at your most vulnerable. 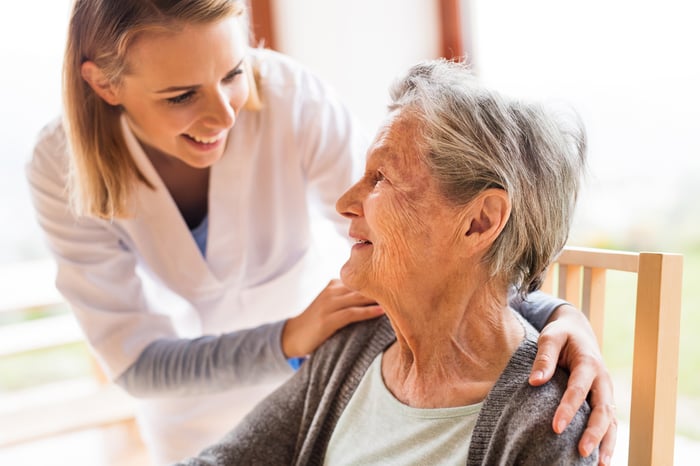 Those who aren't worried about long-term care are probably operating under the assumption that they won't need it. But in reality, 70% of seniors who reach age 65 wind up needing some type of long-term care in their lifetime. Furthermore, it's estimated that 69% of people requiring long-term care will end up needing it for three years, while 20% of today's 65-year-olds will require long-term care for a period of five years or more.

And that care doesn't tend to come cheap. A nursing home stay, for example, comes in at $82,125 a year, on average, for folks who are willing to bunk with a roommate. Private rooms, meanwhile, cost upward of $92,000 annually. And remember, these are just averages. In some areas of the country, these figures easily could be higher.

Now the good news is that most older workers are reasonably aware that long-term care can be prohibitively expensive. According to the Society of Actuaries, 68% of pre-retiree males worry about not having enough money to pay for a lengthy nursing home stay or an extended period of nursing care at home. The same holds true for 78% of pre-retiree women.

The question is: Are they taking steps to do anything about it?

Protecting yourself from one major expense

One of the scariest prospects of retirement is the financial unknowns that come with it. How much will you really end up spending on housing, food, utilities, transportation, and the like? You can do your best to estimate these and other expenses, but the reality is that living costs tend to inflate over time and historically, Social Security has done a poor job of keeping pace.

But if there's one expense you can take steps to minimize, it's long-term care, and you can do so by buying insurance when you're younger. Surprisingly, only 7.2 million Americans have long-term care insurance despite the fact that the need for it far exceeds that figure.

Of course, if long-term care insurance were cheaper, more people would buy it. The average policy costs $2,700 a year. But the savings you stand to reap down the line could be enough to more than cover that expense, especially if you wind up needing long-term care for a lengthy period of time as a senior.

Furthermore, if you apply for coverage when you're relatively young, you're more likely to snag a deal on your premiums. The American Association for Long-Term Care Insurance reports that more than 50% of long-term care insurance applicants aged 50 to 59 qualify for health-based discounts, whereas only 42% of applicants aged 60 to 69 get the same break. Wait till your 70s, and you're less likely to score a deal -- assuming you get approved at all.

Without a crystal ball, it's impossible to predict whether you'll need long-term care and how much it'll cost you. But are you really willing to take the risk?

Right now, most pre-retirees are worried about long-term care, and chances are, they're concerned for good reason. So think about getting a policy -- not just for the financial protection, but for the peace of mind you need to sleep soundly at night.