Please ensure Javascript is enabled for purposes of website accessibility
Log In Help Join The Motley Fool
Free Article Join Over 1 Million Premium Members And Get More In-Depth Stock Guidance and Research
By Maurie Backman – Apr 26, 2018 at 6:07AM

Hint: It's an unavoidable one at that.

Though we're frequently told that our expenses will go down once we retire, it's often the case that seniors end up spending more money, not less, once their careers come to a close. And a big reason boils down to one major expense: healthcare.

In fact, 44% of retirees today claim that their healthcare expenses are higher than they initially expected, according to newly released data from the Employee Benefit Research Institute. Meanwhile, 26% of retirees say the same about long-term care. 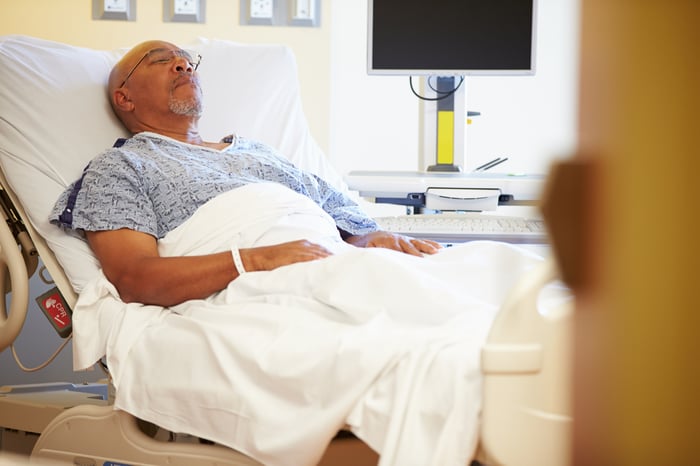 This highlights the importance of reading up on healthcare costs ahead of retirement and planning for them accordingly. But only 19% of workers and 39% of retirees say they've tried calculating their senior healthcare costs in advance. Unless you're willing to risk your future health and finances, you'll need to do your research on what senior medical care costs and save for that expense. Otherwise, you're likely to suffer at the most vulnerable time of your life.

How much will healthcare cost you as a senior?

The extent to which you'll spend money on medical care in retirement will depend heavily on your personal health. But it helps to have a ballpark estimate going in. According to HealthView Services, a cost-projection software provider, the typical 65-year-old man today who lives an average lifespan will spend $189,687 on healthcare in retirement, while the average 65-year-old woman will spend $214,565. Why the discrepancy? Women tend to live longer, so their healthcare spending is likely to exceed that of their male counterparts.

These figures, however, don't account for long-term care -- an expense 70% of seniors are likely to face. Unfortunately, those numbers are even more daunting. According to Genworth Financial's 2017 Cost of Care Survey, the average assisted living facility in the country costs $3,750 per month, or $45,000 per year. Meanwhile, the average nursing home costs $235 per day, or $85,775 per year, and that's for a semi-private room. If you want a private room, it'll cost you $267 per day, or $97.455 per year. Ouch.

Clearly, these numbers don't pain the most encouraging of pictures. But there is some good news: If you save for medical care in retirement ahead of time, you'll have an easier time footing those bills down the line. And now that you know what sort of figures you're dealing with, you can take steps to ramp up your savings game.

Saving enough to cover your needs

If the idea of spending the aforementioned sums has you spinning, remember that as long as you still have a number of working years ahead of you, you can take steps to boost your savings and avoid running into trouble later on. Currently, workers under 50 can contribute $18,500 annually to a 401(k) and $5,500 to an IRA. If you're 50 or older, you get a catch-up provision that raises these limits to $24,500 and $6,500, respectively. This means that if you're 52 with the goal of retiring at 67, maxing out your 401(k) for the next 15 years at today's limits will leave you with an additional $616,000 in your nest egg, assuming your investments generate an average annual 7% return during that period.

Of course, not everybody has the ability to max out a 401(k), but if you're able to sock away a sizable amount of money each month over a relatively long window, there's a good chance you'll manage to cover whatever health-related expenses come your way. For example, saving $600 a month over a 25-year period will give you $455,000 to work with, assuming that same 7% average annual return.

An added dose of protection

While boosting your savings is a good way to ensure that you have enough money to cover your medical spending in retirement, another way to protect yourself is to read up on what Medicare will and will not cover. Many seniors are surprised to learn that Medicare won't pay for a number of common services they utilize regularly, so knowing what to expect will at least help you plan financially for what lies ahead. Also, look into long-term care insurance while you're younger and are most likely to score a health-based discount on your premiums. Having an insurance policy to help pick up the tab could save you a fortune down the line, even when you factor in the cost of those premiums themselves.

Though there's no avoiding the costs associated with healthcare in retirement, you can ease the burden by knowing what you're getting into, saving for it, and buying insurance as needed. If anything, going in prepared will help you avoid some of the stress so many of today's seniors face, and that, in turn, could actually work wonders for your health.