Please ensure Javascript is enabled for purposes of website accessibility
Log In Help Join The Motley Fool
Free Article Join Over 1 Million Premium Members And Get More In-Depth Stock Guidance and Research
By Maurie Backman - May 1, 2018 at 6:47AM

Hint: It's an unavoidable expense.

Many of us picture retirement as a period to kick back, relax, and enjoy the freedom of not having a job to report to. Unfortunately, a large number of today's retirees aren't as content as they thought they'd be, and the reason boils down to one major factor: healthcare expenses.

According to new data from the Nationwide Retirement Institute, healthcare costs are keeping roughly a quarter of current retirees from living the lives they expected. Furthermore, 80% of seniors retired for 10 years or more say that health problems snuck up on them sooner than anticipated. Of course, there's no getting around the need to pay for healthcare in retirement, but you can do your part to ease the burden by knowing your costs in advance, buying the right insurance, and saving for the bills that lie ahead. 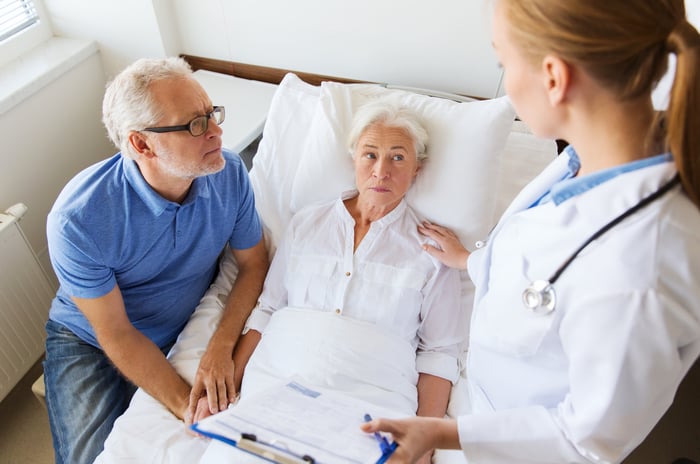 What will healthcare cost in retirement?

The amount you ultimately spend on medical care in retirement will depend on a number of factors -- primarily, your health. But according to HealthView Services, a medical cost-projection software provider, the average 65-year-old male today will spend $189,687 on healthcare in retirement, while the average 65-year-old woman will spend $214,565. And if you're wondering why women have a higher bill, it's because they tend to live longer than their male counterparts.

If you think these figures sound high, wait till you hear this: They don't even account for long-term care, which is an expense that 70% of seniors 65 and over are likely to face. And the numbers on long-term care paint an even more intimidating picture. According to Genworth Financial's 2017 Cost of Care Survey, the average assisted living facility in the country costs $3,750 per month, or $45,000 on a yearly basis. The average nursing home, meanwhile, costs $235 per day, or $85,775 per year, and that's only for a semi-private room. If you're unwilling to bunk with a roommate, you'll spend $267 per day, or $97,455 per year.

Given the number of seniors who no doubt entered retirement without having a sense of what they might spend, it's no wonder so many find themselves struggling. But now that you know what you're dealing with, you can take steps to save for the expenses you're likely to face and ease the burden when you're older.

If you're younger, and have years until you're set to retire, you can get away with contributing a modest amount to an IRA or 401(k) each month and letting it accumulate over time. For example, socking away $450 a month (which is close to maxing out an IRA if you're under 50) over a 35-year period will leave you with close to $750,000 in savings, assuming your investments generate an average annual 7% return during that time.

If you're older and don't have nearly as much time ahead of you, you'll need to do better. The good news is that workers 50 and over get higher annual contribution limits for their IRAs and 401(k)s than younger workers: $6,500 and $24,500, respectively. Max out the latter for 15 years, and you'll have about $615,000 available in retirement, assuming that same 7% average annual return. Of course, you'll need that money to cover your other expenses as well, but it'll certainly help make your medical costs more manageable.

Invest in the right coverage

While saving to pay for healthcare in retirement can help you avoid some of the stress so many of today's seniors face, another key piece of the puzzle is putting the right coverage in place. To that end, you'll need to look into the services traditional Medicare does and doesn't cover, and see if a Medicare Advantage plan is right for you. Granted, Medicare eligibility doesn't kick in until age 65, so if you're in your 30s or 40s, you probably don't need to worry about that quite yet. But if you're older, it never hurts to do some research in advance.

Furthermore, it pays to look into long-term care insurance in your 50s or 60s, when you're young enough to snag discounted lifetime premiums based on your health. Having a policy in place to help foot your long-term care bills could spell the difference between rapidly depleting your nest egg and enabling your savings to last.

Finally, read up on ways to save money on healthcare in retirement, whether it's getting ahead of medical issues before they escalate or being savvy about prescriptions. Healthcare is the one expense that's more likely than not to increase in retirement, so the more prepared you are going in, the less of a disruption it'll be to your lifestyle.