Millions of seniors rely on Social Security to pay their bills in retirement. If you're one of them, or expect to be one of them, you should know that the timing of your payments could wreak havoc on your finances once you're on a fixed income.

Social Security payments are issued on the second, third, or fourth Wednesday each month for an estimated 28 million beneficiaries. Other recipients get their money at different times during the month. But if there's a major gap between when your payments arrive and when your bills are due, you could run into financial trouble, especially if you're among the numerous seniors who count on those benefits for the bulk of their income.

And make no mistakes about it: A frightening 34% of retirees rely on Social Security to provide 90% to 100% of their monthly income, which is well beyond the 40% those benefits are designed to cover. And these are the people who are most likely to feel the effects of the aforementioned timing gap. 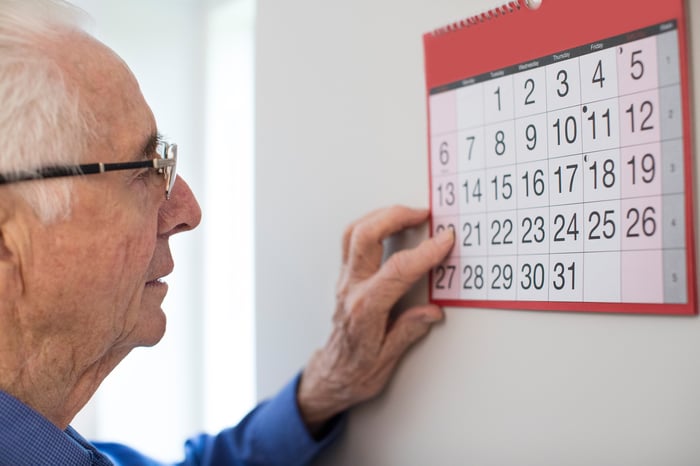 According to research from the University of Nebraska-Lincoln and the University of Illinois at Urbana-Champaign, for every one week increase in the timing between when your benefits hit your account and when your bills are due, your likelihood of not being able to pay your expenses increases by 18%. Similarly, a one-week lag has been shown to lead to 42% more bounced checks, 37% more online payday loans, and 13% more overdrafts -- and all because far too many seniors lack the financial cushion they're supposed to have.

If you're currently stuck in a situation where you're struggling to pay the bills, it's time to make changes so you don't wind up ruining your finances irreparably. Similarly, if you're approaching retirement with minimal savings, it pays to work a bit longer and build yourself a safety net. It's a far better bet than walking around perpetually cash-strapped as a senior and being miserable for it.

If you're already retired and receiving Social Security, you generally don't have the ability to change the date on which your payments arrive each month. What you can do, however, is alter the timing of your bills to better correspond to the dates your benefits come in. For example, if you call your credit card company and ask for a new billing cycle, there's a good chance it will comply. You may have a harder time getting your mortgage or auto lender to do the same, but it's also worth a shot.

Imagine your credit card is currently due the second week of the month, but your Social Security payments don't arrive for another several days. Without savings to tap, you're going to have a shortfall. But if you request that your credit card issuer change your terms so that your bills come due the third week of the month instead of the second, you won't run into that same problem.

Go into retirement with savings

If you're not yet retired but are getting close, and you know your savings are virtually nonexistent, do yourself a favor and work a bit longer to establish an emergency fund. This way, if you do experience a gap between when your Social Security payments hit your account and when your bills come due, you'll have reserves to dip into. Then, when you get your benefits, you simply replenish and repeat as needed. Of course, in an ideal world, you'd postpone retirement and build a respectable nest egg, but if that's not an option, then going in with some savings is better than nothing.

Remember, the last thing you want is to rack up debt as a senior, which is more likely to happen if you can't pay your bills on time. If you do land in debt, you not only waste money on interest at a time in your life when you don't have much financial flexibility, but you also risk taking that debt with you to the grave. That's why you need at least a small amount of savings before saying goodbye to your regular paycheck.

Finally, if you don't have much savings to work with, aim to live below your means to the greatest extent possible in retirement. This way, your Social Security payments aren't already spent before they even arrive.