Given that healthcare is one of the most sizable expenses today's workers face, you'd think more employees would be willing to sacrifice a bit of money in exchange for better benefits. But this isn't the case. Only 38% of workers today are willing to pay extra each month for a more comprehensive health insurance plan, according to a recent survey by Willis Towers Watson. By contrast, 66% of workers say they're willing to pay more each month for better retirement benefits.

Surprisingly, 66% of workers feel that their health plan meets their needs. But that still means one-third of U.S. employees aren't happy with their level of coverage. If your employer offers you the option of a better health plan, albeit at a cost, you may want to think twice before passing up that opportunity. It's often the case that paying a little more for health coverage saves you money on a whole. 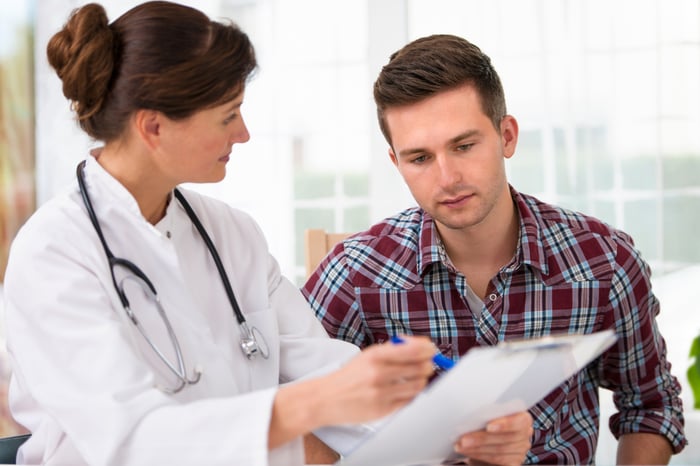 Why pay more for health insurance?

So why on earth would you be willing to forgo more of your paycheck for a new and improved health plan? It's simple: You might still come out ahead financially.

When it comes to health insurance, you tend to get what you pay for. A cheaper plan might save you money on premium costs, but when you factor in expenses like deductibles, copays, and your coverage itself, you might easily end up spending more in total when you stick with a lower-cost plan.

Imagine your employer's current plan costs you just $100 a month toward your premiums, but it also comes with a $4,000 deductible before your insurer will start covering your services. If you never get hurt or sick and therefore don't wind up paying into that deductible, you'll spend just $1,200 over the course of a year. But what happens when you land in the hospital and rack up $4,000 in charges? Suddenly, you're on the hook for that money, which, coupled with your premiums, brings your total spending to $5,200 for the year.

Now let's imagine your employer offers you the option to buy into a better plan. This time, you'll be on the hook for a $150 monthly premium, but just a $1,000 deductible. If you end up in the aforementioned scenario, you won't need to shell out $4,000 up front, but rather, just $1,000. That, plus your total premiums for the year, brings your total to $2,800. Even if we apply an additional $200 copay (keeping in mind that once your deductible is met, you're still liable for copays), that's still $2,200 in savings from the former scenario.

Medical debt is currently the most common source of bankruptcy filings in the country, and it's not just the uninsured who tend to fall victim. Each year, countless Americans wind up in medical debt even when they have insurance. Having a more comprehensive plan lowers your chances of getting hit with an unexpected bill because your insurer won't cover the service or procedure in question.

Furthermore, if the idea of paying extra for better health insurance doesn't sit right with you, try asking your employer what percentage of that increase it will be absorbing. If you're being asked to spend another $30 per paycheck for superior coverage, chances are, your employer is spending an extra $60 or more -- so that's something to think about.

Either way, don't be unwilling to pay for a better health plan until you really get a chance to understand the total costs and savings you're looking at. In a day and age when so many companies are stingy with benefits, the last thing you want to do is pass up the chance to snag a health plan that's superior to the one you already have.