No matter what sort of lifestyle you lead, retirement is an expensive prospect. And while you can cut back on certain expenses like housing and leisure when circumstances require you to do so, there's one expense you may not have a choice about: long-term care. And unfortunately, new data from the Society of Actuaries shows that Americans still aren't preparing for it as they should be.

In a recent study of retirees 85 and older, most respondents who have not yet needed long-term care expect that if they do, they'll get by with the help of paid home aides and family support. Most of those who are currently getting long-term care, however, have had no choice but to pack up and move to nursing homes or assisted living facilities, thus significantly adding to their costs. 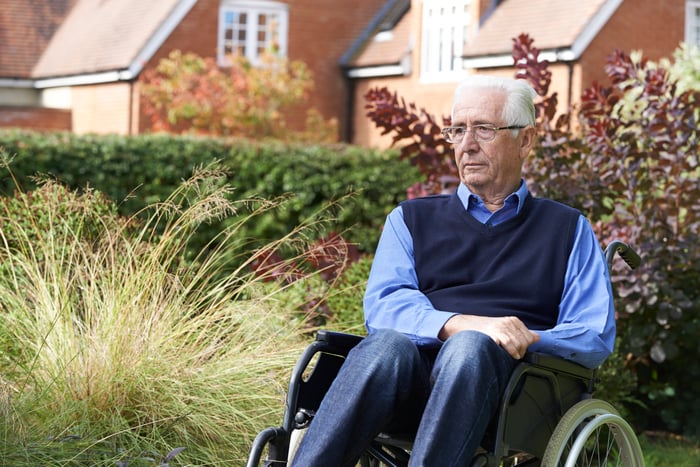 The study also underscores the importance of having a financial backup plan for those who don't have family to rely on to provide elder care. Currently, 32% of seniors 85 and over receive logistical support from family members with regard to physical activities such as transportation, meals, and household chores. To hire a home aide to provide those services, however, is an expense many seniors are in no position to bear.

If your goal is to maintain a level of financial security throughout retirement, then you'll need to not only assume you'll require long-term care at some point in time, but also save and plan for it. Otherwise, the latter end of your senior years might end up being more stressful than you ever could've bargained for.

It's easy to think of long-term care as somebody else's problem, but in reality, 70% of seniors 65 and over end up needing some type of long-term care in their lifetime. Among those, 69% end up requiring that care for a three-year period or longer.

And if you're counting on Medicare to pick up the tab, you're out of luck. The average Medicare-covered stay in a nursing home is a mere 22 days. That's a meaningless tally in the grand scheme of a three-year period or more.

So how much might an extended stay at an assisted living facility or nursing home cost you? Probably more than you'd think. The average assisted living facility in the country costs $3,750 per month, or $45,000 per year, according to Genworth Financial's 2017 Cost of Care Survey. The average nursing home, meanwhile, costs $235 per day, or $85,775 per year, for a semi-private room. Want your own room? It'll set you back $267 per day, or $97,455 per year.

Even if you don't require a nursing home or assisted living facility in your lifetime, there's a good chance you'll reach a point when you just plain need help functioning independently. And if you don't have family around to assist, you're going to have to pay for that help. Currently, the average cost of a non-medical home aide is $21 per hour. This means that if you wind up needing assistance for 10 hours a week, you're looking at close to $11,000 per year.

All of this means one thing: You should be saving for these eventual costs during your working years rather than assuming you'll cut corners to pay for them later on. And the sooner you do, the more secure you'll be going into retirement.

The good news? If you still have a number of working years ahead of you, boosting your savings rate modestly could increase your nest egg substantially. For example, socking away an additional $250 a month on top of what you're already saving for the next 20 years will give you an extra $123,000 in retirement, assuming your investments generate an average annual 7% return during that time. (That's more than doable with a stock-heavy portfolio, by the way.) That's enough to cover an assisted living facility for almost three years.

Another option? Look into long-term care insurance. The younger you are, the more likely you are to not only get approved for a policy, but also snag a health-based discount on your premiums. Having that insurance to defray the cost of long-term care could lift a major burden when you're older and at your most vulnerable.

Finally, if you're counting on family to provide any type of care or support when you're older, have that conversation in advance rather than assume that help will be a given. You never know when your adult children might choose to pick up and relocate abroad or when a stay-at-home adult child of yours might opt to go back to work. Knowing what to expect assistance-wise will help you avoid a potential financial shock (not to mention an emotional one) down the line.