Please ensure Javascript is enabled for purposes of website accessibility
Log In Help Join The Motley Fool
Free Article Join Over 1 Million Premium Members And Get More In-Depth Stock Guidance and Research
By Maurie Backman – Jun 27, 2018 at 6:04AM

It's a legitimate concern. The question is: What will you do about it?

Though retirement is a period many workers look forward to, it's a worrisome milestone in many regards -- and healthcare is no exception. The combination of moving from a group employer plan to Medicare and from a steady paycheck to a fixed income is enough to make even well-to-do seniors question their personal financial outlook.

In fact, 73% of wealthy older adults say that out-of-control healthcare costs rank highly among their greatest retirement-related fears. That's the latest from a Nationwide Retirement Institute study, which also found that 53% of well-off older Americans don't know how to estimate their annual medical costs.

Of course, not knowing what to expect expensewise can clearly make for a stressful situation. So if you're eager to minimize some of that anxiety, it pays to read up on healthcare costs in retirement and save for them accordingly. 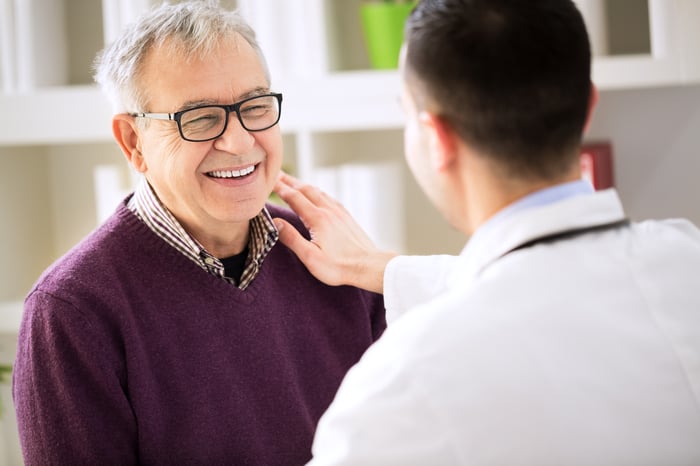 What will you spend on healthcare in retirement?

Meanwhile, the typical retirement in the U.S. spans an 18-year period, according to the Bureau of Labor Statistics. Therefore, if we divide the aforementioned figures by 18, we arrive at $10,538 a year in medical spending for men and $11,920 a year for women.

Of course, this is an imperfect calculation because the main reason women are expected to spend more than men on healthcare in retirement is that they typically live longer. Our figures, meanwhile, assume an 18-year retirement across the board. Still, they should help shed some light on what healthcare might cost for the typical senior.

What's interesting is that in the above-referenced study, respondents estimated their own annual healthcare costs at $8,800 and their spouses' costs at $14,000. When we add up both sets of figures, we arrive at roughly the same total, which means that those surveyed actually have a pretty good sense of what they'll spend on medical care.

The projections above from HealthView, however, do not include long-term care costs, and those can be astronomical. The average assisted living facility in the country, for instance, costs $45,000 per year, according to Genworth Financial's 2017 Cost of Care Survey, while the average nursing home costs $85,775 per year for a shared room and $97,455 per year for a private one. And those are some daunting numbers indeed, especially when we consider that 70% of seniors 65 and over will wind up needing some type of long-term care in their lifetime.

Saving to pay for your medical needs

The above figures underscore the importance of saving to cover your healthcare costs in retirement, so if you're behind in that regard, it's time to ramp up. The good news is that if you're 50 or over, you get to contribute up to $24,500 annually to a 401(k) or $6,500 to an IRA. If you max out the former for 17 years, you'll wind up with $755,000 on top of what you already have saved, assuming your investments generate an average annual 7% return during that time.

But saving money isn't the only thing you should do to address the giant expense that is healthcare in retirement. You also should read up on what Medicare will and will not cover to determine whether it pays for you to buy supplemental insurance or enroll in a Medicare Advantage plan. It also pays to look into long-term care insurance during your 50s or 60s, and the earlier you do, the more likely you are to not only get approved, but snag a discount on your premiums. Having a policy to defray the aforementioned costs could spell the difference between managing those expenses and having them ruin you financially.

Whether you're wealthy or not, healthcare in retirement is something that should be on your radar, especially as your career draws closer to an end. Read up on the costs you'll be facing, get the right insurance, and save as best as you can. That way, you'll be ready for whatever expenses inevitably lie ahead.