There's a lot of uncertainty surrounding the future of Social Security, so much so that countless Americans are wondering whether the program is headed toward bankruptcy. And while that certainly poses a problem for current and near-retirees, it puts younger workers in a tough spot as well.

And make no mistake about it: Millennials are by no means confident in Social Security's ability to sustain them in the future. In fact, in a recent Gallup poll, 33% of millennials said they're worried benefits won't be around for them in retirement. The question is: Are they right? 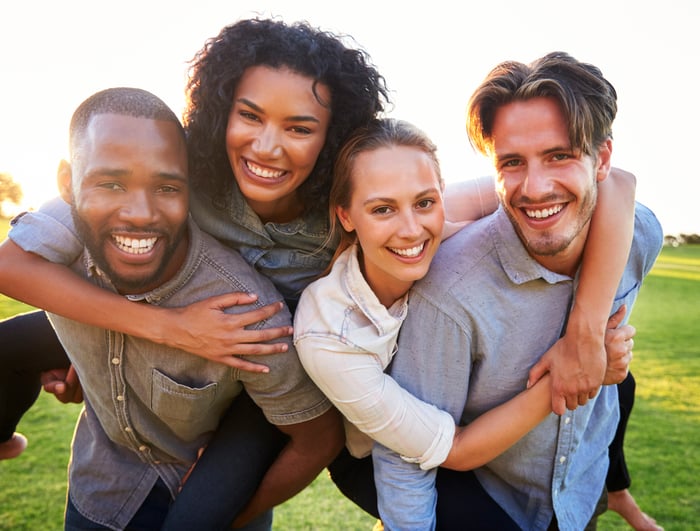 It's easy to see why so many Americans are concerned about Social Security. The program is facing a multitrillion-dollar shortfall that could impact benefits if Congress doesn't step in with a fix. But while the latest Trustees Report doesn't exactly paint a glorious picture for Social Security, the news isn't all bleak, either.

Right now, the worst-case scenario for Social Security looks something like this: If lawmakers don't intervene, the program will exhaust its trust funds by 2034, at which point it will have no choice but to cut scheduled benefits by up to 21%. This means that future recipients, millennials included, stand to collect smaller payments than what they'd normally be entitled to.

Still, 79% of scheduled benefits is far better than getting no benefits at all, and right now, that's what we're looking at. Remember, Social Security gets its funding from payroll taxes -- as in, those taxes we like to complain about, but which also serve the very important purpose of keeping the program afloat. As long as we uphold this practice, we'll have money coming into the system, which means millennials will have some Social Security income to look forward to in the future.

Even though it doesn't look like Social Security is going away, younger workers should not make the mistake of relying on those benefits in any way, shape, or form. Even in a best-case scenario -- meaning, no 21% cut as mentioned above -- Social Security is only designed to replace about 40% of the average worker's pre-retirement income. Most seniors, however, need roughly twice that amount to live comfortably. Also, Social Security will replace an even lower percentage of income for higher earners, which means anyone who does well in his or her career can rely even less on those benefits.

Not only that, but Social Security, at least in recent years, has done a very poor job of keeping up with seniors' spending needs. Though the program is supposed to give beneficiaries cost-of-living adjustments (COLAs) to ensure that they maintain their buying power in the face of inflation, recent COLAs have been far from generous. Besides, they often get swallowed up by Medicare premium increases anyway.

All of this means one thing: Regardless of what happens to Social Security in the future, it's on us, as workers, to save independently for our golden years, and that includes millennials. But considering only 38% of younger workers are saving for retirement, the overall picture for millennials doesn't look promising at present.

The good news, however, is that millennials, regardless of their current earnings or savings level, have an extremely powerful weapon in their arsenal: time. That means those who start saving for retirement right away have a solid opportunity to accumulate wealth and buy themselves the option to forget about Social Security altogether.

Check out the following table, which shows how much wealth a millennial with a 40-year savings window might accumulate:

Keep in mind that those figures all assume an average annual 7% return on investment, which is more than doable with a stock-focused portfolio. In fact, younger workers are in a great position to load up stocks since they have time to ride out the market's ups and downs.

While Social Security will, in all likelihood, be around for millennials, it probably won't do a great job of sustaining them during retirement. And the sooner more younger workers ramp up their savings efforts to compensate, the less stressed they'll need to be about that.

Will Social Security Be Around for Millennials? @themotleyfool #stocks Next Article
Current