College students who rack up piles of debt face certain repercussions later in life. Studies have shown that student loans can seriously hinder retirement savings, and large levels of debt have also prompted countless young adults to put off homeownership. There's even data out there supporting the fact that student debt is bad for your health.

But here's a new reason to be wary of student loans: They could increase your likelihood of getting divorced. In fact, 13% of divorced couples say that student loans were what ended their marriage, according to a new report by Student Loan Hero. 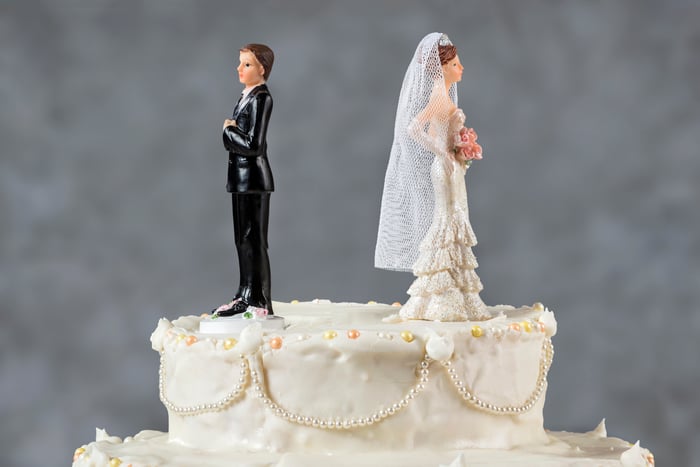 And it makes sense. Money problems have long been a driver of divorce, and because student debt can constitute a major financial strain, it stands to reason that it has the power to negatively impact a marriage. Still, this data paints a pretty scary picture and underscores the importance of keeping student debt to a minimum and learning to manage it after the fact.

To somehow manage to graduate college without any amount of student debt takes careful planning or some very generous parents. But there's a difference between racking up a moderate amount of debt and an excessive amount, and unfortunately, a large number of students each year go the latter route. In fact, the average Class of 2017 graduate came away $39,400 in the hole, and that represents a 6% climb from just the previous year. All told, Americans owe $1.48 trillion in loans, and it's clearly taking a toll not just on their finances, but their marriages.

If you're in the process of getting your degree, it pays to keep your borrowing to a minimum, whether that means spending your first two years at community college to save on tuition, accelerating your studies to graduate early, or living at home and commuting to school to avoid having to dorm. Limiting yourself to federal student loans is another good way to keep your debt in check, since federal loans come with a borrowing cap that private loans don't. Not only that, but federal loans are regulated so that their interest rates aren't excessive; private lenders can charge what they want, which could raise your monthly payments substantially.

Getting a handle on your existing debt

If you're already on the hook for a mountain of student loans, you obviously can't go back in time and un-borrow that money. But you can do your best to manage that debt so it doesn't impact your finances (and, eventually, your marriage).

For one thing, look into refinancing if you're paying a high interest rate on your loans. If you're able to snag a lower interest rate, you could shave a nice portion off of your monthly payments.

If you took out federal loans for college, you can also see about getting onto an income-based repayment plan. These plans are designed to help borrowers better keep up with their monthly payments, though be warned that private lenders typically don't offer them.

Another option? Get yourself a side hustle. The beauty of getting a second gig on top of your primary one is that the money you earn shouldn't be earmarked for anything specific. As such, you should have no problem using it to not only make your monthly loan payments, but pay down more of your balance so you knock out that debt more quickly.

Finally, be open with your partner about the level of student debt you're bringing into the relationship. Keeping financial secrets is a good way to wreck a marriage, so be clear about what you owe and how you're planning to pay it back.

Being married isn't easy to begin with. Throw student loans into the mix, and if you're not careful, it could be a recipe for disaster. So be smart about borrowing while pursuing your studies and stay on top of your debt once you graduate. With any luck, your student loans won't impact your relationship -- just your bank account.