Most Americans spend down their earnings month after month. Here's how to put an end to the madness.

You've probably heard of living paycheck to paycheck, but you might not realize how common this practice is. So here's a news flash: An estimated 75% of adults live paycheck to paycheck, and it's not just lower earners we're talking about. Rather, 1 in 10 Americans earning more than $100,000 a year also lives this way even though that sort of income should, in theory, buy folks a bit more breathing room.

Of course, the problem with the paycheck-to-paycheck lifestyle is that the moment an unplanned expense sneaks up on you, or your hours are cut, or you lose your job completely, you risk falling behind on your bills, thereby kick-starting a dangerous cycle of costly, credit-zapping debt. And it can be bad for your health, especially if financial worries cause you undue stress and keep you up at night. 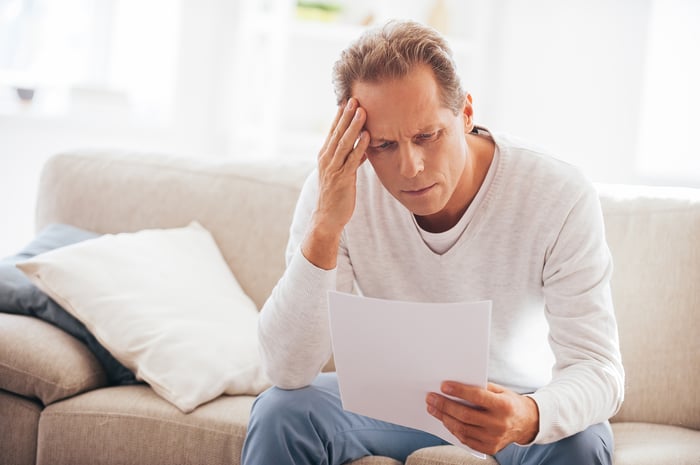 Here's how to kick the paycheck-to-paycheck habit and adopt a healthier approach to money management:

Most Americans don't follow a budget even though it's one of the most effective means of tracking spending. If you want to stop living paycheck to paycheck, the first step in the process is to create a budget that maps out your expenses so you can see how much you spend each month, and where. You'll probably find that your monthly bills eat up your entire paycheck. But once you have that budget in place, you'll be better positioned to start cutting corners to free up cash each month.

Imagine you spend $250 a month on your car payment, $120 on cable, and $200 on concerts and events. Since you need your car to get around, slashing that expense might not be an option. But that doesn't mean the other two bills don't offer some wiggle room. You might choose to cancel your cable plan, or downgrade to a lower package. Or you can reduce your leisure spending to $100 a month rather than spend an extra $100 you should be saving instead. There are plenty of options, but the point is to understand where your money goes and what to do about it.

Ideally, you should get into the habit of setting aside 15% to 20% of each paycheck for the future rather than spending all of it on living expenses. But before you can even begin to save for the long haul, you'll need to build some cash reserves so you're covered in case of an unforeseen bill. And that's where your emergency fund comes in.

Generally speaking, your emergency savings should be enough to cover anywhere from three to six months' worth of living expenses. Once you have your budget in place, you can see how much you spend each month, multiply that figure by any number between three and six, and arrive at your savings target. From there, it's a matter of banking the money you don't spend month after month until your emergency fund is complete.

One reason so many people max out their paychecks is that they lock themselves into fixed expenses that eat up too much of their earnings. Then, when other bills inevitably rise over time, they have little ability to keep up.

If you're serious about breaking the month-to-month cycle, it pays to lower the one expense that most likely exceeds all others: housing. As a general rule, you should never spend more than 30% of your net monthly income on housing -- and by "housing," we mean your rent or mortgage payment, homeowners' or renters' insurance, and property taxes (if applicable). If you're exceeding that threshold, consider downsizing or relocating to stop being trapped in the position of not being able to pay your bills until your next paycheck arrives.

Living from month to month is downright dangerous. Follow these steps, and with any luck, you'll break that unhealthy cycle to arrive at a much more financially stable place.