It's hard to focus on retirement when you're decades away, which perhaps explains why so many younger workers neglect their nest eggs in favor of more pressing goals, like paying off their student debt or saving for a down payment on a home. The problem, though, is that delaying savings means losing out on years of compounding, and that's a costly mistake you might permanently struggle to recover from.

Unfortunately, nearly 52% of millennials aren't contributing to retirement accounts, according to data compiled by Money Under 30, and as such, they're putting themselves at risk of falling short later on. The good news, though, is that if they change their ways soon, they have ample opportunity to catch up. 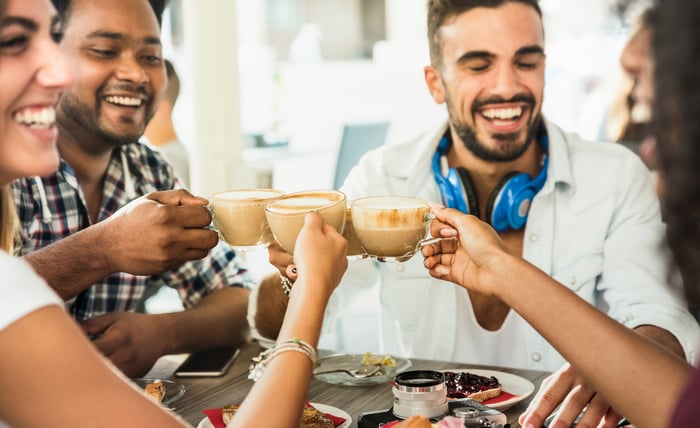 Time is still on your side

The more time you give your money to grow, the more wealth you'll accumulate without having to do anything other than sit back and watch your investments work their magic. Check out the following table, which further illustrates this point:

As you can see, giving yourself a 45-year savings window will allow you to turn a total of $216,000 in out-of-pocket retirement plan contributions into a rather impressive $1.37 million. That's more than a $1 million gain.

There are a few things that help make this possible in addition to time. First, there's that 7% return -- a number that's more than doable if you invest your retirement savings heavily in stocks, seeing as how it's a few percentage points below the stock market's average. But the more conservative you are, the lower that return is likely to be.

Additionally, the above table assumes that you're contributing to some type of tax-advantaged retirement plan, whether it's an IRA or 401(k). The great thing about these plans is that they allow your money to grow on a tax-deferred (for a traditional account) or tax-free (for a Roth account) basis.

If you choose to save in a Roth account, your withdrawals will be tax free in retirement. If you save in a traditional IRA or 401(k), you'll be taxed on those retirement withdrawals, but you won't pay taxes on your investment gains year after year. As such, you'll have the opportunity to reinvest that money to accumulate -- you guessed it -- even more wealth. The longer you wait to start saving, however, the lower your lifetime gains will be unless you increase your monthly contributions later in life -- something you might struggle to do when you're older as other expenses, like paying for your own kids' college, start to eat up more of your income.

Though retirement might seem like a far-off milestone that doesn't warrant much of your brain space, the reality is that waiting to save for it could put you in a precarious financial position down the road. So don't make that mistake. Workers under 50 can contribute up to $18,500 each year to a 401(k) and $5,500 a year to an IRA. Even if you can't max out these limits (or even get close), be sure to start saving something. The sooner you do, the greater your chances of getting to retire when you want to.