A hearty, home-cooked meal is more affordable than you'd think.

Thanksgiving is a time to not only be grateful, but, for some of us, to stuff our faces till our stomachs can no longer accommodate. It's natural (and even fun) to indulge on this holiday of gratitude, and the good news is that if you cook your meal at home, you can do so quite economically. In fact, this year, the average Thanksgiving dinner will cost $48.90, according to the American Farm Bureau Federation. That figure, however, accounts for well more than just turkey. 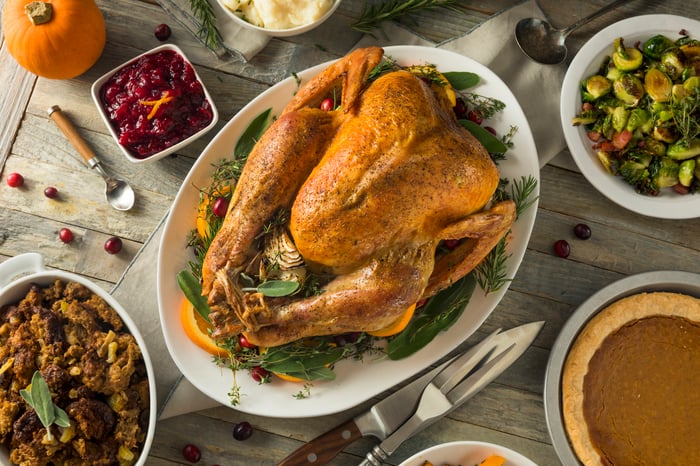 Of course, many of us will wind up spending well more than $48.90. This especially holds true if you're planning on a bigger spread, have a large number of guests coming, or intend to serve alcohol, which could double your costs by itself. Still, the fact that it's possible to pull off an impressive meal at what might easily amount to a mere $5 per person underscores the benefits of cooking at home and avoiding the whopping expense that is dining out. And the sooner more Americans get on board with the idea of making their own meals, the more money they stand to save.

How much can you save by preparing your own food?

It's said that food establishments, from fine dining restaurants to casual takeout spots, charge at least a 300% markup on the items they serve. This means that if you spend $20 on food prepared outside your home, you can usually make the same dish yourself for closer to $5. Of course, there are exceptions to this formula, but generally speaking, you'll pay substantially more for the convenience of having somebody else do the prep work, cooking, and cleanup.

Now, if you're doing well savings-wise and enjoy eating out, then there's no particular reason to start cutting back on restaurant and takeout meals. But if you're behind on near-term savings, food prepared outside of your home is one of the easiest expenses to cut back on, since you have the option to cook yourself.

How much might you save by skipping restaurant meals? The following table will give you an idea:

Now, to be fair, these numbers assume that you'll go from spending anywhere from $100 to $400 a month on restaurant food to not dining out at all. And frankly, that's probably a bit unrealistic. The point, however, is that if you're willing to cut back on this one expense, you can improve your financial situation significantly.

Besides, think about it this way: Cooking at home is generally much healthier than dining out, so if you get into that habit, you'll not only avoid overspending, but possibly get healthier.