Though they say 40 is the new 30, it's still a good time to take stock of your finances and make sure they're reasonably on track. Here are three milestones you should aim to reach by the time your 40th birthday rolls around.

1. Have three months of living expenses in the bank

It's one thing to run into an unplanned bill in your early 20s and have no choice but to charge it to a credit card in the absence of having the cash on hand. By the time you turn 40, though, you can no longer use that entry-level salary or mountain of student debt as an excuse for not having emergency cash, so if you're nearing that age, make sure you have at least three months' worth of living expenses in the bank. That cash can then tide you over if you lose your job, or help you pay for an unanticipated car or home repair that your regular paycheck just can't cover. 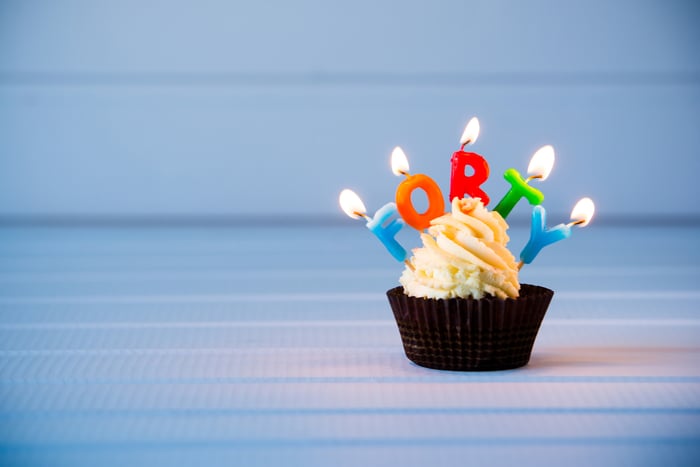 If you don't have anywhere close to three months' worth of living expenses in the bank, cut corners in your budget, at least temporarily, to free up some cash. At the same time, be sure to send any bonus money you receive (think commissions or tax refunds) directly into your bank account until your savings are at a healthier level. You might even consider getting a side hustle to drum up that extra cash, especially if you're starting with little to nothing.

2. Have three times your salary in a retirement account

There's no hard and fast rule stating that you must have a certain amount of money in your 401(k) or IRA by age 40 -- your personal savings target should be a function of your income rather than a preset number, like, say, $200,000. That said, investment giant Fidelity recommends having three times your current salary socked away by the time you turn 40, which means that if you've hit that milestone and earn $65,000, you should ideally have $195,000 in your retirement account. So if you're nowhere close, consider it a wake-up call to do better.

As is the case with building emergency savings, establishing a solid nest egg often boils down to making lifestyle choices, and if you're willing to cut back on some expenses, it'll free up money for your IRA or 401(k). Along these lines, if you get a raise at work and have access to a 401(k), direct your employer to send that extra money directly into that account so that you don't have a chance to spend it elsewhere. And if you're really behind on long-term savings, you could always get a second job and use its proceeds to pad your retirement account -- something that 14% of workers do with their side income.

To be completely debt-free by age 40 is easier said than done, especially if you own a home and therefore have a mortgage. But there's a difference between healthy debt and unhealthy debt, and if you're carrying debt of the credit card variety, you're automatically in the not-so-desirable latter category.

If that's the case, you'll want to pay off that bad debt as soon as possible, and for a few reasons. First, the sooner you get out of credit card debt, the less money you'll throw out on interest. Secondly, not having monthly debt payments to contend with will allow you to use the money you otherwise would've spent for other goals, like retirement or perhaps a college fund for your children.

Once again, you'll find that cutting corners in your budget works wonders to free up cash that can be used to pay down debt. You can also try transferring your existing credit card debt to a new card with a lower interest rate, thereby reducing your monthly payments and making them easier to knock out quickly. And there's nothing like extra income from a second job to help whittle an obnoxious balance down to nothing.

Let's face it: By age 40, you should really have your financial house in order, and that means establishing a solid emergency fund, having a healthy nest egg, and eliminating bad debt. Achieve these goals, and you'll have something major to celebrate when that big birthday rolls around.