Please ensure Javascript is enabled for purposes of website accessibility
Log In Help Join The Motley Fool
Free Article Join Over 1 Million Premium Members And Get More In-Depth Stock Guidance and Research
By Maurie Backman - Dec 21, 2018 at 6:18AM

Being an investor during a down market can be demoralizing to say the least. December has been a brutal month for stocks, and there were several instances over the past few weeks where I had to talk friends off the ledge and convince them not to panic over the recent downturn. But as I heard myself saying things like "Don't worry, things will turn around," a big part of me felt like nothing more than a glaring hypocrite.

See, I haven't been panicking over the past few days or weeks, but I have been growing increasingly dejected about the fact that my portfolio has lost about $40,000 in value since its high earlier this year. After all, I work hard to earn and save money, and so to "lose" $40,000 to market volatility is a major bummer, to put it lightly. 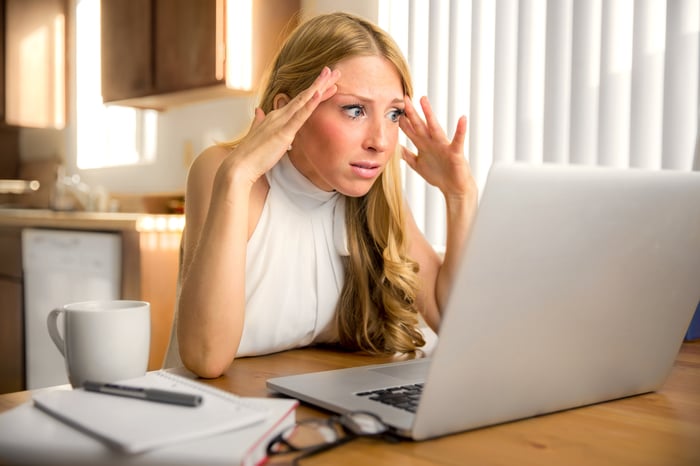 HOW MUCH WORSE CAN IT GET? IMAGE SOURCE: GETTY IMAGES.

But whenever I start thinking that way, the logical part of my brain kicks in, and I remind myself that since I haven't sold off any of my positions, I haven't actually lost a dime. If you're similarly bemoaning the fact that stocks are in a serious slump, here are a few tips for coping.

When you sell investments at a price that's lower than what you paid for them, you lose money. It's that simple. But if you ride out the storm, there's a good chance the market will come back up, and you'll be made whole again on paper (or on screen). So tempting as it might be to liquidate your various holdings for fear that things will get even worse in the coming weeks or months (which they very well might), resist the urge unless you absolutely need money and don't have another place to get it from.

And if you are forced to sell some investments, choose those that have been underperforming more so than their counterparts, or whose long-term viability is questionable. For example, if you're invested in a company that just released poor earnings and analysts think its outlook is negative, you're probably better off unloading its stock than selling off stock from a company that's a victim of general market conditions.

As my colleague and market expert Sean Williams recently reported, market corrections happen all the time. Since 1950, there have been 37 distinct corrections in the S&P 500 that produced at least a 10% decline from recent highs. Furthermore, the average length of a stock market correction (not including the one we're currently experiencing) is 196 days, which isn't all that long when you're investing over a 10-, 20-, or 30-year period. And of the 36 corrections the market has endured (I'm not counting the current one, since it's still in full swing), 22 have resolved in 104 or fewer days.

Therefore, we might be looking at a very different market by the midpoint of 2019. And even if we aren't, know that the market has a tendency to climb over time, so if you're patient, you stand to not only recover from the horrendous month we've been having but come out ahead.

This is one of those pieces of advice that I really need to follow myself. When there's nothing but negative market news hitting the wire, resist the urge to log on to your brokerage account and see how your investments are faring. Chances are, they're either somewhat down, moderately down, or really down, and it probably doesn't matter immediately where on that spectrum they fall. Checking your balance constantly during an ongoing period of volatility is apt to pour salt on an already painful wound, so it makes little sense to put yourself through that torture.

Along these lines, don't rush to check your balance the minute there's a touch of positive news. Unless you're talking about a major rally, you probably still won't like what you see. Rather, wait for an extended upswing before you access that balance to see how it's fared.

It's hard not to feel bad about your finances when the stock market is in the dumps and your portfolio is dragged down with it. But remember, if you're patient, statistically speaking, things are far more likely than not to work out in the end. In the meantime, stop looking at your portfolio. Take it from someone who's been tormenting herself daily and is finally putting a stop to the madness.