It's no secret that without Social Security, many seniors would have a much harder time paying their bills. And data from the Center on Budget and Policy Priorities, a think tank, shows that those benefits serve the important purpose of keeping 30% of elderly Americans out of poverty.

All told, 15.3 million seniors live above the poverty line thanks to Social Security income, which means that benefit cuts could be catastrophic.

Unfortunately, those cuts are very much a possibility. Social Security's trust funds are expected to run dry in 2034. Once that happens, the program might be forced to cut benefits by as much as 21% if Congress doesn't step in with a fix. That sort of reduction, however, could have severe consequences for the more than 15 million seniors who are currently spared the impoverished lifestyle they would otherwise face. 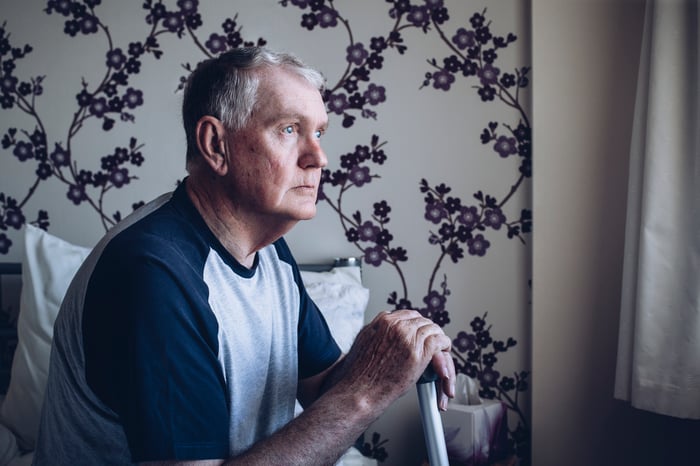 Future retirees are in jeopardy as well, particularly the 42% of today's workers with less than $10,000 set aside for the future. But while it may be too late for low-income seniors to change their fate, those who are still working can take steps to avoid landing in poverty, even if Social Security does end up getting slashed.

Many working folks assume that once they retire, their Social Security benefits will cover all of their bills. Well, they're wrong. In a best-case scenario -- meaning, no future cuts -- those benefits will replace about 40% of the average earner's pre-retirement income.

Most seniors, meanwhile, need roughly double that to live comfortably. In fact, Social Security, at its core, is really just a means of poverty protection. And if you want to maintain the lifestyle you became used to during your working years, you'll need retirement income outside of those benefits.

So it's crucial to set a portion of your income aside for your golden years. As a general rule, saving anywhere from 15% to 20% of each paycheck is a good way to ensure that you can live the way you want to in retirement. But for some folks, that's just not feasible.

That said, saving 3%, 5%, or 7% of your income is far better than nothing at all. And the sooner you start building your retirement fund, the more comfortable a lifestyle you'll buy yourself down the line.

Check out the following table, which shows how much you might retire with, depending on your monthly savings contribution:

That 8%, by the way, is just below the stock market's average. When you save in an IRA or 401(k), you get the option on where to invest it, and if you go heavy on stocks, you might very well score that sort of return or higher over a long-term investment window.

Now clearly, saving $500 a month will give you a much more sizable nest egg than you'll get by setting aside just $100 or $200 a month. At the same time, any effort you make will go a long way, so if you're not already in the habit of saving steadily, make some lifestyle changes that allow you to free up cash. That could mean downsizing your living space, cooking at home instead of dining out, or canceling your cable plan and gym membership.

At the same time, take steps to boost your income. Grow your skills so you're eligible for a raise, or get a side job if your current paycheck doesn't offer much room for savings.

Like it or not, you'll need income outside of Social Security if you want to enjoy some of life's luxuries (small or otherwise) as a senior. And if those benefits eventually get cut, you'll especially need money of your own to avoid landing below the poverty threshold. So don't wait -- the sooner you take steps to build savings, the greater your chances of avoiding the financial struggles so many of today's seniors face.