Don't let that debt drag on. Get rid of it quickly with these tips.

Though the holidays are often hailed as the most wonderful time of the year, they're also frequently the most expensive. It's not surprising, then, that the average American racked up $1,054 in debt during the 2017 holiday season. But what's perhaps even more disturbing is the fact that as of late November 2018, a good 15% were still paying off the previous year's debt.

If you closed out the 2018 holidays with a series of outstanding credit card balances, it's time to attack the problem head-on. Otherwise, you'll risk carrying that debt with you for the rest of the current year, or even beyond. Here's how to pay off that pesky debt and clear your slate as quickly as possible: 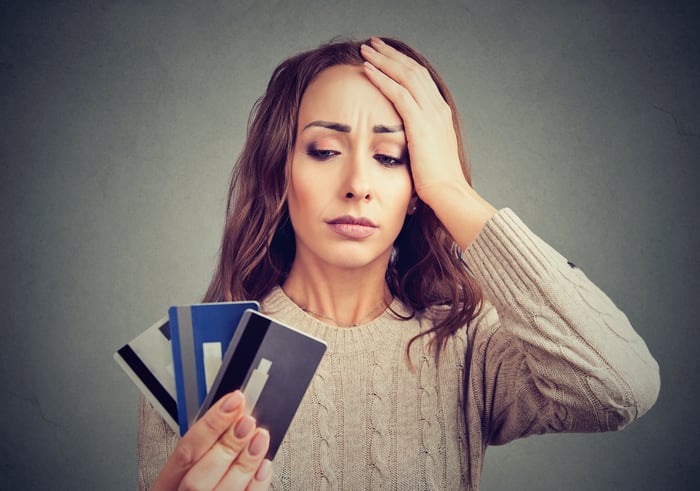 1. Figure out which debts are costing you the most

To start eliminating your holiday debt, figure out not just how much you owe in total, but which specific debts are costing you the most. For example, if you racked up $200 on a store credit card charging you 24% interest, it makes sense to tackle that balance before working on the $500 you owe on a card charging just 18% ("just" being a relative term here). So examine your debts, order them by highest to lowest interest, and move down that line in your payoff efforts.

2. Look into a balance transfer

The less interest you have to pay on your debt, the less money you stand to lose, and the easier it'll be to dig out of that hole. That's why it pays to look into a balance transfer. In a nutshell, the process involves finding a credit card with a rate that's considerably lower than what you're currently paying, and moving your debts over to it. Some balance transfer cards offer 0% interest for an initial period, so if you have good enough credit to qualify, you might conceivably get a one-year period or longer where you're not liable for interest at all. Another good reason to transfer your balances: Consolidating your debts onto a single card will make your payments easier to manage.

3. Cut expenses to free up cash

If you're coming off the holidays with a major debt load, you'll need to be prepared to cut corners temporarily to free up cash. If you don't already have a budget in place, create one -- it'll help you determine where you have room to reduce spending. From there, commit to making enough meaningful changes so you're freeing up a reasonable amount of cash. For example, if you owe $1,200 from the holidays, cutting back on two store-bought coffees a week will only save you about $24 a month, which will hardly make a dent in that balance. On the other hand, if you cancel your $100-a-month cable subscription and reduce your grocery spending by $50 a month, it'll help you make better headway.

4. Get a temporary side hustle

Unless you're willing to make major lifestyle changes, you'll need to do more than just cut a few expenses to pay off your holiday debt quickly. And that's where a side hustle can come in handy. Taking on a second job could easily put an extra $50 back into your pocket on a weekly basis without totally killing your social life or downtime. And if you're willing to make more of an effort, you could bring home $100 a week or more.

That extra cash, combined with your savings from cutting expenses, could allow you to eliminate your holiday debt in just a few months, depending on what you owe. And once that debt is gone, you'll be free to put the brakes on that side gig and reclaim more of your spare time.

The last thing you want to do is let your holiday debt drag on and on. If you're sitting on debt from the past holiday season, commit to eliminating it sooner rather than later. At the same time, start saving for the 2019 holidays as soon as you've paid off last year's debts so that you don't end up in the same boat the next time around.