There's a good chance it will.

At some point during your career, you're apt to reach a point where the notion of retirement becomes less of a dream and more of a reality. So, you might start planning to retire at a certain age, and that, in turn, might dictate the extent to which you save year after year until that point. But what happens when changes at your company or job compel you to retire early?

It's not a highly unlikely scenario. An estimated 56% of today's retirees left the workforce sooner than planned, according to recent data from Transamerica, and among that 56%, 54% cited job-related reasons. Specifically, 24% reported having lost their jobs, while 22% said that organizational changes within their companies caused them to leave unexpectedly. 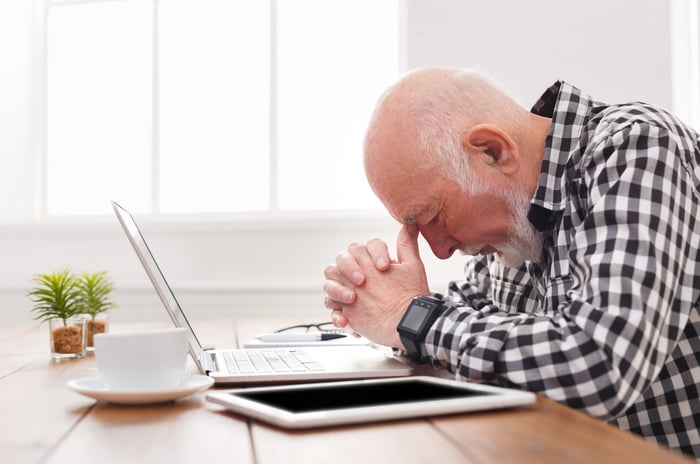 And let's not forget the 15% of seniors who retired sooner than expected due to unhappiness with their jobs. Seeing as how just 40% of the overall workforce is content at present, that's not a shocking statistic.

All of this leads to one key point: While you might plan on retiring at a certain age, circumstances at your place of work might result in a scenario where you're leaving your career behind earlier than expected. And if you don't plan for that possibility, you'll inevitably put your retirement at risk.

Don't wait to boost your savings

Many folks aim to retire at some point in their 60s, once Social Security eligibility begins and Medicare follows suit. But if things go sour at your job, you might find yourself out of work and unable or unwilling to start over much earlier in life.

Remember, the older you are, the more challenging it can be to find work, since age discrimination has a tendency to rear its ugly head. Therefore, if you're planning to do a bunch of nest egg padding during your 60s, you might want to ramp up sooner.

Of course, the longer you're able to work and save, the more substantial a nest egg you're apt to accumulate. The point, however, is to operate under the assumption that your career might get cut short, and take steps to save aggressively while you're still gainfully employed.

Securing long-term work on your own

While saving as much as you can from as early an age as possible will give you some financial protection in the event of an earlier-than-expected retirement, there's another way to buy yourself some long-term security: Get a side hustle. By building up a side business, you'll essentially be giving yourself a source of work to fall back on should you wind up having to leave your main career earlier than anticipated, whether due to layoffs, restructuring, or general on-the-job misery.

The great thing about working a side hustle is that you'll not only have access to extra income that can be used to fuel your nest egg, but you'll also have the option to carry that gig with you into retirement. And that, in turn, will serve as an extra source of income later in life, as well as a meaningful way to spend your time during your golden years.

We can plan for retirement as much as we'd like, but circumstances sometimes dictate that we have no choice but to change course. Since it's fairly common to be forced into early retirement due to job-related factors, your best bet is to save aggressively earlier on in your career while taking steps to secure a side income. And who knows? If you do a good job at both, you might end up retiring early not because you have to, but because you want and are able to.