As a parent, it's natural to want to be there for your children -- even once they're grown and have families of their own. But while it's one thing to offer your adult kids emotional support, it's another thing to offer them support that's financial in nature. A new study from Merrill Lynch and Age Wave, however, reveals that many parents are going overboard on the latter. 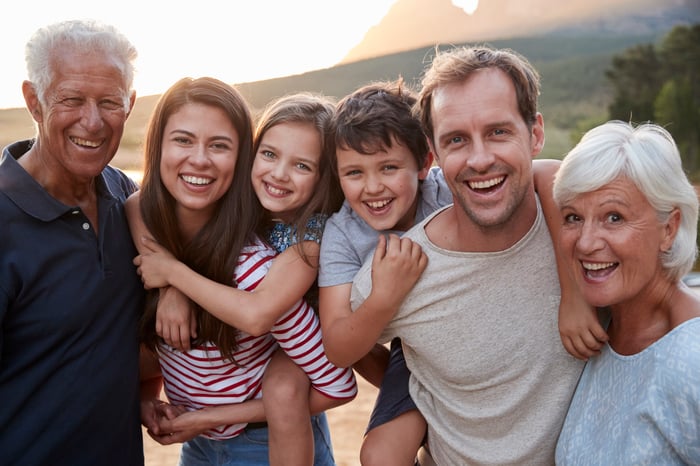 Are you putting your golden years at risk?

There's nothing wrong with helping your adult kids navigate their own financial lives if you can afford to do so. Most older Americans, however, are behind on retirement savings and can't afford to be spending more on their grown children than they contribute to their IRAs or 401(k)s.

On the other hand, the aforementioned numbers are just averages. The median retirement savings balance for households aged 50 to 55 is just $8,000, and for those aged 56 to 61, it's $17,000. And when you have a median that's considerably lower than an average for the same set of data, it means that most people fall well below the average. And that's why funding your adult kids' lifestyles is so problematic. Chances are, you need that money yourself to catch up on savings.

Imagine you spend your entire 50s giving your adult children $300 a month. If you were to put that money into an IRA or 401(k) for a decade instead and invest it an average annual 7% return, you'd boost your nest egg by about $50,000. And that's money that's bound to come in handy during retirement.

While Social Security will provide some income for you during your senior years, it won't be nearly enough to cover all of your bills. Therefore, if you have money to spare during the latter part of your career, it pays to put it into your own savings rather than use it to help your grown children.

Supporting your grown kids in other ways

While giving your adult children money to pay their bills is a move that could ultimately hurt you, that doesn't mean you can't support them in other ways. If you have a flexible work schedule, for example, you might offer to help with child care for your grandkids to save your own children money on day care or babysitters. Or you might allow your recently graduated child to live at home for a number of months to save money while he or she tackles whatever outstanding student loans are at play.

It's great to offer up support that doesn't cost you anything, but don't make the mistake of putting your adult kids' needs ahead of your nest egg. Remember, they have their whole lives ahead of them to earn more money, whereas you might only have a handful of years left to boost your savings before retiring. And contrary to what the guilty side of your brain might try to get you to believe, putting your own financial needs over those of your kids doesn't make you a bad parent. If anything, it makes you a responsible adult who doesn't want to risk struggling financially in retirement and having to rely on his or her kids down the line.