Please ensure Javascript is enabled for purposes of website accessibility
Log In Help Join The Motley Fool
Free Article Join Over 1 Million Premium Members And Get More In-Depth Stock Guidance and Research
By Maurie Backman - Jan 13, 2019 at 6:18AM

Though the tax deadline is still months away, it pays to get moving on your return much sooner.

When it comes to money matters, there are plenty of things Americans tend to procrastinate on -- and taxes are certainly one of them. Though the tax deadline this year is April 15, countless filers will no doubt wait until the very last minute to get their returns in order. A better bet, however, is to prepare your taxes ahead of time and avoid the stress so many people face when they realize they're behind. Here are three good reasons to file your taxes early this year.

1. If you're due a refund, you'll get it sooner

Most tax filers get a refund when they file their returns, and in recent years, the average refund has been upwards of $2,500. If you're expecting a hefty sum from the IRS this year, you should know that the sooner you file your tax return, the sooner you'll get that money. In fact, refunds for electronically filed returns are generally processed within three weeks, and if you sign up for direct deposit, you're likely to see your money even sooner. 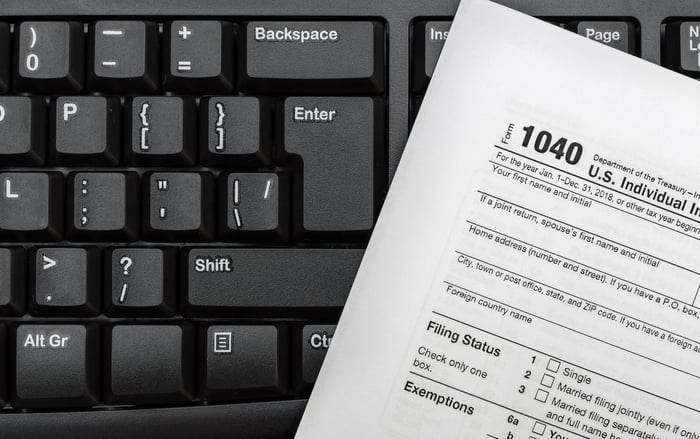 Now, one thing to keep in mind is that the 2018 tax year saw a major overhaul that included new withholding tables for employers to follow. As a result, many taxpayers might see smaller refunds this year than in years past. Still, it pays to get your hands on whatever money you're owed sooner rather than later.

Even though most tax filers get a refund each year, if your earnings took a big jump in 2018, or you made a lot of money from investments, you might land in the opposite scenario of owing money to the IRS. If that's the case, then the sooner you figure out what you owe, the easier it'll be for you to come up with that money by the April 15 deadline. If you owe taxes and don't pay them in full by April 15, you'll immediately start accruing interest and fees that will only cost you more money in the long run.

If you have plenty of money in savings and aren't worried about a last-minute tax bill, then you could conceivably push off your taxes a bit. But if you're like most Americans with little to no savings, coming up with, say, $500 or $1,000 to pay the IRS might be next to impossible with limited notice. The benefit of filing your taxes a few months ahead of the deadline is that it'll give you more time to scrounge up that cash should it become necessary.

For example, if you find that you underpaid your taxes in 2018 and therefore owe the IRS $600, you'll have about 10 weeks to come up with that money if you get your taxes done in early February. Wait until the last minute, and you might have to come up with $600 in just days.

3. You'll lower your chances of falling victim to tax fraud

Though the IRS has been cracking down on tax fraud, it's still a problem. You never know when a criminal might access your personal information, file a tax return in your name, and attempt to steal your refund. Filing your taxes early, however, can lower your chances of this happening.

The reason? The IRS has software that's able to spot duplicate returns. If the agency gets your return first, and then receives another one in your name that's filed by a criminal, that second return will be rejected, not yours. In other words, filing early can help you beat would-be criminals to the punch.

The sooner you get your taxes over with, the less stressful the filing season will be for you. The IRS just announced that it will begin accepting tax returns on Jan. 28, so be on the lookout for tax forms in the mail (or online), and make 2019 the year you finally get your taxes done ahead of schedule.