Please ensure Javascript is enabled for purposes of website accessibility
Log In Help Join The Motley Fool
Free Article Join Over 1 Million Premium Members And Get More In-Depth Stock Guidance and Research
By Maurie Backman - Jan 13, 2019 at 7:18AM

Hint: It's not a negligible amount.

The holiday season is often centered on giving and spreading joy, but for many Americans, that means overextending themselves and hurting their finances in the process. During the 2018 holiday season, the average American racked up $1,230 in debt, according to MagnifyMoney. That's a $176 increase from the $1,054 the average consumer racked up the previous year.

Not shockingly, the bulk of this past season's debt came in the form of outstanding credit card balances, with 68% of U.S. adults falling into that unwanted boat. Meanwhile, 14% of Americans took out personal loans to fund their holiday purchases. And let's not forget those good old store credit cards -- you know, the ones with notoriously high interest rates. They accounted for 10% of consumers' holiday debt in 2018. 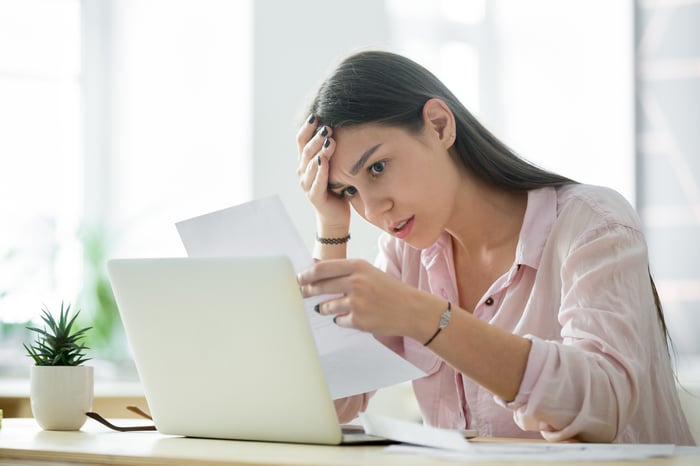 Not only are a large number of Americans in debt at present because of the holidays, but they're likely to stay that way for a while. A good 49% of indebted consumers say it will take them five months or longer to pay off debt from the 2018 holidays, including the 22% who say they can only manage to swing their minimum payments. And while 42% of consumers with holiday debt think they'll pay it off in three months or less, whether they're able to do so is yet to be determined.

If you're coming off the holidays with a wad of debt and a ton of stress to accompany it, it's critical that you tackle those bills sooner rather than later. Here are a few ways to go about it.

1. Cut back on expenses

You're probably used to spending a certain amount of money each month on necessities and nonessentials combined. If you're facing debt, you'll need to implement some serious reductions for the latter category and use that freed-up cash to pay off whatever loans or credit card balances you're dealing with. So take a look at your budget, or create one if you don't have one already; figure out how much you're spending on luxuries like cable, a gym membership, restaurant meals, and rideshares; and let the expense-slashing begin.

Millions of Americans work a side hustle to scrounge up extra cash for things like savings, retirement, and vacations. If you're grappling with serious debt following the holidays, getting a second gig is a guaranteed way to drum up extra cash to pay it off. The beauty of a side hustle is that your earnings from it won't already be earmarked for existing expenses, and as such, you should have no problem using them to diminish or pay off your debt.

3. Look into a balance transfer

The less interest you're forced to pay on your debt, the easier it'll be to eliminate it. With a balance transfer, you can roll an existing credit card balance (or several balances) onto a new card with a lower interest rate, thereby making your payments more manageable. Your chances of qualifying for a good balance transfer offer are highest if your credit score is strong, but even if it's mediocre, it's worth applying for nonetheless.

The longer you let your holiday debt linger, the more it'll cost you in the long run. As of November 2018, 15% of Americans were still in the process of paying off debt from the 2017 holiday season. If you'd rather not land in a similar boat this year, take steps to knock out your debt before it really starts to haunt you.